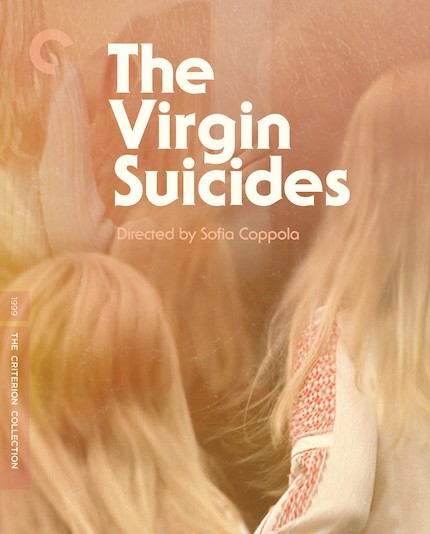 Sophia Coppola’s debut feature, The Virgin Suicides, has been given the 4K restoration treatment by the discerning folks at The Criterion Collection. Released last week here in North America, this release also comes with a combo Blu-ray with supplements and a legacy essay from novelist and screenwriter Megan Abbott.

I saw the film when it had its theatrical run in 1999. Between now and then, I’m glad to report that Coppola’s adaptation of Jeffrey Eugenides’ debut novel has lost exactly none of its effectiveness.

As the story goes, the five teenage Lisbon girls reject their home imprisonment, upper class society, and even their lives. The Virgin Suicides is a mid-1970s snapshot of girls trying to make sense of the cards they’ve been dealt, as well as the the neighborhood boys who were infatuated with them.

Spoilers: the youngest sister, Cecilia, attempts suicide at the onset of the film. She goes on to succeed in a brutal-yet-bloodless way (portrayed onscreen to us). The other sisters move on the best that they can, and things actually get better for them, though they’ve become things to gawk at, subjects to be reported about on the five o’clock news. The boys flock to them, as they’re all impossibly good-looking freaks born from the strange union of their nerdy math teacher Mr. Lisbon (James Woods) and the staunchly devout Mrs. Lisbon (Kathleen Turner).

The casting is one of the most interesting things about Coppola’s film; not only are Woods and Turner cast out of type, they shine in these more serious roles. The same goes for Danny DeVito, the brash comedian who plays Ceceila’s psychologist in a cameo role at the very start of the film.

There are a lot of names in the film, but Kirsten Dunst (Melancholia, The Power of the Dog) as Lux Lisbon steals the show here with her smoldering sadness and enigmatic pauses.

Similarly, The Virgin Suicides was the tipping point for a young Josh Hartnett, who had just filmed The Faculty. Here, he plays teen Lothario Trip Fontaine, who becomes Lux’s downfall, and the reason that all the Lisbon sisters become shut away in their home. A flash to the adult version of Trip Fontaine is played by Michael Pare (Streets of Fire) who’s now in addiction recovery, his glamor having been stripped away by poor life decisions, likely starting with the abandonment of Lux, the girl he claims to have loved.

Coppola’s careful treatment of the teen girl characters comes directly from her experience. She’d grown up painfully female, as all girls do, and had also dealt with the grieving process early on, from the loss of her brother Gian-Carlo.

The filmmaker renders her scenes with weight and time for characters to breathe, for the monstrosity of situations to render upon us in unflinching, extreme wide shots. But there’s also an excess of beauty here, within the craft of the film itself, no matter the mood and tone.

Coppola’s own screenplay from the source material is excellent, as is master cinematographer Edward Lachman’s (Less Than Zero, Carol, Erin Brockovich) images, movements, and shot choices.

And then there was Coppola’s choice to enlist French duo Air, who came aboard to drench the film in equal parts electronic teenage anticipation and loss of hope. The soundtrack is a staggering mood piece that settles over one like a shroud.

The 4K restoration is a work of art; overseen by both Coppola and Lachman, it looks absolutely wonderful. The sound remaster is also uniformly excellent.

The featurettes are all good, though I would have loved even more time from Lachman speaking about creating the look of the film and his use of visual metaphors. It was great to hear him talk about different color palette choices for filming the girls versus shots of the boys, and what that meant for the tone of those scenes.

While The Virgin Suicides is a masterpiece, it is at times, not an easy watch… particularly for those affected by deep depression. You can add the 4K/Blu-ray combo release to your home video collection by heading over to Criterion here.

More about The Virgin Suicides