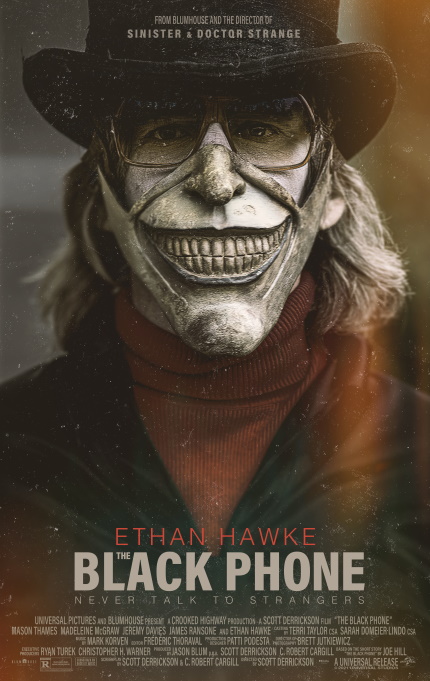 It’s 1978 and someone is abducting teenage boys in the suburbs of Denver. The police have no leads, no bodies, and no hope. When Finney (Mason Thames) disappears, he finds out what’s been happening to all of those kids, but there’s a disconnected telephone in the cement dungeon where he now spends his days, and it may be his way out.

Scott Derrickson’s The Black Phone is the latest mid-budget horror film from the director of Sinister, and his partner, writer C. Robert Cargill (Doctor Strange). Based on a story by Joe Hill (N0S4A2), The Black Phone is a very effective supernatural horror film that explores the lives of a pair of siblings coping with the loss of their mother, the alcoholism and despondence of their father, and a serial child killer who has separated them, perhaps for the last time.

Finney and his little sister, Gwen (Madeleine McGraw), live a mostly uneventful life. The older brother has spent much of his childhood as the timid target of neighborhood bullies, from whom both Gwen and his tough guy buddy, Robin (Miguel Cazares Mora) protect him the best they can. When The Grabber – the not terribly inspired nickname of the villain snatching up boys from the streets – gets Robin and then Finney, the boy has to grow up fast, and become the defender he always sought in others.

Locked in a subterranean dungeon, Finney plays The Grabber’s (Ethan Hawke) games in the hope of finding a way out. Though he’s there alone, he isn’t without help, as the broken black phone in the basement mysteriously begins to ring and Finney finds himself on the other end of the line of the boys who’d come – and gone – before him.

Derrickson’s film takes great pains to place the viewer in the milieu of the late ‘70s, an era of earth tones, raglan tees, kung fu theater on afternoon TV, and the increasing awareness of the evil that men do. By 1978, serial killers like Ted Bundy and John Wayne Gacy were already a part of the desiccation of the traditional American Dream. Hawke’s Grabber is certainly more of a character than those seemingly milquetoast monsters in the real-world headlines, but his presence still feels alarmingly plausible.

While it is Hawke whose name and face are all over the marketing for The Black Phone, this is really Mason Thames’ show. His Finney is forced to experience a range of wildly disparate emotions and paradigm shifts. Moving from a timid punching bag of a boy to a young man fighting to stay alive, he portrays a kind of dogged resilience that really comes through. McGraw is gifted with more than a simple little sis’ role, she’s the Yang to her brother’s Yin, and their sibling bond is a unique one, both in the story and on film, as we don’t often see children portrayed with this kind of empathy for one another.

The Black Phone relies heavily on the tension faced by Finney both alone in the basement and when confronted with the ghoulishly playful Grabber. Derrickson and Cargill craft an intense narrative that is enough to keep even the most hardened fans on their toes. While the ultimate outcome isn’t really in much doubt, the journey and methods are what really matters, and The Black Phone nails both of those aspects. This is an excellent example of the idea that storytelling is far more about the “how” than the “what”, and the “how” here is exceptional.

With excellent performances from all three leads – yes, I’m calling all three of them leads – as well as a stellar supporting cast of young talent as well as a solid turn from Jeremy Davies as Finney’s broken father, The Black Phone is a definite winner. Perhaps Derrickson’s exit from the MCU was a good thing, if we get more of these excellent terrors from this team, I think we all win.

More about The Black Phone