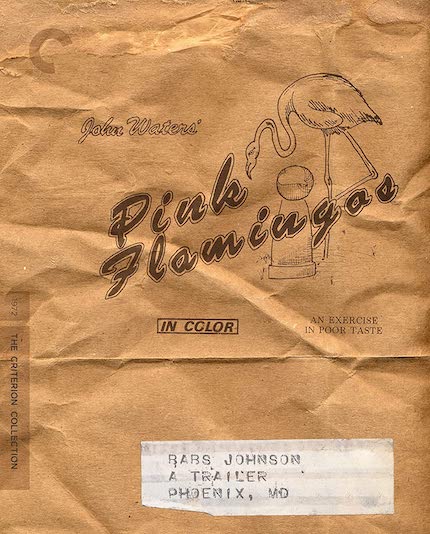 There is no greater purveyor and icon of shock cinema than Baltimore’s favorite son, John Waters. From his humblest beginnings making silent shorts in the late ‘60s, he’s always had his thumb firmly up the butt of good taste, but it was 1972’s Pink Flamingos that put him on the map and put the rest of the arthouse community on notice.

The story of one woman’s quest to be crowned the filthiest person alive, Pink Flamingos follows the feud between the Babs Johnson (Divine/Glenn Milstead) clan and the despicable duo of Connie (Mink Stole) and Raymond (David Lochary) Marble. Babs dabbles in theft, vandalism, incest, coprophagia all while looking absolutely fabulous and leading a demented crew of societal outcasts with predilections for bestiality, ovaphilia, and flashing. The Marbles, on the other hand prefer white slavery, kidnapping, black market babies, and arson. It’s a tight race for the crown, but Waters and his regular cast and crew make it all worthwhile for viewers looking to witness acts of depravity never before caught on film.

The onscreen conductor of this joyfully out of control shit train is Divine, a legendary drag terrorist who still cuts a mean profile nearly thirty-five years after his death. People talk about actors performing fearlessly in movies today any time things might seem the tiniest bit uncomfortable on screen, but no one was as fearless as Divine. Waters’ muse until his untimely death in the late ‘80s, Divine turns in one of cinema’s truly iconic performances in Pink Flamingos, with endless memorable moments that will never leave the psyche of the lucky viewer.

Divine was not alone, though, and with Waters’ company of Dreamlanders in tow, the American Dream was not safe. Stole and Lochary as the Marbles revel in their disgusting deeds, Babs’ cronies Crackers (Danny Mills), Cotton (Mary Vivian Pearce), and Edie (Edith Massey) obey her every whim and deliver Waters’ delightfully arch dialogue with incredible gusto. There’s no half-assing it in Pink Flamingos, it’s go-big-or-go-home, and when home isn’t all that great to begin with, you’ve gotta go huge.

I envy film fans who’ll see Pink Flamingos for the first time through Criterion’s new Blu-ray release, I can only imagine the cognitive dissonance as horror and glee fight for space in their brains as their eyeballs melt with wonder. I first saw the film in 1997 as it was making the rounds on its twenty-fifth anniversary celebration. As I sat in that ancient, uncomfortable seat in the historic UC Theatre in Berkeley, California having skipped school to drive an hour for the privilege, my life was changed. While home video is no substitute for the cinema, this is the next best thing.

Pink Flamingos makes its Blu-ray debut from Criterion, the latest in their John Waters collection, and it’s about as beautiful as it could possibly get. Sourced from a new 4K restoration, the film’s 16mm roots provide audiences with a very organic presentation, brimming with film grain that makes the very image itself come alive, and colors that pop exactly like they must’ve fifty years ago. The original mono audio track makes fine work of Waters’ delicious dialogue and the exceptional soundtrack of garage rock oddities for which the filmmaker has such an affinity. No complaints here.

For the film’s high-definition debut, Criterion has gathered several excellent archival extras as well as a couple of new pieces exclusive to this release. The most impressive of the supplements is Steve Yeager’s 1999 documentary, Divine Trash, a feature length film that explores the life of Divine and plenty of footage directly from the set of Pink Flamingos, where Yeager was an extra. While not as comprehensive as Jeffrey Schwarz’s I Am Divine from 2013, Divine Trash is more focused on Pink Flamingos in particular, making this an excellent acquisition.

Archival extras include several pieces from the 25th anniversary VHS release, which I owned and cherished back in the day (and Criterion’s ’97 laserdisc). Outtakes, deleted scenes, and a commentary track are all present and discuss the film in depth, definitely worth your time. A 2001 commentary track from the film’s initial DVD release is also included, both are solo Waters’ tracks and tread a bit of the same ground but differ enough for fans to indulge in both without feeling cheated.

New to this release is a conversation between Waters and Jim Jarmusch that runs roughly 30 minutes and treads the line between interview and friendly chat in a way that is inviting and informative. Also created specifically for this release is a location tour with Waters visiting a couple of his old haunts to try and discover the true location of Babs Johnson’s burned-out trailer as well as being invited into his old home (the Marbles place was in reality his and Mink Stole’s home) by a kindly metalhead who seems truly honored. It’s good fun, and Waters proves himself to be the ultimate raconteur when speaking with people about his trashy past.

Last, but not least, is the booklet, here in the form of a thematically appropriate foldout, featuring new writing from Howard Hampton that explores Waters career up to and including Pink Flamingos as well as putting his work in context of the artists both inspired from and inspired by it. Also included is a chapter on the making of Pink Flamingos from Cookie Mueller’s memoir, Walking Through Clear Water in a Pool Painted Black. This first-hand view of the creation of a wonderful nightmare is a fun read and welcome inclusion.

Do you feel this content is inappropriate or infringes upon your rights? Click here to report it, or see our DMCA policy.
John WatersDivineDavid LocharyMary Vivian PearceComedyCrime