VORTEX Interview: Gaspar Noé on Making a "Cruel But Warm" Film About Aging, Illness and Death 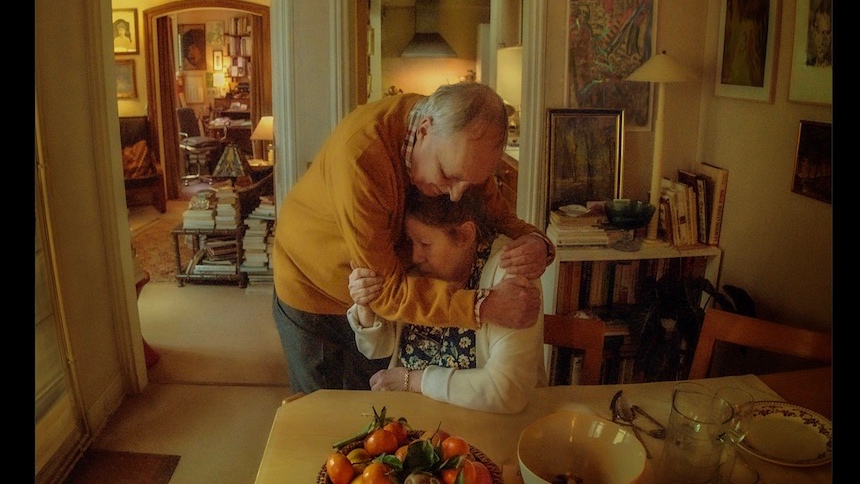 For example, the France-based filmmaker developed a passage from his first feature film, I Stand Alone, in a nursing home and emphasized the bleak thoughts about old age and death of the butcher played by Philippe Nahon, the character who appeared for the first time in the medium-length film Carne.

For the iconic Enter the Void, Noé took inspiration from The Tibetan Book of the Dead and captured a psychedelic astral trip in first person after the murder of the protagonist. His most recent film, Vortex, is an approximation to the twilight years of life centered on an elderly couple, played by Dario Argento and Françoise Lebrun. He’s a writer who years ago suffered a heart attack, while she suffers from dementia.

"Dementia is one subject that I know, I saw it: my mother lost her mind at the end of her life. I always thought it would be a good subject for a sweet psychological horror movie,” revealed Noé, who finally had the opportunity to carry out this idea during the COVID-19 pandemic. “The project came from a proposal from my producers, who asked me in January of 2021 if I had an idea of a movie that would be shot with two or three actors inside a closed space. Because during the confinement it was almost impossible to shoot a movie in a club or in the streets.”

Although Noé doesn’t consider the process to have been “different,” Vortex was completed quickly: “We found the location before the actors. My two first ideas were Dario Argento and Françoise Lebrun, so I ended up convincing them, and also I ended up writing a 10-page script that helped get more financing. Then I had to find the son, I knew this actor, TV comedian and film director called Alex Lutz, who looks a bit like a mix of the two of them (Argento and Lebrun), he agreed and suddenly I had the team to make this movie.

"We had to film it very quickly for economical reasons but also because the three of them had commitments with other projects just after. So the whole thing happened very quickly and was edited very quickly. Vortex was conceived at the end of January and we were delivering the movie at the Cannes Film Festival at the beginning of July.”

Vortex takes place mostly in the protagonists’ apartment. We see their day-to-day life and when their only son visits them. Throughout the film, the signs of love between the characters are evident, as well as the harshness of life itself. The mother usually wanders around the house or outside of it – putting herself at risk – feeling confused and afraid, sometimes not recognizing her loved ones.

The father works on a book about movies and dreams, sees a passage from Vampyr or tries to communicate with an old lover. He’s always prone to stress over his wife's situation. The son has his own demons, relating to his battle with drug addiction – another facet of a quintessential Noé theme –, he’s raising his own child while worrying and trying to help his parents but without much success: the dad in particular completely rejects the idea of leaving their lifelong home for a less risky environment in a nursing home.

Noé remembered thinking that “the whole story would be even more moving if the son, who should be taking care of them, is dysfunctional. You can tell that there are three characters suffering and not just one or two, the son is suffering for personal reasons but also is suffering from not being able to help his own parents.

"The movie is loving to its characters but it’s also a melodrama in which there’s no way out. The movie is cruel but it’s also warm because everybody is leaning on each other but no one knows how to solve the problem. There’s just no solution to the problem, which is the problem of the arrow of time and aging. Actually it’s not a problem because without the arrow of time no one would grow up. It’s always the same story.”

In 2012 Noé chose Michael Haneke's Amour – another film about old age, illness and death – among his all-time favorite films in the famous Sight and Sound poll. For Noé it’s important to reflect these themes on the screen because “it’s a big taboo how much people are afraid of losing control at old age. Most people are far more afraid of aging than of a nuclear war or poverty. That’s why there are not so many movies around that represent that part of existence.

"You see many movies about bank robberies, bank robberies almost never happen. Dementia happens in almost every family. The situations I lived inside my family are situations that almost every family goes through, sometimes is the father who dies before the mother, sometimes the other way around, sometimes people have Parkinson’s or they have another kind of cognitive disease… aging is not a joke, old age is not for cowards.”

Likewise, in Vortex, Noé continues to openly share his cinephilia: if in Irreversible the poster for 2001: A Space Odyssey is notable and in Love those of Taxi Driver, Salò, or The 120 Days of Sodom and Flesh for Frankenstein stand out, among others; posters for films such as Fritz Lang's Metropolis and Jean-Luc Godard's A Woman Is a Woman adorn Vortex's main location. “I feel like those guys are like friends even if I never met them personally. Rainer Werner Fassbinder is a close friend, I know him, I’ve seen his movies. Actually people think they know me because they’ve seen my movies, you knew me before we met,” said Noé.

Argento’s character, as I mentioned, is writing a book-length essay about the dreamlike quality of cinema and the movie theater, referring to Federico Fellini and Mizoguchi Kenji. ”I didn’t write his lines, he improvised those scenes. He used to be a film critic and he was talking on the phone with another film critic, a friend of his. I tried many times to find a book about the language of dreams transferred to cinema and I never found that book.

"So I thought it’s weird that no one wrote about that subject, probably one day I’ll try to write about that subject, but I spent too much time working in movies so I couldn’t find the time to write an essay about the language of dreams. I would love to read a good one about that, so I told Dario: imagine you were writing a book about that subject. I tried to get what he was writing with a pen but he was just pretending, he wasn’t really writing any essay,” Noé remembered laughing.

Prior to filming Vortex, the relationship between Noé and Argento – absolute master of giallo and Italian horror – went beyond the nods that Gaspar has given him in his cinema: he thanked him in the credits of I Stand Alone; used a Goblin theme song, original from Deep Red, in the key sequence when the condom breaks and changes the destiny of the protagonists of Love, and a VHS of Suspiria can be seen in the audition scene at the beginning of Climax.

Noé and Argento, in fact, have known each other for more than 30 years: “I met him in Toronto, I think it was in 1991. I was showing my 39-minute movie called Carne there, before I did I Stand Alone I had done a movie with the same character. The guy who was taking care of the Midnight Madness section introduced us, I had dinner with him and then he liked the movie, said can I help you with your first feature? And then we became friends.

"He lives in Rome so I wouldn’t see him often, but I would run into him in other movie festivals and I became close to his daughter Asia in Paris. Then he came to my editing room when I was editing Irreversible. I would talk to him from time to time, if I was going to Rome I would call him, if he would come to Paris sometimes he would call me, sometimes not.

"It’s a long term friendship that ended up with this proposal. It didn’t take me much time to convince him to be in the movie, but what really made him happy is that I came saying: you’re going to take care of your own character, I’m not going to write you any lines, I’ll take care of the camera. So he didn’t feel pressure. Also we discussed about Umberto D., the movie by Vittorio De Sica that he loves and I love.”

The other Italian connection in Vortex is related to the use of music, part of the essence of Noé's style. On this occasion, the name of the legendary Ennio Morricone stands out since the credits, which with Noé usually appear at the beginning of his films. A painful sequence involving the son and those demons from the past that never go away, is accompanied by a Morricone composition. 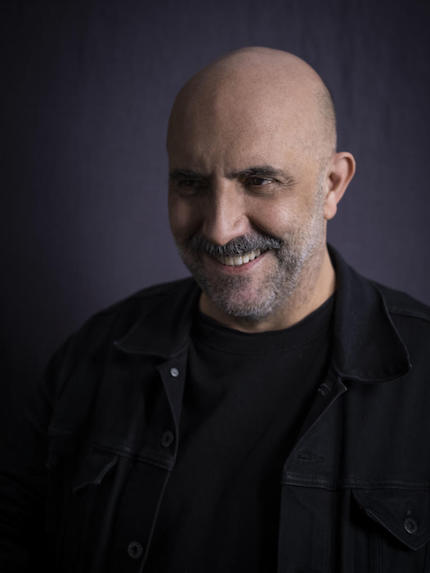 “There are two pieces of Ennio Morricone in the movie, one while they are discussing and the other one in that scene. It was not lean to the spaghetti western or anything like that. I just was editing the movie and I heard that music, someone sent me a short film and they had used that music, I said what the fuck is this great music? I ended up using Shazam and I found out that it was the music of My Name Is Nobody – titled “Se sei qualcuno e’ colpa mia”.

"So for the scene in which the son is smoking heroin again, it added some stress that was so efficient. But I was not thinking of the western, I just was thinking of how good it was working on that particular scene. Then we got the rights. Ennio Morricone had done music for Dario, he’s the master of the music soundtracks in Italy and so productive, I don’t think there’s ever been a musician as productive as Ennio Morricone,” Noé pointed out.

Vortex makes use of the split screen, a resource that Noé has been exploring since the medium-length film Lux Æterna, starring Béatrice Dalle and Charlotte Gainsbourg: “Because I had done with split screen Lux Æterna and then this other movie that you can find on the net, Summer of ‘21, [a stylish short for the fashion house Saint Laurent with Charlotte Rampling and the song “I Feel Love” nonstop], I thought that I could use the same language for Vortex. The split screen would fit much more to this story than even the two other films that I had done before.”

If in Lux Æterna – which advocates cinema as art over industry – the split screen reflects the chaos of the shooting of a film about witch hunt, in Vortex it ends up powerfully representing absence. Vortex is, without a doubt, a film about mourning and how inevitably “time destroys everything.”

“In real life when you lose someone that is very close to you, for months and months there is something missing, the whole day you feel like something is missing next to you. It’s a graphic way to represent it. Death reminds you that we’re living in a dream that is floating above the void. The more you see people dying around you, the more the whole experience of existence seems like a dream,” Noé concluded.

Distributed by Utopia, Vortex is now playing in theaters in several US cities. For more information, visit its official site.