This April saw the return of the Amsterdamned Film Festival after two years of postponements and cancellations due to lock-downs. And what could be a better way to open such a long-missed event than with the world premiere of a Dutch Covid-19-inspired psychological thriller? For that is exactly what director Chris W. Mitchell's film The Revelation is.

At the start of the story, it's February 2020 and while the news pays some attention to the new disease which is spreading out of china, fifty-something IT-manager Jacob is sure of it: this is going to be the mother of all pandemics.
Having recently lost his father, who he revered, Jacob is obsessed with the thought that he might now lose his mother as well, because the disease appears to be especially harmful to the elderly. Jacob takes drastic action: he quits his job and moves in with his mother, to make sure she will stay safe. His mother is puzzled and thinks he's exaggerating, but on the other hand it's nice to have someone in the house again, taking care of her, so she allows Jacob to basically lock her up in her own house. 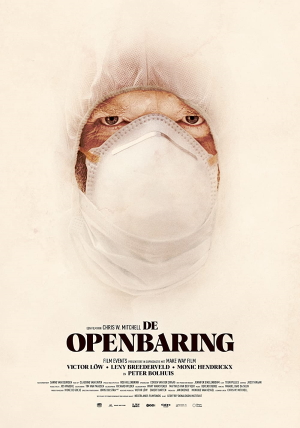 Jacob may have been a bit quick on the draw that early in February 2020, but he's not wrong: Covid-19 grows into a worldwide danger, and as the weeks turn into months and the death-toll rises, country after country goes into full lockdown, the Netherlands included. Never the most social of people, and now 100% convinced he's always right, Jacob spends his nights on the Internet, navigating himself into ever more radicalised forums. When the first cases of "long covid" are mentioned in the media, Jacob knows for sure: those people have somehow been irrevocably changed, and pose a danger...

As a film, The Revelation is very much a locked-in event itself: you're basically watching two people in the same house for most of the running time. Whether or not this makes for a good watch is wholly dependant on the portrayal of Jacob. Is he believable as a character, and even if he is, isn't it boring to watch him for 93 minutes? Thankfully, with a smart script and the availability of a fantastic lead performance, director Chris W. Mitchell avoids the pitfalls. Jacob is played magnificently by Victor Löw, who also was involved with the script. A former mental care patient himself, Löw had the idea of trying to show why people sometimes do things that seem completely crazy. After several rejected attempts, the pandemic with its lockdowns gave him a viable background for his intended performance. We all now know more-or-less how bad you feel when shut in. The isolation, the fear of contamination, the moving of your life (professional and otherwise) towards an on-line existence, former friends becoming crazy people on the Internet... We've all known these things of course, but we sure know them a lot better now.

It's this shared experience which makes The Revelation hit as well as it does. As a thriller it is a claustrophobic slow-burner, and you know where Jacob will eventually be going with this, but watching him move there is a source of suspense in itself. Actresses Leny Breederveld and Monic Hendrickx provide strong support, and veteran actor Peter Bolhuis has a few nice moments as Jacob's deceased father. But let there be no mistake: this is Victor Löw's film, front and center. Löw's Jacob is irritating, funny, sometimes touching, sad, and in the end, scary. And as with most good movie monsters, he is pathetic.

This is Chris W. Mitchell's second feature film as a director, his previous film being The Pool, which I reviewed favorably back in 2014. With The Revelation being a good film as well, he's now scored two out of two. I'm looking forward to his third.

The Revelation is currently playing in Dutch cinemas and will be represented at the Cannes Film Festival the coming week by Incredible Film (Danielle Raaphorst at Riviera J8, https://incrediblefilm.com/en/).

Do you feel this content is inappropriate or infringes upon your rights? Click here to report it, or see our DMCA policy.
Chris W. MitchellPeter BolhuisLeny BreederveldEline HavenaarThriller