Review: DOCTOR STRANGE IN THE MULTIVERSE OF MADNESS, Sam Raimi Puts His Stamp On The MCU With Style 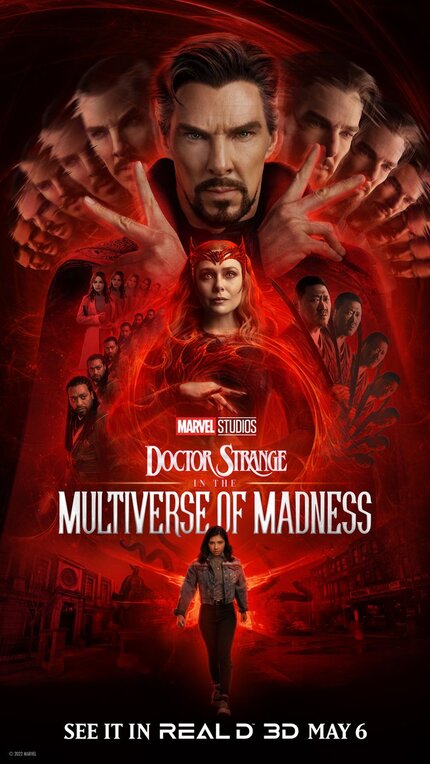 The latest in the unending labyrinth that is the Marvel Cinematic Universe hits theaters this Friday, and if it weren’t for Sam Raimi returning to the superhero fold, this writer probably wouldn’t have given Doctor Strange in the Multiverse of Madness a second thought. The increasingly complex and demanding world of Marvel properties is very intimidating, and I will admit to emotionally checking out a long time ago, but if nothing else good comes from this content factory, it has resulted in a few of my favorite filmmakers being given an immense sandbox in which to frolic, leading to idiosyncratic needles in a mind-numbing haystack over the last decade. So, I’m willing to give the occasional factory farmed product the benefit of the doubt.

The latest chapter in the Dr. Strange saga comes on the heels of the surprise popularity and significance of the character following the Infinity War saga, last year’s serial hit WandaVision, and the first post-Covid (*) theatrical Marvel success, Spider-Man: No Way Home. For a marginal hero in the vast galaxy of Marvel stars, it’s kind of surprising the Benedict Cumberbatch’s Dr. Strange has this kind of pull in the MCU, but they seem willing to do interesting things with the character, so I’ll allow it.

In this latest entry, Strange has the responsibility of protecting America Chavez (Xochitl Gomez) foisted upon him. Chavez has the unique ability to travel freely between dimensions of the multiverse (a concept that already bores me, but I’ll let it slide), and is being pursued by a very determined Wanda Maximoff AKA Scarlet Witch (Elizabeth Olsen), who covets that power for very selfish reasons. Of course, this seemingly very personal conflict has unfathomable potential consequences, so the galaxy of magic purveyors in the Marvel Universe are called in to shut it down. However, that’s easier said than done; so begins our journey through the multiverse to stop the Witch and save Chavez.

A lot of the plotting is very typical MCU nonsense. Dialogue is forced to drag the audience through a recap of multiple associated properties to make sure the audience is up to speed (I was not), and make sure that they mention as many connections as possible. Frankly, keeping up with the MCU is more of a chore than a joy these days, but with Raimi at the helm, I soldiered on.

We dip and dive from dimension to dimension, frequently with very splashy accompanying CG sequences to guide us. Crowd-pleasing cameos dot the film, with several eliciting very vocal responses from my audience (made up solely of journalists, I might add), frankly, it’s the kind of thing we expect from Marvel films these days. Thankfully, Raimi is able to wrest control of the visuals from the formula on enough occasions to make this a genuinely fun experience, even for folks like me who have mostly given up on the genre.

Raimi is in top form here, given an unusual freedom to manipulate the Marvel formula to fit his unique sensibility. While filmmakers like James Gunn (Guardians of the Galaxy) and Taika Waititi (Thor: Ragnarok) shaped their own entries largely through character and dialogue, Raimi’s style is uniquely visual, and that comes through here. Fans will delight at the references to the best moments in films like Evil Dead 2, Army of Darkness, Drag Me to Hell, and perhaps even his first attempt at a superhero film, Darkman. It was a joy to watch Raimi exert his vision in this highly conscripted universe, especially when it felt just slightly out of control and anarchic.

Those of us who have become wary of the Marvel juggernaut but find the Raimi connection intriguing will be rewarded in the Multiverse of Madness. I’m certainly no Marvel fanboy – as several of my Twitter mutes will confirm – but I will happily concede that Raimi has absolutely made this film his own, complete with wonky camera angles and dutch crash zooms. That doesn’t even bring the incredibly fun surprise appearances in the alternate universes, cartoonish musical battles, Evil Strange flying zombie attacks, or the shocking amount of visceral gore into account.

Doctor Strange in the Multiverse of Madness was billed as the first MCU horror movie from the start, and while it doesn’t quite live up to that promise, it comes pretty damn close. Raimi does a great job of bridging the gap between the standard entry and his own screwball, splatsick, horror vision. Coming at this from the perspective of a hard genre fanatic, there’s certainly more here to love than to loathe. Yes, the plotting is unnecessarily dense and relies of knowledge of a dozen other existing properties, but it’s also a whole lot of bloody fun. Eyes are gouged, limbs severed, corpses reanimated, and multiple heads explode, so I’ll call it a win for the frustrated gorehounds. It may not be perfect, but it’s entertaining and I don’t regret sitting through every last minute – a claim I cannot make for most Marvel products.

Do you feel this content is inappropriate or infringes upon your rights? Click here to report it, or see our DMCA policy.
Sam RaimiMichael WaldronStan LeeSteve DitkoBenedict CumberbatchRachel McAdamsElizabeth OlsenActionAdventureFantasy