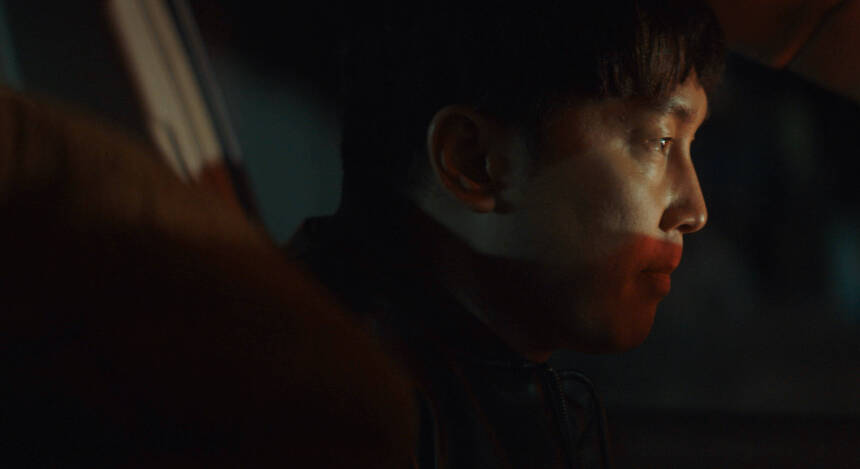 Money can make people do funny things. It compels them to trust the wrong people, drives them to makes risky bets or, when all else fails, forces them to act out of desperation. Yet unlike riding a bike, when it comes to money experience doesn't always make us wiser. In the grim and gripping night-gone-wrong thriller Thunderbird, which had its world premiere at the Far East Film Festival in Udine this spring, greed pushes desperate characters to cut all the wrong corners.

In this feature graduation project from the Korean Academy of Film Arts (KAFA) by director Lee Jae-won, the proverbial bag of money the story spins around is the titular Thunderbird, a souped-up jet blue Audi 44 with a spoiler on its back and, according to its owner Tae-min (Lee Myeong-ro), a large stash of cash hidden somewhere within it.

Tae-min is a devil-may-care youth who we first meet bloodied up in the backseat of his own car as debt collectors drive him to a pawnshop in dusty Jeongseon, a sleepy county in Gangwon Province whose economy is largely tied to a local casino. We know this thanks to his older brother Tae-gyun (Seo Hyun-woo), who recently returned from Seoul for mysterious but seemingly unfortunate reasons. Tae-gyun is a taxi driver who automatically drives his out-of-town fares to the gambling hall as soon as he picks them up, as there's nowhere else to go.

Tae-min's car his pawned for 5 million won (about $4,000) but that's not enough to cover his debt and he has until midnight to come up with the rest of it. His only option is to seek out his brother as well as his street worker girlfriend Mi-young (Lee Sul), and together they try to raise the money to get the key to his car back and retrieve the gambling winnings he claims lie within.

What follows is a night that quickly goes from bad to worse as the diametrically opposed Tae-min and Tae-gyun can do nothing but compound their situation with each new action they take. As the beleaguered debtor, the trouble starts with Tae-min but even though he's determined to retrieve his Thunderbird, his casual attitude and utter lack of moral compass stand in stark opposition to Tae-gyun, a bundle of jangled nerves keeping several secrets close to his chest.

The emotional divergence of these mismatched siblings is amusingly illustrated the first time they meet on screen. Tae-gyun rushes to Tae-min's aid when he calls for help, only to find him barefoot and barechested, calmly sifting a stream for his shoes and phone in the dead of winter.

Tae-min's plan to pay off his debt is a predictably quixotic one, but where Thunderbird excels is in the careful calibration of its characters. Tae-min is the larger-than-life lead that sets the story in motion, but the reserved Tae-gyun is the one who provides the story's best surprises as it winds through its nocturnal odyssey.

There are hints throughout, such as Tae-gyun's mysteriously bandaged hand (we never find out how he injured it) and during a car chase he suddenly pulls the Drive-esque manoeuvre of killing his lights and drifting to safety in a construction yard.

In a subsequent scene, the film signals a brewing change within Tae-gyun when light streaming through his taxi's windshield bathes him in a kaleidoscopic mix of neon lights, but predominantly a deep red that cuts an aggressive line across his face.

Prolific indie stalwart Seo Hyun-woo (Aloners) delivers another strong, edgy and vulnerable performance as Tae-gyun. Seo shows us many sides of his character but one of his chief skills as a performer is that he gets the job done and then some without hogging the limelight, affording his co-stars all the opportunities to stand out as well.

Director Lee keeps his finger on the pulse of the story, squeezing anxiety out of the premise and keeping it going throughout. Beyond his careful consideration of lighting, Lee also seems to have paid particular attention to the film's soundscape, with crisp sound effects stumbling into the soundtrack and cranking up the tension at all the rights moments.

Thunderbird is another promising graduation project from KAFA and with any luck director Lee will be afforded a chance in the commercial arena soon.

Do you feel this content is inappropriate or infringes upon your rights? Click here to report it, or see our DMCA policy.
far east film festivalfeffkafakorean academy of film artskorean indieudine