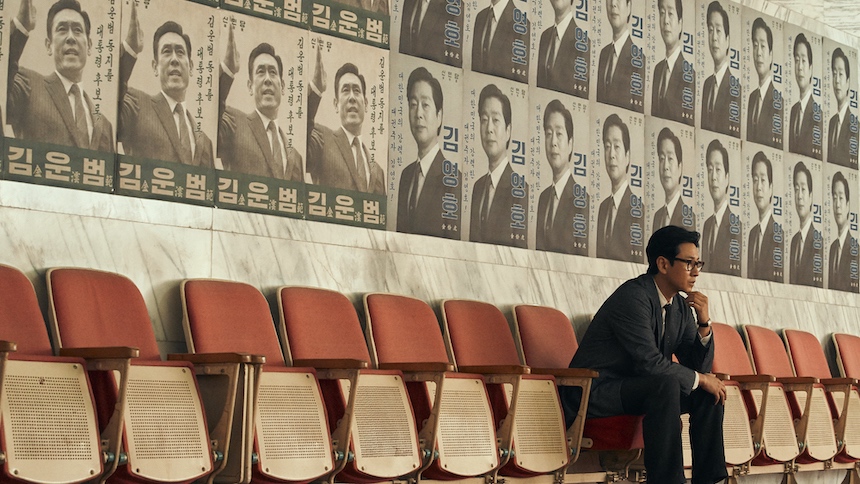 The easiest way to describe Kingmaker, the latest film from The Merciless director Byung Sung-hyun, is as the Korean equivalent of George Clooney's election drama The Ides of March, a film that incidentally used the English word 'Kingmaker' as its local title.

Despite the clear narrative similarities between the films, however, which each chronicle the burgeoning relationship between an idealistic politician and a younger campaign strategist which eventually decays owing to differing election philosophies, it's unfair and reductive to compare them, for the simple reason that Kingmaker is a better film.

The title of the film refers to Seo Chang-dae, played by Parasite's Lee Sun-kyun, a pharmacist in a harbor town in the early 1960s who harbors an ambition to do something more with his life. He also possesses a keen mind for strategy and manipulation, which he soon puts to the test after meeting the local politician Kim Woon-bum (Sul Kyung-gu). Woon-bum is an idealist who desires to give a voice to the people, presently suffocating under the might of an unbendable military regime.

Woon-bum has the ideas but what he lacks is the political acumen to find his way to elected office. By the time Chang-dae turns up in his ramshackle office asking for a job, he's already lost a string of elections. Working in the shadows without an official title, Chang-dae spices up Woon-bum's campaigns and turns a string of losses into a stream of victories.

Ten years later, Woon-bum raises his sights to the highest political office in the land as he seeks to secure his party's nomination for the upcoming 1971 presidential election. He needs Chang-dae's help to do so, but he has grown increasingly wary of this kingmaker's aggressive tactics, which he feels make him no better than the corrupt cogs of the broken system he is trying to repair.

In spite of their scuzzy specifics, Chang-dae's tactics are undeniably effective, but he is forced to remain in the shadows, ever deeper, even as Woon-bum's star rises to the national level. A rich and frequently arresting mixture of lighting, cinematography and production design limns the growing chasm of this power imbalance.

In one two-shot, even as they sit beside one another, a frustrated Chang-dae is clearly shown to be in Woon-bum's shadow in the frame. This is one of several instances in the film where Cho Hyoung-rae's full-bodied camerawork blends with Lee Gil-gyu's deep lighting and Han A-reum's richly realized sets to push the story forward in memorable visual ways.

Director Byun, knocking it out of the park for the second time in a row, pulled off a similar dance of style and substance in his slick and propulsive Cannes-invited gangster drama The Merciless five years ago, which also featured Sul as a lead. The only element of the production that doesn't sing is the scoring, which feels out of place and cheapens the mood in certain scenes.

Chang-dae and Woon-bum are loosely based on election strategist Eom Chang-rok and the Korean politician Kim Dae-jung, who would eventually serve as Korea's 8th president from 1998 to 2003. While many of the details, backgrounds and characters are fictionalised, the rotten core of the relationship remains; Eom eventually parted ways with Kim and went to work for the opposition, military dictator Park Chung-hee, Korea's strong-arm ruler for close to two decades.

The specter of Korea's turbulent modern political history adds an edge to the film, particularly for local viewers, but Kingmaker elides any deep political philosophising. Instead it's a richly drawn character study that encapsulate the 'opposites attract' adage, set against a frequently thrilling backdrop of electoral strategising and malfeasance.

Given the importance of the central relationship, Lee and Sul have a lot of heavy lifting to do and they are more than up to the task, with both adding to an impressive recent run of roles - last year Sul received some of the best notices of his career for his role in Lee Joon-ik's The Book of Fish.

While Kingmaker doesn't explore the nuances of Korean period political philosophies in great detail, its story about idealism against the propagandist political machine finds its parallels in present-day Korea. The country currently finds itself racked by societal divides, many of them manufactured for political currency, much like the regional tensions that are fanned by political operatives in the film. Beyond the prosaic but undying struggle between liberalism and conservatism, Korea is currently in the throes of intense, bitter and seemingly unsolvable feuds between generations and the sexes.

While these social parallels add another dimension to the film, it succeeds ably without any knowledge of them as Kingmaker is easily one of the most satisfying commercial works to come out of Korea since Parasite.

Do you feel this content is inappropriate or infringes upon your rights? Click here to report it, or see our DMCA policy.
Chong-ok BaeJeon Bae-sooKoreaLee Hwa-RyongSung-hyun ByunUdine Film Festival