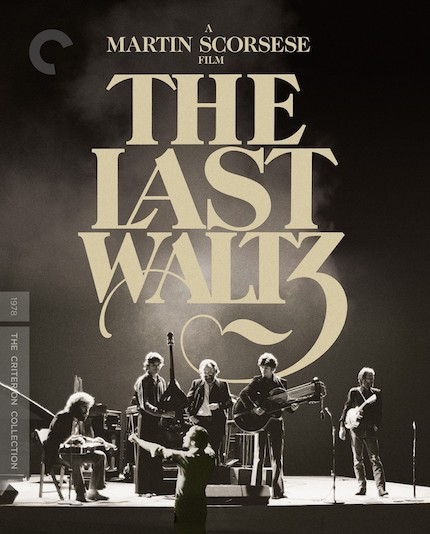 In reviewing the jaw-dropping induction of Martin Scorsese's The Last Waltz into the Criterion Collection, one must begin with its remarkable cover art.

It’s a photograph that I have never seen before -- this coming from someone who has seen A LOT of photographs of The Band -- and it's one that says a great deal about the moment it has captured… easily a thousand words, though perhaps Mavis Staples said it best with just one, “Beautiful”.

In the photo, we see Scorsese directing his subjects for the final scene of the film. Everyone in The Band, songwriter/lead guitarist Robbie Robertson, bassist/vocalist Rick Danko, organist, Garth Hudson, and pianist/vocalist Richard Manuel all look to their maestro Marty with seeming enthused complicity in his framing of their final performance together. The odd man out is drummer/vocalist Levon Helm, who some consider the heart of the outfit (as if any one person was capable of holding that mantle), looking away forlornly. He’s a man with an incredibly rich and lovable heart, and it is not in this farewell project.

This will be the final word on the subject of Levon Helm vs The Last Waltz in the entire Criterion package, from the film itself, which sidesteps the band dynamics leading up to the breakup, to its supplemental features, new and old. And so in keeping with the winking cover art acknowledging the enormity of the topic that its wonderful package will not be touching with a 10-foot pole, we move past the film's tragic aspect and dive into the celebration of it all.

To call The Last Waltz the greatest rock and roll film of all time somehow feels like an understatement. It’s more like a miracle fusion of 20th century American culture, as if the births of roots music, the recording industry, and the art of motion picture all culminated in this marathon celebration of, not just a band, but a dying pastime.

The strength of any documentary tends to first and foremost be gauged by the strength of its subject, so it's worth stating that had Robertson simply set up a few 16 mm cameras, as initially planned, people would still be talking about the footage today. However, by instead enlisting the help of Scorsese, who at the time had more than his hands full with New York, New York, but nevertheless felt duty-bound to accept the mission, the material is elevated into the realm of the celluloid gods.

No music documentary has ever been so thoroughly thought out as was The Last Waltz with its 200+ page shooting script meticulously detailing the exact position of its seven 35mm cameras, each one operated by a legend -- from Marty’s first-hand man, Michael Chapman, to cinematographer-extraordinaire, Vilmos Zsigmond -- over the course of an exhausting five-hour concert.

Consequently, Marty’s grand vision for the event delivers the best coverage you could possibly ask for in capturing the evening in all its glorious autumnal thanksgiving hues. From his choice to neglect almost all audience shots to the careful situation of his cameras, inducing a behind the stage dolly track that would only be useful for a small handful of shots -- one of which being my personal favorite in the whole film (during the outro of Van the Man’s "Caravan") -- every decision made is driven by an operatic pursuit to present each moment of the surprise-filled performance as effectively as possible. Edited with an admirably unintrusive patience that allows the audience to truly lose themselves in the performances, the film is constructed in a way that lends a feeling of being some privileged omnipresent eye into every nuance of this loaded event.

The film is rounded out with endearingly downhome interviews, the highlights of which involve Band members Rick Danko and Richard Manuel getting into the spirit of the cinematic endeavor,  as well as wonderful sound stage performances featuring production designs by West Side Story’s Boris Leven, who also decorated the Winterland stage.

Beyond the tragedy that something beautiful is coming to end, the elephant in the Winterland is the energy of the evening itself, offering the best and brightest musicians of a generation a true occasion with which to rise to all under the trustworthily watchful eye of Scorsese, over-prepared to catch every moment of spontaneous joy. And joy and jubilation are exactly what is on display throughout this film. Even Helm, who vehemently disagreed with the breakup and its big Hollywood documentation, couldn't help but deliver a career-best performance.

So for me, when it comes to the film’s highlights, I gravitate toward the “accidents” born out of the once-in-a-lifetime energy mystically fueling the endeavor. Moments like Eric Clapton’s guitar strap falling off inadvertently, causing Robbie to jumpstart one of the all-time great dueling guitar sessions, or the show-stealing exuberance of Van Morisson, which saw “the Man” spiritedly performing in rare form, and finally, my personal highlight of the film: Dylan, the lone troubadour, dragging his first band into "Baby Let Me Follow You Down".

After a highly dramatic evening of concern over whether or not Bob would take the stage at all, angry as he was at Roberston for calling it quits, it’s nothing short of rattling to see the lifer of the road, who, unlike Robbie, continues performing to this day on a self-proclaimed never-ending tour, howling how he’d “do anything in this Gawd-almighty world if (they’d) just let him follow (them) down”. For Dylan, there will be no calling it quits. His term on the road is a life sentence.

Robertson spends a lot of the film accounting for his decision to ‘disBand’. He probably spent a lot of the rest of his life accounting for it too. One can’t fully blame him for not wanting to allow his treasured band to continue past the point of vibrancy and health. After all, as he says during the film’s peak, when a low-key performance of "Old Time Religion" takes us into the triumphant final "Night They Drove Old Dixie Down", “It’s not like it used to be…”. True as that was, particularly considering the declining health of the band’s sparrow, Richard Manuel, the casually heartworn rendition of "Old Time Religion" on display is still one of the greatest things I’ve ever seen, as are the performances of every song they played that night.

But there’s no use in fretting over the what-ifs of long-dead possibilities, nor does much good come from mourning the dead. As Scorsese long ago concluded, The Last Waltz, and all the holy souls and moments contained within, was and remains a jamboree best celebrated. So three cheers to The Criterion Collection for properly bringing the timeless party into the 21st century. Here here!

I wasn’t able to preview the special 4K UHD disc of the film presented in Dolby Vision HDR, which is available to those who purchase Criterion’s double-disc edition, but if the 4K restoration is any indication, it’s hard to imagine it will be possible to see a more spectacular looking version of this film. Audio-wise, the package offers two sound mixes, both the original 1978 2.0 surround mix as well as 2001’s uncompressed stereo mix, which will be especially appreciated by those who faithfully adhere to the film’s infamous and highly accurate opening instructions: “This film should be played loud”.

In terms of the supplements, the brand new features consist of an enlightening 30-minute interview with Scorsese conducted by critic David Fear, and a vintage clip from the film’s 1978 release, in which Robertson and Scorsese guest on some forgotten night show called 90 Minutes Live (for 15 minutes). They’re both solid, enjoyable additions to the supplemental canon, but if you’ve already devoured the 2002 DVD past the point of playability, as I have, you probably won’t learn anything groundbreaking.

This brings us to one of the more fascinating aspects of this collection: revisiting the 2002 features after 20 years. The newly remastered footage from the lengthy encore jam featuring all of the evening's exhausted performers remains priceless. The Robertson/Scorsese featurette -- your typical early aughts DVD featurette -- offers a tight dose of the basic BTS beats. And the two audio commentary tracks are great… but the first supposed audio commentary is a cut-up of two separate interviews with Robertson and Scorsese, but only Robertson seems to be actually watching the film. The Scorsese audio offerings, while valuable, appear to be lifted from the featurette’s outtakes.

The second classic commentary remains the supplemental prize-pig. Back in 2002, I was very excited to be hearing from such a wide array of subjects, from Band-members Levon Helm and Garth Hudson, to journalist/Band friend Jay Cocks, journalist Greil Marcus (whose book about The Basement Tapes is a fan must-read), creative consultant Mardik Martin, executive producer Jonathan Taplin, associate producer Steven Prince, cameraman Michael Chapman, music producer John Simon, New York, New York producer Irwin Winkler, all the way to performers Mavis Staples, Dr. John, and Ronnie Hawkins. But listening to this commentary track again 20 years later, in a world without Levon Helm or Dr. John, and with Garth Hudson having reportedly seen better days, one can’t help but get a saddening sense of the unrelenting passage of time.

All in all, what more can one hope for from an ultimate edition of The Last Waltz than a pristine transfer, every archival interview available artfully compiled for your supplemental pleasure, and a hard-hitting presentation of an all-time great soundtrack worthy and demanding of being played LOUD? For me, not a goddamn thing. So, to once more borrow a sentiment from Mavis Staples, Criterion’s presentation of The Last Waltz is indeed “beautiful.”

Do you feel this content is inappropriate or infringes upon your rights? Click here to report it, or see our DMCA policy.
documentaryMartin ScorseseThe Criterion CollectionThe Last WaltzUS

More about The Last Waltz