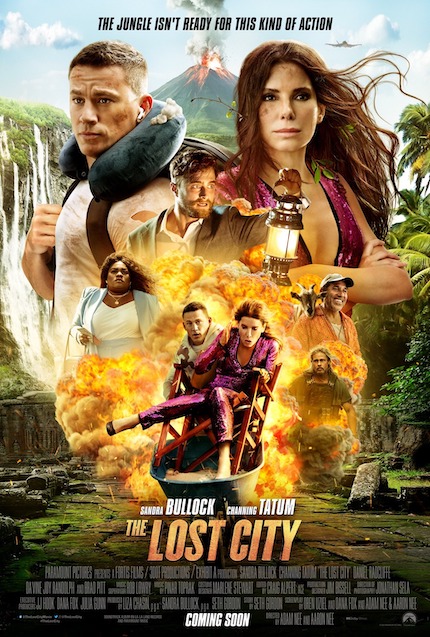 It’s something of a welcome sight when a relatively big budget, star-studded adventure/romantic comedy somehow makes it to a multiplex instead of going straight to VOD or streaming.

It matters less than it once did, however, that the said relatively big budget, star-studded adventure/romantic comedy, The Lost City, isn’t particularly novel, original, or inventive, often feeling like a modernized remix of Romancing the Stone and Raiders of the Lost Ark (among others), relying on all manner of jokes (some good, some not), physical humor (including at least one gasp-worthy shock), and the lively chemistry of its two leads, Oscar winner Sandra Bullock (Ocean’s Eight, The Blind Side) and Channing Tatum (the Magic Mike series).

When we first meet Bullock’s character, Loretta Page, an ultra-successful romantic novel, she’s on a downward spiral, the result of a tragic, off-screen loss, the unexplained death of her husband  a year earlier, and a major writer’s block, presumably born out of boredom with the co-heroes of her soon-to-end romantic adventure series. That 20-book series has turned the ever-present cover model, Alan Caprison (Tatum), into a Fabio-like pop-culture figure with a rabid fanbase of his own. Sporting a blond wig, carefully cultivated abs, and a shaved, hairless chest, Alan represents every possible romantic cliche, but he’s perfectly fine with it, especially since it pays the bills and affords him a certain level of fame or notoriety.

Like practically every Tatum character before him, though, Alan isn’t exactly bright or well-educated. An incurious, small-town boy who made good in the big city, Alan’s content coasting on whatever he earns from his work as a cover model and appearances with or without Loretta, who Alan manages to unintentionally disrespect and insult at every turn despite, of course, having romantic feelings toward her he can’t express, setting up a not unexpected conflict between Loretta and Alan, where Loretta can’t see beyond Alan’s bod to the loving lunkhead underneath and Alan, eager to live up to his fictional counterpart, fails to impress Loretta at every turn.

In more or less short order, Loretta and Alan’s future together or apart takes a backseat when Abigail Fairfax (Daniel Radcliffe, Swiss Army Man), an artifact-collecting billionaire with Daddy issues, kidnaps Loretta outside her hotel. While Fairfax hopes to convince Loretta to help him find the long-lost “Crown of Fire” referenced in her latest romance novel (based, it turns out, on her and her late husband’s archeological work), Alan bumbles and stumbles into action, enlisting the aid of Jack Trainer (Brad Pitt in a hilarious extended cameo), an ex-Navy SEAL turned chill mercenary with a specialty in search-and-rescue operations, and the apparent financial support of Beth Hatten (Da'Vine Joy Randolph), Loretta’s best friend/chief publicist while Allison (Patti Harrison), Beth’s awkward, tart-tongued, social media-obsessed assistant, keeps the millennial jokes coming at periodic intervals.

Eventually, all but Allison end up on the fictional “Isla Hundida” (literally, sunken island), a tiny, volcanic isle somewhere in the middle of the Atlantic Ocean. In a deliberately parodic plot development, a soon-to-erupt volcano adds a note of urgency to Fairfax’s desperate decision to kidnap Loretta and force her to translate centuries-old parchment that might reveal the location of the actual Crown of Fire. Just as predictably, Alan and Jack arrive on the island, though co-directors Aaron Nee and Adam Nee (Band of Robbers, The Last Romantic) make Alan’s continuing ineptitude a running joke that unfortunately ends too early before Loretta essentially takes Jack’s place in the plan to rescue Loretta and jet off the island before Fairfax and his predictably disposable henchmen stop them.

Mixing live locations (the Dominican Republic subbing in for Isla Hundida) with over-obvious, head-scratching soundstage/greenscreen work, including several egregiously sub-par reshoots, The Lost City is nothing if not breezy, lightweight entertainment, mixing and matching familiar elements (cue nostalgia highs) along with fast-paced, well-plotted storytelling and, most importantly, a chance to see Bullock and Tatum do their comic sparring thing. In a surprise to exactly no one in the audience, Bullock and Tatum are both better than good at delivering snappy, one-liners and displaying just the right level of irritation bordering on hostility with each other without turning that hostility into outright hatred.

Even a flat, predictable ending does little to undercut the goodwill Bullock and Tatum generate when they’re onscreen together. For some, that will be more than enough to recommend The Lost City.

The Lost City opens in movie theaters Friday, March 25 via Paramount Pictures. Visit the official site for locations and showtimes. 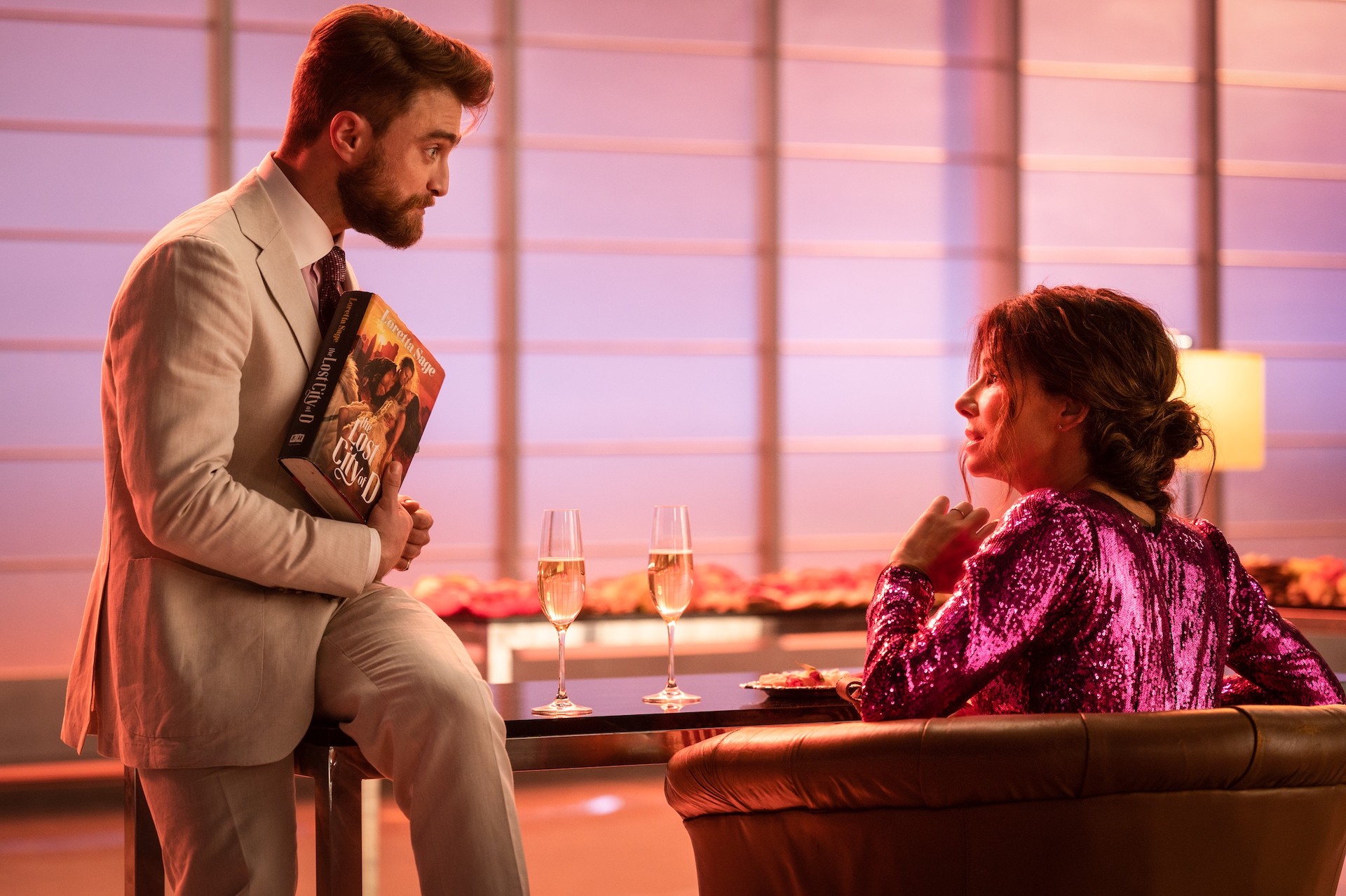 Do you feel this content is inappropriate or infringes upon your rights? Click here to report it, or see our DMCA policy.
Aaron NeeAdam NeeBrad PittChanning TatumDaniel RadcliffeSandra BullockThe Lost City