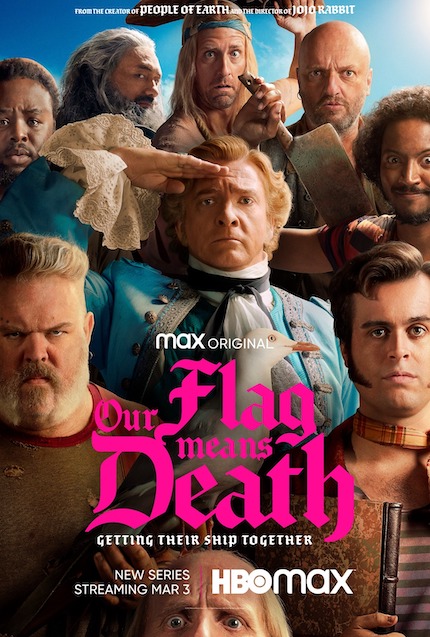 I've been following director Nacho Vigalondo since the world premiere of his first feature, Timecrimes, at Fantastic Fest in 2007, which our site's editor, Todd Brown, recommended.

Before that, the Academy Award-nominated Vigalondo made his name with his wildly imaginative and frequently very funny short films. In the years since then, he's made several feature films and a whole bunch of shorter films, television shows, and so forth.

Thus, it was an unalloyed delight to realize that he directed the second and third episodes of Our Flag Means Death, the new series from creator David Jenkins. Taika Waititi is on board as an executive producer, directed the first episode, and also co-stars as Blackbeard, the legendary pirate.

Inspired by a true story, Rhys Darby stars as a wealthy landowner who has a midlife crisis and decides to leave his wife and children behind to sail the seas as a pirate. It looks like such good fun!

He is in no way prepared to behave like a 'traditional' pirate, to the befuddlement of his experienced crew. I won't detail all the ways that this show is very, very funny, but if you've enjoyed Rhys Darby's comic performances in the past, as I have, I'm pretty sure you will enjoy it too.

Blackbeard himself barely appears in the first three episodes, though a preview suggests he will become more central to the plot in the next three. I can't wait. (P.S. Nacho Vigalondo appears briefly in the third episode, to delightful effect.)

Joe vs. Carole
All eight episodes are now streaming on Peacock TV.

Unlike the rest of the world, I did not watch the documentary series The Tiger King on Netflix at the beginning of the pandemic in 2020. (I had canceled my subscription the previous month, which is either really good or really bad timing.)

Thus, watching the first episode of a new series, which is not based on the Netflix series but instead a podcast by Robert Moor, and created by Kate McKinnon, who stars as Carole Baskin, I felt like I kept missing hints and references that might be very obvious to someone who was familiar with the true-life story of an epic battle that quickly developed between a zoo operator and an animal rights activist.

John Cameron Mitchell stars as Joe Exotic, the tiger guy, who appears to have a genuine love for animals and gentle affection for the motley collection of people who work with and for him, but an absolute distrust and disdain for anyone who goes against him. He has a brusque personality that doesn't always serve him well and a thirst for righteous vengeance, at least in his own eyes.

Kate McKinnon's turn as Carole Baskin appears to be 90% empathetic with her goals and work, but 10% cynical and questioning, which makes her performance fascinating to watch. Kyle MacLachlan appears as her husband, and as much as I always enjoy watching him and McKinnon work their magic, I had no desire to binge all the episodes at once, though they're all available.

In the first episode, Joe Exotic comes across as a sincere yet repellent personality, and something seems a little off about Carole too. If I keep my Peacock TV subscription active, I'll probably end up watching the whole series, more out of an interest in what McKinnon and MacLachlan are doing, rather than the story itself.

The Dropout
The first three episodes are now streaming on Hulu.

This is another case where a performance is of greater interest to me than the story. I've read extensively about Elizabeth Holmes and the blood-testing company she founded, Theranos, to the point that I felt like I didn't care to see anymore about it.

Even so, Amanda Seyfried captures the evidently elusive and highly-motivated Elizabeth Holmes to a mesmerizing degree. Not that I know the person in real life, but the descriptions I read about her always seemed to focus on her beauty, as in a 'stunningly good-looking woman who carried herself extremely well and sold a bunch of wealthy men a load of hogwash and inspired people to work their fingers to the bone to help her make everyone's lives better.'

The true story is something else. I don't know that The Dropout tells the truth, the whole truth, and nothing but the truth, but director Michael Showalter (The Eyes of Tammy Faye, The Shrink Next Door) is very skilled at balancing the dramatic and comic elements of her distinctive personality. You have my attention.

Star Trek: Picard
Season 1, in its entirety, and the first episode of Season 2, are now streaming on Paramount Plus.

As it happens, I just finished watching Picard, season one, and so I was primed to watch the first episode, which resets the table for what is to come.

Patrick Stewart is sterling (again) as Jean-Luc Picard, whose firm resolve was tested repeatedly throughout the first season. He's now been given a new lease on life and is the head of Starfleet Academy in San Francisco, which any Trekkie will know can only be a short-lived reprieve.

And indeed it is. Picard is once again summoned into action, familiar supporting characters from the past return again, as in the first season, and new dangers enter stage left.

It's been a very busy week in the streaming world, but I don't want to go without acknowledging the much-anticipated shakeup in the world of anime streaming services.

As reported Tuesday by Variety and many other sites, Crunchyroll has begun adding all content from Funimation. Sony, which already owned Funimation, will be phasing it out, along with VRV, which is a combo service that I subscribed to in the past.

For now, the monthly Crunchyroll price is remaining the same (US $7.99), so I've resumed my subscription for the two-week trial period, just to see how it goes. So far, it looks very good, very nifty, and very easy.

I canceled my subscription to VRV some time ago, chiefly for economic reasons last year, and waited to resume to see what Sony would do with the two competing streaming services. Now they are one, a giant service, that is. The next anime season begins in April, but I'll have to wait and see how much time and energy I can devote to it.

Many many anime shows now streaming on Crunchyroll.