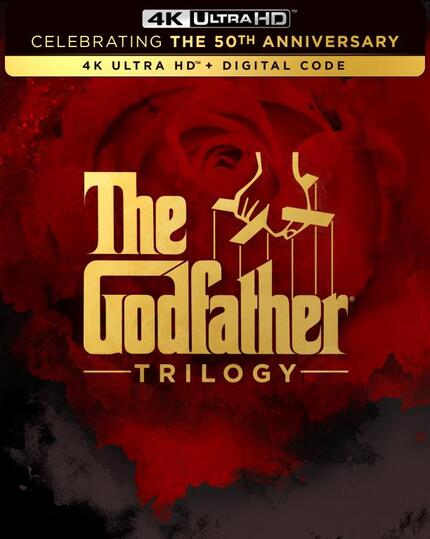 Out this week in North America from Paramount Pictures comes the brand-new 4K edition of Francis Ford Coppola's classic films, or at least some of them, The Godfather, The Godfather Part II, and The Godfather Part III, which comes in both the theatrical cut, Coppola's 1991 Director's Cut, and the newly re-edited version, titled Mario Puzo’s THE GODFATHER, Coda: The Death of Michael Corleone.

All films were restored under the direct supervision of Coppola and his company, American Zoetrope in concert with Paramount for the 50th anniversary of the original film.

The set collection comes in two versions; the widely available 4K UHD set which I received, as well as an even more deluxe version, which comes with a hard-cover, coffee table book --- with photographs and portraits printed on archival paper.

There are five glorious discs of Godfather films and extras, all you can pile up on your plate. One disc entirely filled with featurettes also sports some new bonus material. This is in addition to the awesome legacy featurettes, ported over from the last major release and restoration.

I'll just do the quickest of recaps, as you likely know exactly what happens in this most classic of stories and cinema, a nearly-sublime blend of immigrant, crime, and family themes. In the first, original The Godfather, we follow Al Pacino in his star-making role as Michael Corleone. We see him from young, celebrated WWII hero through to his rise as the ultimate Mafia crime boss, taking over the family business from his father, the notorious Don Vito Corleone, played by Marlon Brando.

In The Godfather Part II, the film intercuts between Michael's ongoing war within the world of crime, his trials and insane tribulations, to the earliest beginnings of his father Vito, here played by a young, excellent Robert DeNiro.

I can't say that I watched all three versions of the third movie, but I did settle in for Coppola's new cut, Mario Puzo’s THE GODFATHER, Coda: The Death of Michael Corleone, which has flashes of brilliance among it.

Sound on all three films is excellent. Picture is nearly uniformly great as well, especially when you put on the comparison featurettes on the restoration and see the painstaking process. That said, the original is 50 years old, and some elements were missing or have been damaged in the long road from the early '70s until now.

There are many instances of crushed blacks, particularly in the first film in those shadowy office scenes. I'm uncertain if this is a compression issue with my UHD TV, but I don't usually see this unless I'm watching a very old film on a bad transfer. But these scenes will not take away from your enjoyment of the films, especially for casual viewers.

The second one has similar issues, but legendary director of photography Gordon Willis shot in such a way (this is explained in one of the extras) that the film's look could not be tampered with. It was always meant to look extremely dark, something that Paramount's executives had trouble with.

Anyway, the images still look shockingly good, particularly in scenes shot in daylight, which simply gives more visual information to the eye. It's an outstanding release; these films have never looked better on home video.

·       Introduction to The Godfather by Francis Ford Coppola

·       Capturing the Corleones: Through the Lens of Photographer Steve Schapiro— In this reflective and frank discussion, special photographer Steve Schapiro shares his unique perspective and cherished memories as a witness to the making of this seminal film.  Commentary on curated archival images makes for a fascinating, never-before-seen addition to the production’s history.

·       The Godfather: Home Movies— An assortment of 8mm home movie footage shot in 1971 offers a candid glimpse into the production of The Godfather.  Shot on location at the Norton family estate on Staten Island’s Emerson Hill, this is the first time it’s been made available to the public.

·       Restoration Comparisons— Before and after highlights showcase extensive picture quality improvements to The Godfather.

You'll also get digital copies included in the set, if all this isn't possibly enough!

I really enjoyed watching the bonus content, and highly recommend all of this for both collectors, film fans, and especially film students.

To add this awesome 4K UHD set to your collection, simply shop wherever you usually do; this one won't be hard to find. Check out the trailer below for some classic, Coppola crime flavor.