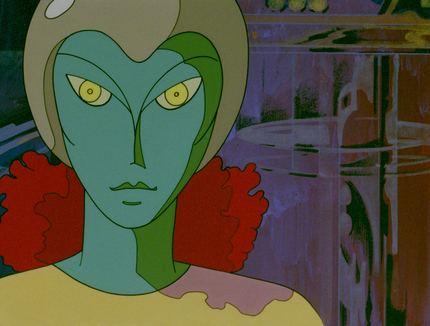 Boutique cult distribution company Deaf Crocodile has made quite a name for itself in a very short time. Following up on their stunning release of Jean Louis Roy's The Unknown Man of Shandigor, and the announcement of their ongoing Russian Fantastika line, they are bringing surreal Romanian sci-fi animation Delta Space Force to Blu-ray this February!

Made in 1984, Deaf Crocodile describes the film as:

Delta Space Mission  (1984, 70 min.) from directors Mircea Toia and Călin Cazan. Best described as an early 80s Eastern European space-prog album high on sugary breakfast cereal, Heavy Metal magazine, Hanna-Barbera cartoons and 8-bit arcade games like Galaxian and Asteroids, all of these elements will give you some idea of the otherworldly weirdness of the Romanian animated sci-fi film Delta Space Mission. In the year 3084, Alma, a Modigliani-esque alien journalist with blue-green skin, boards a state-of-the-art spacecraft named Delta whose highly advanced computer brain develops a mad teenage crush on her with disastrous results.. (In Romanian with English subtitles).

The disc will include a brand new 4K restoration along with "a new interview with co-director Călin Cazan, an essay by acclaimed comic book artist and film historian Stephen R. Bissette (Swamp Thing), and two rare episodes from the Delta Space Mission short film series."

This film looks like a definite winner for fans of surreal animation like that of René Laloux' Les Maîtres du temps, and I can't wait to check it out. Check out the restoration teaser below and gird your pocketbook!