Tom Holland and Mark Wahlberg star in an adaptation of a video-game series, directed by Ruben Fleischer, opening exclusively in movie theaters. 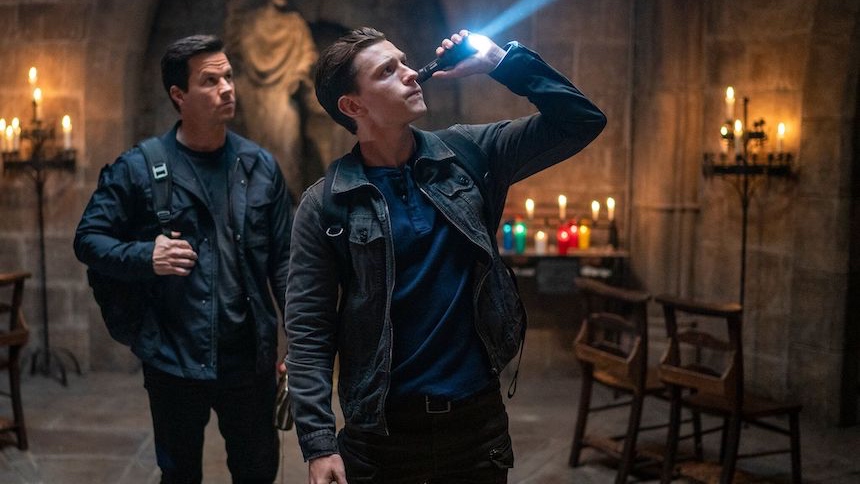 After more than a decade in development, multiple false starts, and the unexpected pandemic-related delays, the big-screen, big-budget adaptation of Uncharted, the long-running, action-adventure videogame series created by Naughty Dog for the PlayStation console, finally arrives in North American multiplexes with, at best, muted expectations and, at worst, no expectations at all.

With box-office hits limited to legacy sequels and the Superhero Industrial Complex, there’s little room for or interest in another franchise starter/wannabe, but that hasn’t stopped Sony/Columbia Pictures from releasing Uncharted during the relatively uncrowded second month of the new year. Whether the combination of the videogame series’s longtime fanbase and Marvel-Sony’s once and future Peter Parker/Spider-Man, Tom Holland, will guarantee a reasonable rate of return for its makers, launching an all-new franchise in the process, remains in question.

Uncharted opens in media res, with Holland’s character, Nathan Drake (deliberately de-aged to match Holland’s maturity or lack thereof), clinging to life and limb aboard a cargo plane. Inadvertently ejected from the plane and hanging on the plane’s barely tethered cargo, Drake has to fend off a small squad of faceless, disposable henchmen and the laws of gravity to avoid hitting terminal velocity without a parachute.

It’s a tried-and-true, yet extremely effective way to immediately pull the audience into Uncharted. We don’t need to know much about Drake, only that he’s fighting for survival and we’re fighting right next to him (though, of course, as passive watchers and not as active participants if we were playing the videogame version). Beat by action beat, it’s an electrifying, enthralling piece of action filmmaking that’s only marred by occasionally variable CGI.

Unfortunately, it amounts to a “save the best for first, not last” scenario. It’s so exhilarating that director Ruben Fleischer (Venom, Gangster Squad, Zombieland) hits the pause button before the scene ends, hits the rewind button, and drops the audience into a “15 years earlier” flashback, as a preteen Nate (Tiernan Jones) and his older brother, Sam (Rudy Pankow), attempt to break into a museum, steal a map, and slip out before they’re caught.

Of course, they’re caught, forcing Sam, an adventurer by nature, to leave Nate behind at the children’s orphanage that they called home after the unexplained demise of their parents. Sam promises to return at some undetermined time in the future, leaving Nate with a family heirloom, a ring with their family motto written in Latin, before escaping into the night and out of the film.

Back in the present, Nate works as a bartender at a high-end NYC bar, charming unwary women, stealing their jewelry when their guard's down, and running into Victor “Sully” Sullivan (Mark Wahlberg), a man who claims he not only knew Sam, but teamed up with Nate’s long-lost brother on a globe-trotting hunt for billions in centuries-old, Spanish gold. Nate initially rejects Sully, but soon enough, they’re a two-man team with deep-seated, unresolved trust issues, setting up a seemingly doomed-to-fail heist of a rare Spanish antiquity, a gold-covered, jewel-encrusted cross, from an auction house and the clutches of an amoral Spanish billionaire, Santiago Moncada (a barely awake Antonio Banderas), and Moncada’s security chief and chief enforcer, Jo Braddock (Tati Gabrielle).

The gold cross, however, is only part of a set and that set, when used in conjunction, will connect to a multiplicity of clues that lead Drake, Sully, and sometime ally/foe Chloe Frazer (Sophia Ali) from Manhattan to Barcelona and the Philippines. Along the way, the central duo have to avoid not just Moncada and Braddock, but various Indiana Jones-inspired traps, obstacles, and their own mutual mistrust.

Everyone, we’re repeatedly told, can’t be trusted, not when billions in lost gold are lying somewhere out there, ready to be found, catalogued, and sold to the highest bidder for maximum profit. (Uncharted doesn’t spend much time arguing about, let along acknowledging, the legal, moral, or ethical implications of thievery involving antiquities that belong to nation-states, not individuals.)

Given its status as a prequel or origin story for Drake, Uncharted spends (and expends) a considerable amount of time and effort establishing Drake’s love-hate, trust-impaired relationship with the older, perpetually furrowed-brow Sully, an obvious brother stand-in or substitute. The underwritten script heavily relies on a steady stream of quips and faux-barbed dialogue between Drake and Sully that rarely rises above the tolerable and too often dip into lowest-common-denominator territory. When your best running joke or gag involves a cat, Mr. Whiskers, that Drake gifts Sully as a one-off prank, it’s either a good sign or fair warning, depending upon your weakness for feline-related humor.

Uncharted’s big emotional moment badly misses the mark, not least because of its groan-inducing predictability and rush to move onto the next big set piece. Likewise, the undercooked on-again/off-again romantic relationship between Drake and Foster. A shirtless Drake isn’t enough to ignite Foster’s interest in getting intimate, yet another indication of Hollywood’s continuing unwillingness to depict even the faintest glimmers of physical intimacy between presumably consenting adults.

As age-appropriate co-leads, Holland and Ali aren’t completely devoid of chemistry whenever plot mechanics push them together onscreen. They have more than enough for several romantic comedies. It’s a pity, though, that their relationship immediately cools down the moment physical connection becomes even remotely possible possible.

For all of its lack of ambition and reminders of older, better films that share its DNA (from Raiders of the Lost Ark, National Treasure, The Da Vinci Code, and back again), Uncharted isn’t entirely unenjoyable. Despite its middling pretensions and filmmaking-by-committee approach to a franchise wannabe, it still manages to deliver a handful of passably entertaining set pieces, a linear, easy-to-understand plot, and more than a few callouts, callbacks, and shout-outs to the videogame series that made it all possible. And with Holland channeling his inner Peter Parker once again, Uncharted is rarely less than watchable.