Review: DOG, Getting There Is All the Fun 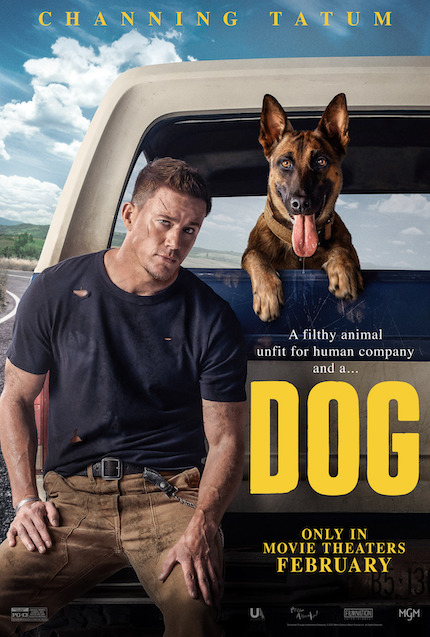 "It's the journey, not the destination." -- Anonymous.

Briggs is not yet accustomed to civilian life.

Declared medically unfit to return to military service, Briggs (Channing Tatum) remains determined to rejoin his fellow Army Rangers. It's the only life he's ever known, prompting him to jump at a sliver of hope offered by his former commanding officer.

The C.O. tells him that fellow Ranger Riley Rodriguez (Eric Urbiztondo) has died and his family has requested that the military-trained dog he handled be present at the funeral a few days hence. The dog refuses to fly and has resisted repeated attempts to be handled; thus, if Briggs can deliver him to the funeral on time -- from Oregon to Arizona -- his C.O. informs him that he will make a telephone call on Briggs' behalf to the medical review unit, opening up the possibility that Briggs can return to the military.

With that kind of motivation, Briggs packs the dog into the back of his S.U.V. and heads off on the adventure of a lifetime! (Note: your mileage may vary.)

Directed by Reid Carolin and Channing Tatum, based on a story by Carolin and Brett Rodriguez, the film draws evident inspiration from Deborah Scranton's 2017 documentary War Dog: A Soldier's Best Friend, on which Carolin and Tatum served as executive producers. (The movie is now streaming on HBO Max.) Driven by an undoubtedly sincere desire to honor animals who received extensive training before serving in active and often dangerous military operations, Dog is unflaggingly episodic, inventing a variety of obstacles that arise on the road trip, which covers about 1,500 miles.

Along the way, Briggs' personality gets fleshed out. Beneath his 'tough guy' veneer lies a heart that has a difficult time connecting with or understanding the civilian population. He remains unfailingly polite and endeavors to restrain his instincts, even as others act on their emotions. Lulu, as the Belgian Malinosis is named, begins the trip with a lot of unresolved anger and anxiety issues herself, which to some degree parallel what Briggs is experiencing, although to a different extent.

I love road movies in general, especially nowadays, and Dog is shot with lilting beauty by exceptional director of photography Newton Thomas Siegel (Cherry, Drive, to cite just two) and directors Carolin and Tatum ensure that a light touch is always present. As familiar as the dramatic arc of the story may be, the film's intent adds a measure of weight that rests easy upon its slender frame.

Do you feel this content is inappropriate or infringes upon your rights? Click here to report it, or see our DMCA policy.
Channing TatumMGM StudiosReid CarolinUS