Review: DEATH ON THE NILE, More Than Enough Champagne to Fill the Nile 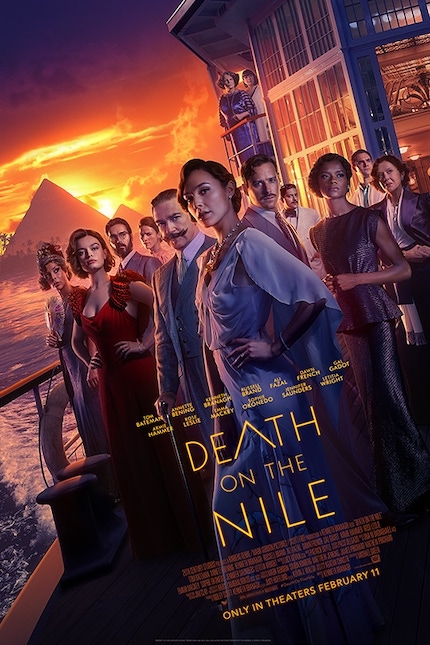 If there was an Academy Award for Best Facial Hair in a Motion Picture, Kenneth Branagh’s magnificent, marvelous, majestic mustache as Agatha Christie’s peculiarly Belgian detective, Hercule Poirot, in Branagh's utterly delightful 2017 adaptation of Murder on the Orient Express would have not only been nominated (an honor by any definition), it certainly would have won going away.

There isn’t an Academy Award in that made-up category, of course, so Branagh and Poirot’s gloriously cultivated facial appendange had to settle for mostly positive critical reviews, and more importantly, appreciative audiences around the world who helped push Murder on the Orient Express to unexpected box-office success for a period adaptation based on decades-old intellectual property (IP), IP authored by a long expired, crime-mystery novelist.

In a non-surprise, Branagh’s producing partners at the soon-to-be-defunct 20th Century Fox greenlit a sequel, Death on the Nile, moments after looking at box-office receipts. Between studio-related delays (Disney’s protracted purchase of 20th Century Fox), credible assault allegations against one of the sequel’s stars, Armie Hammer, and a global pandemic entering its third full year, a planned release in the fall of 2019 eventually turned into a theatrical release almost two years later. Only time — and box-office returns comparable to Murder on the Orient Express’s final numbers — will tell whether those delays, some intentional, some not, has curbed audience enthusiasm sufficiently to make a third, big-screen go-around with Christie’s detective possible, if not probable.

While Murder on the Orient Express ended with a twirl of Poirot’s mustache, a gleam in his eye, and a line of dialogue referencing Death on the Nile, the sequel goes back to the beginning (more or less). When Poirot makes an entrance, he’s more than 20 years younger (a de-aged Branagh) and a farmer-turned-soldier, fighting to avoid becoming another casualty in the Great War (World War I). Thanks to his big brain, Poirot comes up with a plan that manages to save his platoon from almost certain death.

Unfortunately for Poirot, though, a mustached senior officer loses his life. Poirot survives, but at the cost of major facial damage and scarring. A not-quite-justified suggestion from Poirot’s unusually cheerful significant other (“I know, grow a mustache!”) gives Poirot his trademark facial hair. It's an origin story of sorts and adds a superficial layer of psychological complexity usually not found in Christie’s novels and stories about the Belgian detective.

Before you can type “fast forward,” Death on the Nile jumps ahead two decades (still no Nile, alas) to a Poirot in the full flower of his career as a celebrity detective. Practically acting as his own hype man, Poirot speaks of himself in the third person, up to and including citing his own great works as a detective.

Yet another fast-forward finally takes us to Egypt and a sumptuous resort hotel for Westerners. A presumably vacationing Poirot finds himself at the resort hotel at exactly the same time as the Ridgeway-Doyle wedding party.

Eventually, the wedding party boards the SS Karnak, an opulent steam-powered paddleboat for the titular death(s) on the Nile. Still seeing Jacqueline as a personal threat, Linnet enlists Poirot to act as personal bodyguard and, if needed, detective.

For all the affection, some real, mostly feigned, Linnet rightly perceives her wealth, social status, and personal success as an invitation for the more jealous or envious members of her entourage to act on those feelings and vaguely contribute to her downfall or vicariously enjoy Linnet’s setbacks from a safe, if close, distance. Before long, the knives (metaphorically) come out and Poirot finds himself in full-on detective mode, investigating a tangled web of relationships, alliances, and hidden agendas.

With the approval of Christie’s estate, returning scribe Michael Green (Blade Runner 2049, Alien: Covenant, Logan) takes more than a few liberties with the source material, eliminating some characters, renaming others, and giving new and/or different roles to preexisting characters. Bouc, for one, doesn’t appear in the novel, but in Green and Branagh’s fresh, invigorating story, he plays a significant role in the unfolding plot, functioning as Poirot’s confidante, partner, and even friend. Bouc’s presence adds yet another, more human layer to Christie’s usually aloof, occasionally condescending character, a character who defines himself by an unflinching adherence to rationality and reason, not emotion or feeling.

Given Poirot’s decades-long history in various media, Branagh and Green’s decision to give Poirot a backstory that differs from Christie’s novels, adding a platonically intimate relationship (with Bouc), and hinting at the depths of Poirot’s loneliness via several, deftly handled scenes between Poirot and Salome (both middle-aged, both survivors of various relatable traumas), this Poirot, washed and waxed mustache aside, may diverge far too much for longtime fans of Christie’s character and the pre-World War II-world he inhabits. For everyone else, though, Branagh and Green’s changes to Christie’s character make Poirot not just a hero in his own mind (he is), but in the audience’s too.

Still, of course, there’s the proverbial elephant in the screening room: With the exception of a handful of scenes or background plates, Death on the Nile was shot on a London soundstage. Even at its best, the CGI is obvious in practically every scene.

That may or may not have been intentional, but at least from one perspective, it can be seen less as a failure on Branagh and his collaborators’ parts than an attempt to duplicate mid-20th-century, Hollywood filmmaking, as homage and ode to a different, maybe more innocent time, where filming on interior sets and using back- or rear-screen projection (in turn adding a kind of hyper-artificiality), was the norm, not the exception. There too, Death on the Nile succeeds.

Death on the Nile opens Friday, February 11, only in movie theaters.

Death on the Nile