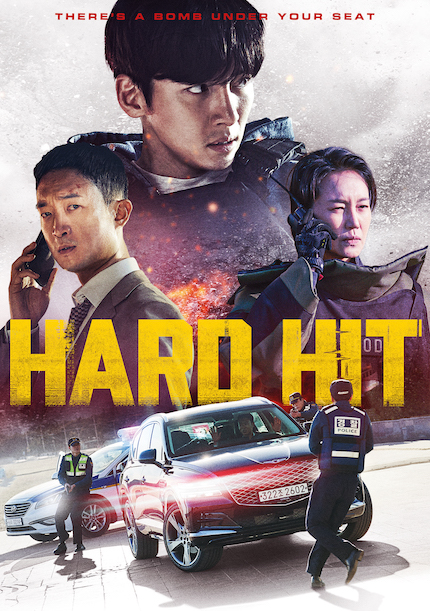 Why did you plant a bomb under my seat?

It's an ordinary weekday when highly-successful, highly-stressed bank manager Sung Gyu (Jo Woo-jin) heads off to his demanding job, with his two children in the back seat.

Intending to drop his teenage daughter and young son off at school first, he is already assaulted with phone calls from the busy day that awaits. Thus, he's in no mood for a prank telephone call from a stranger claiming that a bomb has been planted under his seat.

Until, that is, he is convinced that it is not a prank, and that he must do what he is told or else he and his children will be blown sky high.

Adapted from director Dani de la Torre's original Spanish-language thriller El desconocido (Retribution, 2015), which was written by Alberto Marini, who wrote the superb thriller Mientras Duermes (Sleep Tight, 2011), Hard Hit mostly delivers on its instantly-captivating premise, which reminds of Speed (1994), of course. Here, Sung Gyu is told that neither he nor his children may leave the car, and no one -- not the authorities, certainly -- may be told what is going on, at the threat of an instant explosion. (The caller claims to be holding a detonator for the bomb.)

Since the bank manager is told to deliver an extremely large sum of money to his caller, it's natural to assume that financial motives are involved. The caller sounds diabolically unconcerned over Sung Guy's children, insisting that the delivery of the money must take priority, even when the young boy suffers a minor wound. If it all sounds somewhat convoluted and extremely melodramatic, that's because it is, though all the complications make for an extended chase and endless pursuit that raises the temperature, even if it also stirs the pot so that it laps over the edges of credulity.

Dismissing it as a melodrama thriller only begins to tell the tale, though.

Directed by Kim Chang-Ju in his feature debut, the film reflects his vast experience as a film editor over the past 15 years or so. The shots are photographed crisply and the pace is quick. When the audience has a few moments to catch its collective breath and reflect upon the possible motivations involved, it remains a tangled puzzle until it's far too late to be swayed from one's initial impressions, frankly.

By which I mean, the ending sequence and the revelation of the mysterious compelling force that drives the entire movie failed to convince me entirely on a narrative basis, for which I admit my own culpability, due to my general ignorance and/or lack of creative thinking -- i.e. I got very confused -- yet Hard Hit, as a whole, is packed with so much action dynamite, in a juicy flavor and at a blistering pace that I love, and features almost continuous elaborate and extravagant automotive sequences, that I won't complain too loudly.

Do you feel this content is inappropriate or infringes upon your rights? Click here to report it, or see our DMCA policy.
CJ EntertainmentJo Woo-jinKim Chang-JuSouth Korea