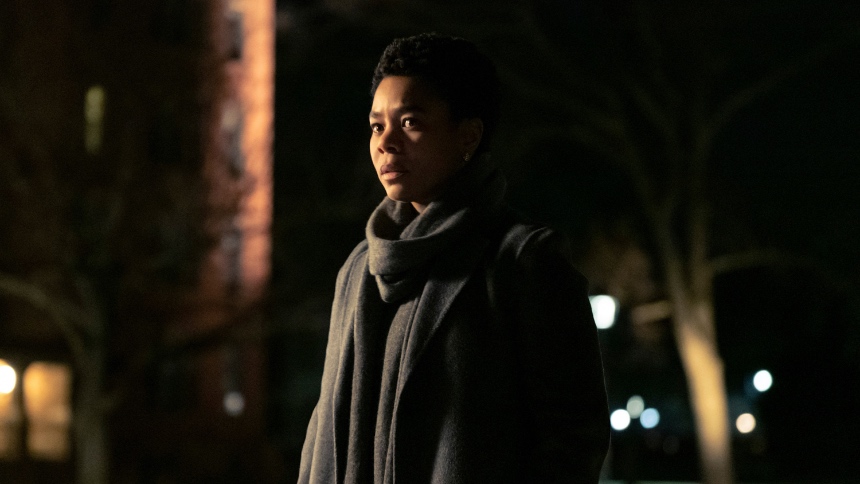 When first-year college student Mariama Diallo arrived on campus at a centuries-old Ivy League institution, she didn’t give a second’s thought to the so-called “master” (dean of students) who greeted her. By Diallo’s own admission, she developed a close, personal relationship with the senior professor, accepting the designation and her use of said designation without question or even doubt.

It wasn’t until several years later, however, that the Senegalese-American Diallo recognized the problematic nature of a Black woman calling a college professor “master.” The institution eventually did as well, eliminating the use of the title in subsequent years, but for Diallo, the title of “master” also reflected the Ivy League’s institution’s long, often suppressed or ignored history of racism and the long-term consequences of that racism on Black students, professors, and administrators.

For Gail Bishop (Regina Hall), the central character in Diallo’s feature-length debut, Master, becoming a "master" represents a once-in-a-lifetime, once-in-a-generation promotion, the culmination of a lifetime's worth of effort to obtain academic recognition. As the first Black woman (or man) to obtain the title, Bishop naturally takes pride in her achievement, an achievement earned through near Herculean efforts (publishing, specifically) and tireless networking.

Moving into the spacious mini-mansion reserved for masters also helps to crystallize Bishop’s achievement, though it’s evident from the first scene that Bishop has also sacrificed tremendously to obtain her exalted status. While she has casual friends and acquaintances on campus, Bishop can only count on a junior professor, Liv Beckman (Amber Gray), as an ally. As a junior/assistant professor, Beckman, however, doesn’t have tenure, leaving Bishop alone to navigate the internecine conflicts of the academic world.

Diallo alternates Bishop’s evolving story, including an increasingly fraught series of encounters with something possibly supernatural in her new home, a sign of racist things both to come and in the past, with that of a college freshman, Jasmine Moore (Zoe Renee). On her first day, Jasmine learns she’s been assigned a room rumored to be cursed, due, at least in part, to the death-by-suicide of the first African-American student at the university more than 50 years earlier. At least initially, Jasmine has less to worry about from ghosts or long-buried histories than her not-so-subtlety condescending roommate, Amelia (Talia Ryder), and the series of micro-aggressions Jasmine suffers from Amelia, Amelia’s friends, and the university at large.

While Bishop struggles to find her footing as the “master” of the title, Beckman comes up for tenure review, putting Bishop in an uncomfortable position against her white, virtue-signaling, liberal colleagues. Meanwhile, Jasmine’s experiences take a turn, not just for the worst, but for the horrific.

Plagued by Giallo-inspired nightmares, sleepwalking, and increasing isolation, Jasmine faces the real prospect of psychological disintegration, collapse, or worse via the university’s real and/or imaginary ghosts. Like Bishop, Jasmine exemplifies “Black Excellence,” yet finds that all of her previous academic achievements, expectations for herself, or eagerness to belong ultimately mean nothing or next to nothing.

Through Bishop and Jasmine’s interweaving, ultimately converging stories, Diallo deftly explores multiple, intersecting issues and themes related to race, class, and gender. It’s not by accident that the central characters are women, Black women who have been historically marginalized, excluded, and ostracized from academic institutions. Their experiences may be at opposite ends of academia (college freshman, college professor), but they still face the deep-set, embedded structural racism that makes academic success difficult, if not impossible, setting up barriers and obstacles that at least for some, prove to be insurmountable.

A better, more effective campus-set drama than straight-up horror, Master still manages to deliver a handful of effective scares, mostly around the disturbing, racist-tinged nightmares that beset Jasmine’s fragile, fracturing psyche. Shocks or jump scare, though, are few and far between and when they do occur, the average horror fan will see them coming long before they arrive.

An additional subplot involving the limits and parameters cultural appropriation and racial authenticity pops up now and again, culminating in a denouement that feels as rushed as it is moderately unsatisfying. Still, there’s no denying Regina Hall’s powerful, layered central performance or Zoe Renee’s grounded, sympathetic turn as Jasmine.

Master premiered on Friday, January 21, at the Sundance Film Festival.

Do you feel this content is inappropriate or infringes upon your rights? Click here to report it, or see our DMCA policy.
Amber GrayMariama DialloMasterRegina HallTalia BalsamTalia Ryder