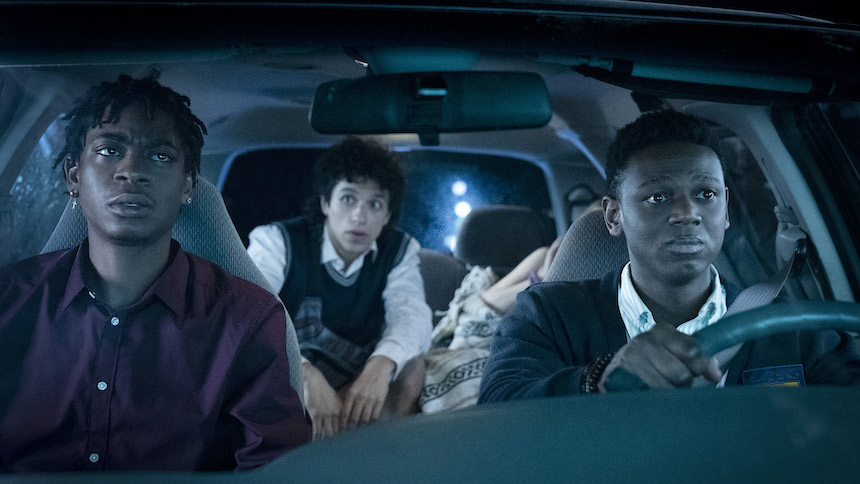 They, like the raptly engaged audience on the other side of the digital screen, immediately know what’s up. They, like we, know the real-life danger the situation poses to them and their future, responding accordingly with instant, irrefutable logic. It’s race, racism, and the threat of racialized police violence in a microcosm.

For the three college seniors at the center of Emergency -- Sean (RJ Cyler), whose brother owns the home, Kunle (Donald Elise Watkins), a straight-A student on his way to Princeton for grad school, and Carlos (Sebastian Chacon), their stoner, videogame-playing roommate -- they have no choice but to leave as well. Earlier the same, soon-to-be-chaotic night, the drunk blonde girl, Emma (Maddie Nichols), stumbled into their off-campus apartment from a nearby frat party, passing out on their living room floor and, when briefly awakened from her alcohol-fueled stupor, vomited everything, putting Sean, Kunle, and Carlos’s plan for a wild night of frat-party hopping, a “Legacy Tour” of seven parties in a single night (a record they hope to enshrine in the Black Student Union’s Hall of First), in dire jeopardy.

That’s the least of their problems, of course. While Kunle, the serious-minded, achievement-oriented son of African immigrants, strongly believes that his upper-middle-class status and his dress code (button-down shirts, plain slacks, overtly polite behavior) make him immune from racist police violence, the street-smart (and (street-raised) Sean convincingly argues otherwise. The immutable color of their skin, Sean argues, will determine how the police treat them.

Without a rational, believable explanation for Emma’s presence in their living room, calling 9-1-1 risks several responses from law enforcement and the criminal (in)justice system, none of them good (arrest, conviction, prison, or worse). Kunle, the virtual embodiment of “respectability politics,” can’t imagine a no-good, bad, terrible outcome for himself or the others. Sean and Carlos, however, can.

After much anxiety-driven deliberation, an indecisive Kunle eventually gives in to Sean and Carlos’s suggestion to transport a still-passed-out Emma to a nearby party (making her someone else’s problem), before ultimately deciding to take her to a hospital for care. Before they can, though, they have to dodge drunk, angry frat-bros, Sean’s fear-driven relatives and friends rejecting their pleas for help, and a slow-motion pursuit via bicycle and battery-powered skateboard by Emma’s suddenly concerned older sister, Maddie (Sabrina Carpenter), Maddie’s tolerant best friend, Alice (Madison Thompson), and Alice’s hook-up for the night, Rafael (Diego Abraham).

On the surface, Emergency falls into the “one wild and crazy night” comedy sub-genre. On just that level, it delivers far more hits than misses, humor wise. Williams and Dávila find humor, some of it deeply uncomfortable, in practically every situation.

In an early scene, Sean and Kunle sit through a humanities class as the British-born professor opens a discussion of hate speech by using the N-word multiple times to a stunned classroom. Dig a little deeper, though, and a smartly attuned, insightful, provocative socio-political satire of race and racism in contemporary America emerges, one where Sean and Kunle, friends and roommates thrown together by chance and college, represent two distinct positions, each one based on a combination of beliefs, experiences, and hopes (or lack thereof, in Sean’s case).

Not surprisingly, Emergency eventually takes a side in the ongoing Sean vs. Kunle argument, reflecting not just their slightly exaggerated in-film experiences, but the real world on the other side of the digital screen too. While Emergency ends on an undeniably potent moment of self-realization, a combination of a close-up and an off-screen sound, it just as importantly centers Sean, Kunle, and Carlos’s friendship and the power of friendship, if not to save them, then to sustain and maintain them through the obstacles, barriers, and costs inherent in racism.