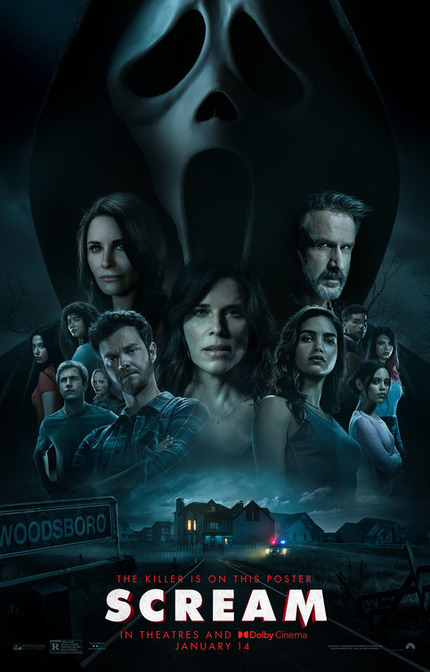 Welcome back to Woodsboro, after a lull of ten years since the events of Scream 4, the site of the original Ghostface murders once again finds its streets running red in the fifth installment of the series that changed big budget horror twenty-five years ago. Scream (2022) is the first installment to find itself in unfamiliar hands, as original writer Kevin WIlliamson and the dearly departed Wes Craven are replaced by James Vanderbilt & Guy Busick and Matt Bettinelli-Olpin & Tyler Gillett (collectively known as Radio Silence) respectively, but this new team really understands what makes Scream tick, and for better or for worse, they really deliver.

The film opens as they all do, a girl, home alone, answers a call from an unknown caller. The conversation seems trivial at first, but quickly turns sinister and she finds herself fighting for her life. That's probably the last plot detail I can really relay without getting into what most would consider spoilery territory, but that's only because it’s the trademark of the series. What happens to that girl begins the twisting and reshaping of the Scream formula by the new creative team in a way that will both surprise and sate fans of the series, a tricky balance to strike, but done with aplomb here.

The plot basics are largely the same as the earlier films (save Scream 3, which is its own kind of bizarro/bravura failure), a killer is on the loose, mostly targeting high schoolers, a group of whom must band together to find out who is behind the knife before they find it thrust through their back. This being Woodsboro, a town now famous for its darkest hour being turned into an iconic book and a tremendously successful series of slasher movies (Stab), the kids are well aware of how this is all going to go down, and it all gets very messy as audience and characters alike begin the guessing game to determine who can and who cannot be trusted.

It's not all new faces though, as the key trio of Sidney Prescott (Neve Campbell), Gale Weathers (Courtney Cox), and Dewey Riley (David Arquette) find themselves pulled back into the nightmare they hoped they'd left behind to try and help make sense of it all. In this iteration, the old school heroes are definitely not the leads, but their presence is definitely of great consequence, and not simply fan service. They are weathered, affected by their past, twenty-five years on it has shaped them into deeply suspicious and cautious people, but it has also made them strong and that strength is critical.

The young cast consists largely of TV stars, very much like first entries in the series. Sisters Sarah (Melissa Barrera) and Tara (Jenna Ortega) Carpenter, Sarah's boyfriend Richie Kirsch (Jack Quaid) twins Chad (Mason Gooding) and Mindy (Jasmin Savoy Brown) Meeks-Martin, and goofy spooky girl Amber Freeman (Mikey Madison) do most of the heavy lifting, each deftly taking on the attributes of Scream's original crew. It's fairly easy to draw direct lines between our new crew and the old heads, but it still works thanks for well-tuned performances and clever writing.

Fans looking for that meta-magic that these films have become so famous for are in luck, there is no shortage of callbacks to previous Scream films, acknowledgement of current trends in horror, and "legacy" characters getting their moments to shine, not to mention an Easter Egg or two for those hardcore Scream geeks. Horror fans pretty much know what they're going to get with this film, and if you're a fan of horror movie minutiae or enjoying jumping at whatever Film Twitter/Horror Twitter debate is currently raging on the Internets, you'll definitely enjoy some of the film's digs at fandom and even the snootiness of "elevated horror". If you don't enjoy that sort of thing, you're probably not going to see a new Scream movie anyway.

Without Craven and Williamson in the mix this time, it is up to Betinelli-Olpin & Gillet to deliver a satisfying experience to what has become a very fickle fanbase, and they do that job well. There is no attempt to re-invent the wheel here, but after tepid responses to the last two entries, this Scream definitely delivers on every level that a fan would expect, dare I say even improving in a few key areas.

This latest Scream is far and away the most brutal of the series, with kills you can feel. While the recent Halloween films have also had some of that series most violent kills, they were largely unaffecting, staged purely for spectacle without any significant emotional weight. However, our latest Ghostface wants the audience to feel every last inch of the knife, and do we ever. There are no quick kills here, each victim is someone we care for, someone that we want to make it to the end, and when they go, it’s ugly, like murder should be. I don’t know that Craven would’ve made kills this graphic, but in the current horror context, the violence here is exquisite.

Radio Silence go to great pains to not necessarily ape Craven’s style, however, Scream is still recognizable as a descendant of a proud tradition. The film feels like both an ending and a beginning, signaling to fans that though some things may pass, in this case they’ve been passed into capable hands. Where the series has taken on slasher film homogeneity, sequel-itis, social media obsession, and internet virality in the past; it’s made clear here that the well of topics to satirize (elevated horror, toxic fandom, etc.) is far from dry, and as long as there are teenagers who think they know everything, there will always be fodder for a new Scream. This film nails it, Scream is a worthy follow-up, and the best film in the series since the ‘90s.