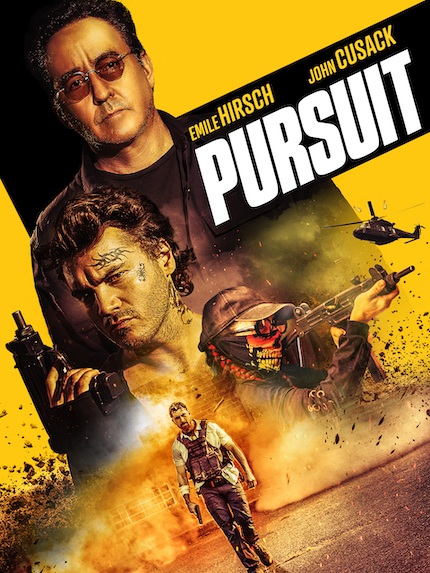 Here are two questions I have never asked myself: (1) "Where is my wife?" (2) "Did my father have something to do with her disappearance?"

When you are Emile Hirsch and your father is John Cusack, though, and you find yourself in a new trailer for a movie called Pursuit, those questions become entirely relevant. Jake Manley, Elizabeth Ludlow and William Katt also star; Brian Skiba directed.

Per the official verbiage: "John Cusack (Grosse Pointe Blank) and Emile Hirsch (Into the Wild) star in this action thriller about a tough cop's hunt for an even tougher criminal.

"Detective Breslin crosses paths with Calloway (Hirsch), a ruthless hacker desperate to find his wife, who has been kidnapped by a drug cartel. When Calloway escapes police custody, Breslin joins forces with a no-nonsense female cop to reclaim his prisoner. But is Calloway's crime-boss father (Cusack) somehow involved in this explosive situation?"

I note that the running time is 92 minutes, which is usually a good indicator for this type of indie action movie, which appears to favor bullets flying and things blowing up. Have a look at the trailer below. Pursuit will be available in select theaters and On Demand on February 18 from Lionsgate.

Do you feel this content is inappropriate or infringes upon your rights? Click here to report it, or see our DMCA policy.
Brian SkibaEmile HirschJake ManleyJohn CusackLionsgateWilliam Katt