Review: THE SHRINK NEXT DOOR, With Friends Like These

Will Ferrell and Paul Rudd star in a new series that straddles the line between comedy and drama, soon to begin streaming on Apple TV+. 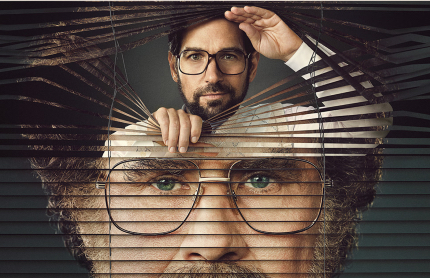 The Shrink Next Door
The eight-episode series will premiere on the Apple TV+ streaming service with its first three episodes on Friday, November 12, followed by one new episode weekly, every Friday.

A reliable pair of actors, Will Ferrell and Paul Rudd play to their strengths in the first episode of The Shrink Next Door, directed by Michael Showalter.

Ferrell plays Marty Markowitz, who is stressed out severely by his new responsibilities as the inheritor of his late father's successful carpet business in Manhattan, New York, to the point that his sister Phyllis (Kathryn Hahn), who plays an integral role in running the business, urges him to see a psychiatrist. Finally acquiescing, Ferrell warily plants himself in a seat in front of said psychiatrist, calling himself Dr. Ike (Paul Rudd), who briskly pulls Marty to his feet, helps him confront his demanding ex-girlfriend, and inserts himself into Marty's life.

The first episode begins in the 2000s before rewinding to the 1980s, where much of the action takes place; clear signals are communicated throughout that things will not end well for the burgeoning friendship between a psychiatrist and his patient. The fun, the joy, the insight, and the emotional pain is what is developed throughout the series, accompanied by the warning signs that are continually sounded.

Functioning as a 'pilot episode,' to borrow a term from more traditional network television, the 35-minute first episode briskly and efficiently does its job: the main characters are introduced, the premise and setting are established, as well as a 'hook' to encourage further viewing to see how it all plays out. The second and third episodes, running longer, build further on that foundation, revealing effective dramatic elements that are woven into the comic fiber that is the show's greatest strength.

Over the years, Ferrell has demonstrated his ability to suggest rather than show every emotion that his character is feeling; here he plunges further into suggesting some of the deep well of emotions that his character is experiencing, through his body language and his gestures. He still excels at physical comedy, but in this series he tamps that down without losing any of his convincing ability to play the fool, a fool who slowly, slowly, slowly wises up.

As his foil, Rudd bounces along on his likable charisma; it's easy to imagine him as someone who is doing just fine, but always wants to do better, to be more successful, which in his character's mind is defined by the parameters of mini-celebrityhood and material prosperity that can be seen and envied, perhaps, by others.

In the early episodes, Kathryn Hahn is a marvelous counterpoint to both Ferrell and Rudd, while in later episodes Casey Wilson's performance as Bonnie, Dr. Ike's loving and supporting wife, bolsters everything. Other supporting players, including Sarayu Blue as Miriam, effectively convey the view of outsiders to the increasingly puzzling bond between Marty and Dr. Ike.

Based on a 2019 podcast by Joe Nocerra, which in turn was inspired by a true story, the series was developed by Georgia Pritchett, whose recent credits include Veep, Run and Succession. Framing the series as an exploration of how the characters come together, and then somehow stick together in a seemingly unbreakable co-dependent bond, allows Ferrell and Rudd to display more fully their ability to flesh out their characters and capture multiple dimensions that are compelling.

Sometimes you can be drawn to people without truly understanding what it is that draws you to them. By the time you figure it out, it's very, very difficult to break that bond. Besides, why would you want to break it off: the other person is so blasted nice!!!

The Shrink Next Door captures these feelings exactly throughout the course of its eight episodes. Some days, it takes forever for the sun to rise, and for the dawn of realization to break through.

The Shrink Next Door