Andy Lau and Sean Lau (Lau Ching Wan) star in an action thriller from Hong Kong, directed by Herman Yau, that snaps, crackles and pops from its first moments. 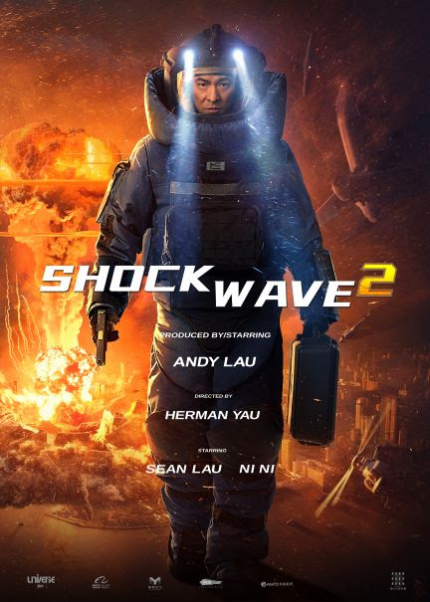 A sequel that requires no knowledge of its predecessor.

Shock Wave 2
The film is available on demand as of Tuesday, November 2, 2021, on Xfinity, Spectrum, Cox, and other cable systems, as well as DirecTV, Dish Network, AT&T U-Verse, and Sling TV.

From its opening moments, director Herman Yau's thriller snaps, crackles, and pops, immediately dialing the temperature up to the boiling point and beyond.

After that, the film occasionally slows down, but never stops simmering entirely; the heat is always on, bubbling up tension, dramatic and otherwise. Andy Lau, who also served as a producer, looks and acts like a prisoner tied into a straitjacket and set on fire.

As established in Shock Wave (2017), Poon Shing Fung (Andy Lau) is an explosives expert with the Hong Kong police, which means that he spends 24 hours per day defusing bombs. The city has gone absolutely bomb-mad, for some unexplained reason, but nobody knows why and, frankly, nobody cares, because all that matters is that bombs are threatening to go off every day.

Thus, Poon Shing Fung and his squad, notably his best mate Tung Cheuk Man (Sean Lau, aka Lau Ching Wan), spend every day defusing bombs, until one fateful night, they miss one, and it explodes, costing Poon his leg. Undeterred, Poon spends months in rehabilitation and is determined to return to active duty, but his bosses aren't having it, so Poon isn't having them -- it's either active duty or he'll quit.

This is Andy Lau we're talking about, so of course he quits when the big-shots refuse to even give him a chance, despite all the exercises he's been doing. (The visual effects look nifty here as Andy jumps and leaps and moves with the 'artificial' limb.)

Meanwhile, Tung rises in the department, and Poon's girlfriend, Pong Ling (Ni Ni) does too. (As more than an aside, Poon dumps her when he is dumped by his police superiors). Five years later, a new reign of terror begins, and it looks like Poon has gone over to the Dark Side; he's held responsible for a bombing that leaves many people dead, and it looks like he is now affiliated with a terrorist group that has come to town and wants to destroy Hong Kong.

(Fill in your own descriptions of which characters are stand-ins for Mainland China.)

Director Herman Yau, who collaborated on the screenplay with Erica Lee and Eric Lee, has become quite the respectable mainstream filmmaker, but he's is happily aware of his roots as the person responsible for Taxi Hunter, Ebola Syndrome, and all those Troublesome Night movies. He's a good filmmaker, no matter the subject; From the Queen to the Chief Executive (2001), for example, remains a great picture, and it didn't even have any zombies or terrorists.

In Shock Wave 2, Herman Yau ratchets up the pace and allows the pot to boil over, multiple times, with action goodness, artfully conceived and masterfully executed. Andy Lau is suitably frenzied; he looks great and he's actively angry much of the time, which I think always enhances his performances. (I mean, he can be mellow and melancholy, too, but Angry Andy Lau is a sight to behold.)

Wrapping up, the movie is ridiculously entertaining, providing a jolting shock to whatever wave you happen to be riding.