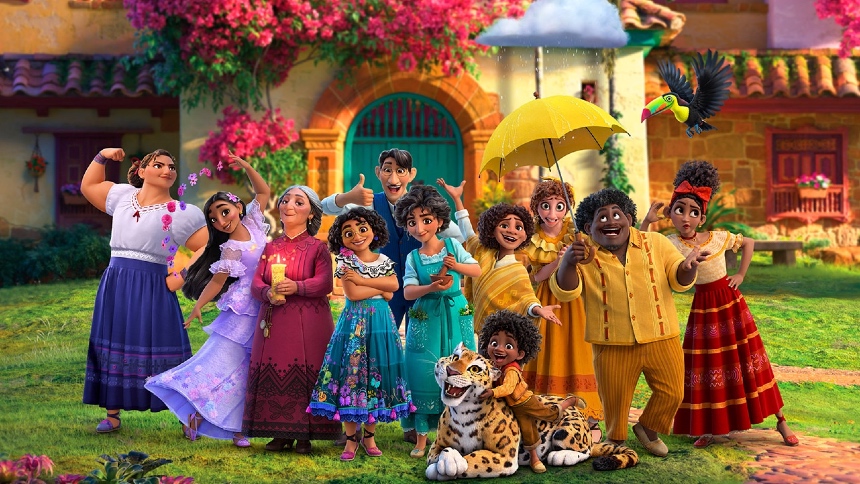 Finding your own place in any family can be challenging.

Born into a large family whose members are all empowered with magical abilities, Mirabel (Stephanie Beatriz) feels lonely and left out, at best, and downright deprived and isolated, at worst.

Living in a small village called an Encanto that is hidden from the world, thanks to a magical candle that has bestowed magical abilities upon each member of the extended Madrigal family for many years -- even their house is endowed with magic! -- Mirabel has good reason for her feelings. Oh, she endeavors to be as bright and as cheerful as every other member of her family, who are all superpowered, in effect, and held in worshipful high esteem by the other members of the community.

Mirabel, however, did not receive a magical ability when she came of age, for no reason that anyone can discern, and thus is unlike everyone else in her family. She is relegated to a subservient role and held in little regard by everyone; she must consistently fight abject feelings of despair that threaten to overwhelm her, without anyone's help or understanding. At best, she is offered expressions of unspoken pity.

Things come to a head on the day that a younger relative faces his day of magical reckoning. Mirabel soon comes to the strong suspicion that something is very, very wrong in her world; the magic might be going away, even though that seems unthinkable to everyone.

Could she, an ordinary young woman with no special powers, finally become useful and special, somehow, in some way? On this thin sliver of hope, she decides to take action.

Jared Bush and Charise Castro Smith wrote the screenplay, from a story credited to Byron Howard, Jason Hand, Nancy Kruse and Lin-Manuel Miranda, and have cobbled together a story touching on classic themes, yet from a fresh perspective that reflects the film's setting in the mountains of Colombia, South America, especially in regards to Latinx families.

Abuela Alma (María Cecilia Botero) is the unquestioned maternal head of the family; when she speaks, her family listens, obeying her every word. This rings true to me, as does her stubborn insistence on defending her family, no matter the cost. Her strong and protective maternal instincts are endearing rather than off-putting.

The size of the family, perhaps, is what has inspired the filmmakers to give multiple members their own songs, written by Lin-Manuel Miranda; though these songs are wonderfully animated and somewhat amusing, they are somewhat besides the point, and contributes to the flabbiness of the film's narrative, which tends to dawdle for no good reason.

It's almost as though the filmmakers fell too much in love with their own stories and characters, leaving too much fat, slowing the momentum that's needed, and thus lessening the cumulative impact. Though I admire the intent to broaden the role of protagonist to encompass the entire family, rather than an individual viewpoint, in practice it becomes unwieldy. The film never quite settles into a pleasing, focused rhythm.

To be clear, I enjoyed Encanto very much. I love that Stephanie Beatriz has a fitting, wonderful showcase for her dramatic and comic talents in the lead role. I admire that it tells a story that varies from a traditional 'hero's journey.'

Yet I can't help wishing that Encanto had managed to achieve all its goals and deliver a completely satisfying adventure. It comes close, but it's like a six-cylinder engine with only four, sometimes five cylinders that are firing consistently.