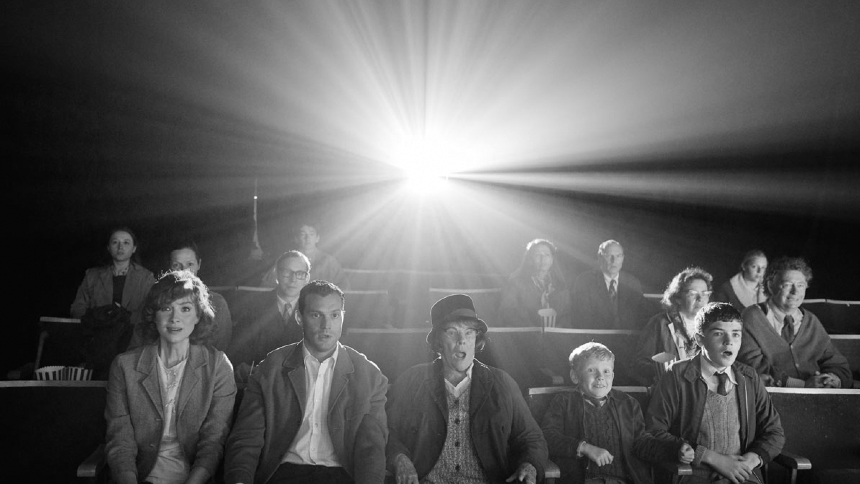 In any other context, it would be an ordinary, even forgettable afternoon, but filtered through Branagh’s poignantly nostalgic lens, it’s also a brief respite, a temporary escape from the slings and arrows, if not of outrageous fortune, then of the so-called “Troubles” that wracked Northern Island from the late 1960s through the late 1990s when the Good Friday Settlement ended the internecine conflict between Catholic Republicans and Protestant Unionists.

There’s a key character, Buddy’s grandfather, Pop (Ciarán Hinds), missing from that scene in the movie theater. Conspicuous by his absence due to a debilitating, long-term illness that's left him hospitalized, Pop can’t attend the screening, but to one and all, especially Buddy and Buddy’s unnamed father, he’s mentor, friend, and counselor, gently guiding son and grandson through a life journey before, like everything with a biological origin, his time will come to an end.

It’s in those quiet, intimate, often spoken in a whisper scenes where Belfast truly shines as a richly rewarding, relatable coming-of-age tale. While unsurprisingly filled with nostalgia, those scenes are also filled with Branagh’s gentle, mostly uncritical affection for his father and grandfather.

Branagh, however, doesn’t ignore or downplay the women central to Buddy’s young life, though they, like everyone else in Belfast’s immediate vicinity, are defined primarily by their relationship to Buddy. On balance, Buddy’s mother gets more screen-time than his father, mostly because Buddy’s father, a plumber and joiner, spends most of his waking life not in Belfast or even Northern Ireland, but in an impossibly far away England where he can make a somewhat dependable living.

Even then, though, Buddy’s father's neglect of the family’s finances puts a strain on his relationship with Buddy’s mother, a long-simmering conflict we see both through Buddy’s eyes as a passive observer and, on occasion, without Buddy’s presence at all. It’s left to Buddy’s mother to hold the slowly fracturing family together, often functioning as a single parent while Buddy’s father works across the water.

Financial problems or working abroad aren’t the only problems Branagh slowly teases out across Belfast’s episodic, impressionistic 98-minute running time. The Troubles loom both large and small in Buddy and his family’s life, explosively intruding during Buddy’s playtime in the over-directed opening scene (Buddy’s playing at war with age-appropriate friends while a significant number of adults are eager to participate in a real one) as a demonstration turns deliberately violent, putting the lives of their Catholic neighbors at risk and as one petty thug-turned-Unionist-supporter ominously demands, “Cash or commitment,” to the Protestants, including Buddy and his family, who live in the same neighborhood.

Belfast practically soars in those small, intimate family moments, yet it also stumbles, sometimes badly, whenever the Troubles come back into soft focus. Branagh made a conscious, populist decision to emphasize the universal aspects of Buddy and his family’s life while also just as deliberately de-emphasizing the politics surrounding the Troubles, repeatedly pointing to the pre-Troubles period in Buddy’s life as an idyllic, almost perfect one.

That’s far from the historical truth, of course, but given that Belfast hinges on the potentially life-altering decision of whether Buddy and his family should stay in Northern Ireland or leave for a potentially conflict-free England, it’s a decision that feels like it's missing the courage necessary to truly interrogate the time period and how and why it affected the course of Buddy’s (and by extension, Branagh’s) immediate family.

Unsurprisingly, though, Branagh elicits naturalistic, grounded performances from a cast filled with long-time thespians (Dench, Hinds), mid-career artists (Balfe, Dornan), and preteen or teen actors (Hill, McAskie). Centering a film on a child and his or her coming-of-age always comes with significant risk, specifically that a poor or uneven performance can make everything around it, whatever their merits, flounder and eventually sink.

As the central character, Buddy, Hill meets the challenge and then some, delivering a finely crafted performance that could have come only through the patient coaching and guidance of a director like Branagh, steeped in the subtleties and nuances of acting.

Belfast opens in Canada and U.S. theaters today (Friday, November 12). Visit the official site for locations, ticketing and other information.