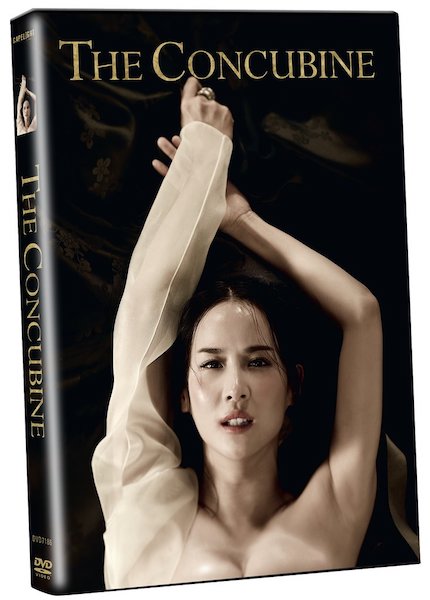 Directed by Dae-seung Kim (Blood Rain, The Servant), The Concubine is a South Korean period drama that shows us how rigid the Royal Court was in that country, or how it’s imagined, of course. The Court was as strict, brutal, and corrupt as any other in history, give or take a few murders.

The film stars Yeo-Jeong Cho (Parasite, The Servant) as Hwa-Yeon (she’s listed as Yeo-Jeong Jo here), a woman forced into various circumstances by the men around her. (When are women not?)

Specifically, the story takes place during the Joseon Dynasty, a Korean kingdom that lasted for approximately five centuries. We first meet Hwa-Yeon, the daughter of a noble family, with Kwon Yoo (Kim Min Joon, listed here as Kwon-Yoo (as Min-jun Kim) as the Prince (Dong-Wook Kim) spies on them. In love, Hwa-Yeon and Kwon-Yoo run away, but they’re discovered living in a shack in the woods. Not allowed to be together, he’s emasculated in a horrific and literal way as she’s torn from him. Brutal.

Time goes by, and Hwa-Yeon is in the Royal Palace. She becomes Queen to a King who’s not onscreen much before he dies by poison. She’s allowed to stay in the palace, but isn’t allowed true freedom. The real power is wielded like a sword by the Queen Mother, who’s younger son now assumes the throne. This prince becomes the King, but it takes a while before he learns to stand up to his mother.

In the meantime, Hwa-Yeon’s former lover Kwon Yoo is installed in the same palace as a eunuch advisor. He gets promoted by the King to become “senior eunuch” after they become slightly friendly, which is kind of amazing, because you’d think he’d remember spying on him with the object of his affection then and in the present, Hwa-Yeon. Or maybe he wants to keep prospective enemies close, but I don’t recall that decision being made clear.

Confusion does factor into the experience in watching The Concubine, and some time jumps  don’t help that. The tone varies, and at first, if you’d walked into the room while I’d just turned on the film, I wouldn’t chastise you for thinking this was a TV drama produced closer to the turn of this century. I don’t know if there was a change of above-the-line talent, but something happened.

Anyway, palace intrigue shifts as loyalties and motives do, resembling a Shakespearean melodrama. I don’t want to ruin this 2012 film for anyone, but I think it’d suffice if I reported that there’s an incredible amount of backstabbing, along with some sex and torture. There's a LOT going on, and it can be difficult to follow at times.

However, the ending is satisfying to me and probably is to many women, but not all viewers may have that experience.

Let’s talk about this DVD package. First off, the salacious image of the actress on The Concubine’s DVD cover isn’t quite indicative of the film inside the package; but it will sell discs, especially as audiences gobbled up the excellent, recent Parasite, also with Yeo-Jeong Cho. Originally released in 2012, this 2021 release from MPI Home Video comes in both a bare-bones DVD (the version I received) and a more sophisticated DVD/Blu-ray combo.

While I can’t speak to the qualities of the Blu-ray, I will say that I was a little concerned that watching the DVD on my 4K player (as I no longer have a basic DVD player) would annihilate the resolution, but my worries were unfounded. The picture looked terrific for the most part, with crisp, beautiful images from a gorgeous transfer. The sound was also excellent across the board.

I understand that cobbling together interviews and special features for a film nearly a decade old isn’t easy, but why not? There’s just a trailer, that’s it.

I imagine that there could be a ton to be said about that period in history, and I’d have loved to have learned more about it, specifically from the costume designer, production designer, and art director. All of these elements are done so well, and you can see the talent emblazoned across the screen to that effect. An interview with a film historian well-versed in South Korean cinema would also have been amazing. But time is money, and there’s not often much of either to go around when it comes to home “video” distribution these days, I get it.

In short, The Concubine is an interesting, somewhat-flawed period melodrama. You can find it wherever you buy DVDs.

Do you feel this content is inappropriate or infringes upon your rights? Click here to report it, or see our DMCA policy.
Dae-seung KimKim Min JoonMPI Home VideoSouth Korean filmThe ConcubineYeo-Jeong Cho