Now Streaming: THE LONG CALL, Murder By the Sea 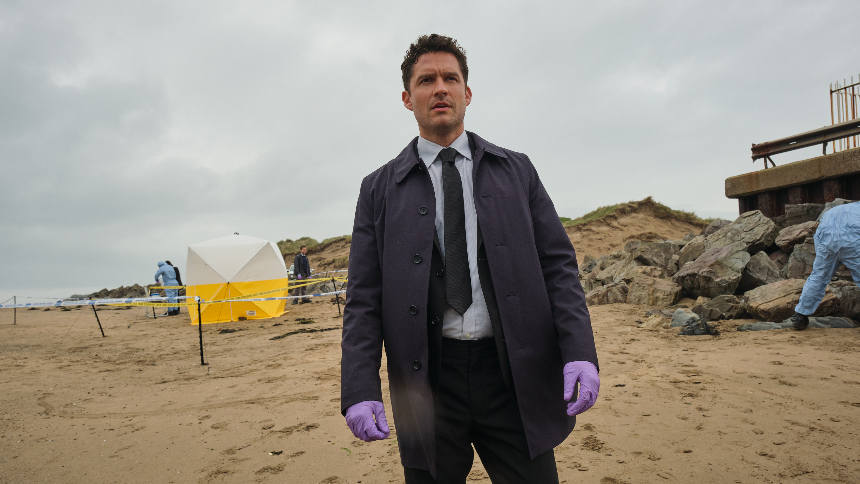 Living in a big city in the heart of Texas, sometimes I stare out my big window and dream about moving to some place, any place, where people are scarce, beautiful landscapes are abundant, and motor vehicles are not constantly making themselves heard.

After watching The Long Call, I'm not so sure.

The series is inspired by the same-titled novel by Ann Cleeves, first published in 2019. (Cleeves' past crime novels have inspired the series Vera and Shetland.) The crime writer grew up in North Devon, a coastal area in South West England known as the Two Regions region, and that's where her novel is set.

The series follows Detective Matthew Venn (Ben Aldridge, Fleabag) as he investigates a murder. He has returned to the region, where he grew up in a strict evangelical community, in the company of his partner. They have a beautiful new home overlooking the sea, which provides a serene counterpoint to the ugliness of the crime that he is investigating, in which a body was found on the beach, stabbed to death.

The area is sparsely populated, which means nearly everyone is a suspect, and definitely everyone is on guard. Simultaneously, Detective Venn is processing the recent death of his father, with whom he had a fractured relationship, as well as the presence of his mother, who has remained in the evangelical community and strongly disapproves of his loving relationship with his partner, which means a distant relationship that is strained, at best.

As portrayed by Ben Aldrich, Detective Venn makes for a strong lead; he's a quiet sort of chap who is not given to shouting, or even speaking loudly, but he has a commanding presence nonetheless. Aldrich communicates his authority in his body language and his manner of speech, rarely leaving any room for questioning or disagreement. His deeply-felt emotions of rejection and resentment have been simmering for a long time, so he is continually restraining himself, fighting his inclination to let his anger bubble to the surface and explode

The supporting cast is up to his level of performance. The townsfolk are wary of the evangelical community, but have been living under an unspoken 'don't bother us and we won't bother you' sort of detente, which is threatened by Detective Venn's investigation, especially as he learns the unvarnished reality that was kept hidden from him as a young person.

Among the more sympathetic locals, Sarah Gordy, an actress with Down Syndrome, embodies her character Lucy with a kind heart and a steely intelligence. Among Detective Venn's fellow police officers, DC Jen Rafferty (Pearl Mackie) bristles fiercely, a person of color who asserts herself adroitly as she naviages her subordinate position, as well as caring for her maternal responsibilities toward her growing children.

The first episode leans heavily on a deliberate pace that encourages the viewer to walk rather than run. Maybe it's like those signs that say, 'Slow down, stop and smell the roses,' or something like that. And it's easy to be distracted by the scenery, since North Devon itself has the advantage of looking incredibly gorgeous and autumnal.

As the series continues, though, it becomes ever more gripping. The newspapers in the fireplace eventually catch fire and begin burning, as it were, and the fire burns brighter as progressively larger cords of wood -- in the person of suspects whose motives are slowly exposed -- gets tossed into the growing fire and smoke clouds get bigger too.

When the smoke clears away, the crime and its perpetrator(s) are exposed. Nothing will ever be the same for the good people who live in the Two Rivers region.

Do you feel this content is inappropriate or infringes upon your rights? Click here to report it, or see our DMCA policy.
Ann CleevesBen AldridgeBritBoxUKIona AndersonGrant CrookesCrimeDrama

More about The Long Call