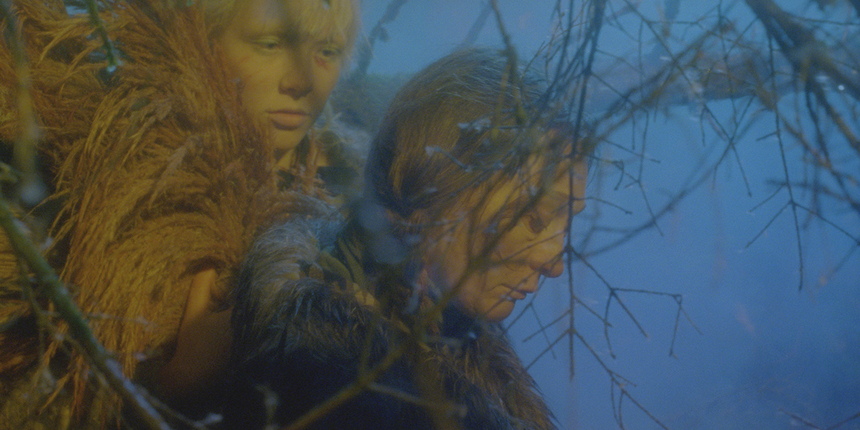 Paradis Sale, the original french title of Bertrand Mandico's sophomore feature, translates as 'Dirty Paradise'. And this place isn't exactly a paradise, nor is it dirty. But it is most definitely strange and surreal, filled with intoxication and eroticism, and highly dangerous. After his first feature about wild boys, it seems Mandico (a prolific filmmaker of shorts) wanted to take a proverbial (and literal) walk on the wild side with women.

Humans have long since left the earth, finding a new planet to colonize, which they name 'After Blue'. But the planet, it turns out, is hostile to men, and only women (or those with ovaries) survive. The species is maintained through artificial insemination, but society itself has become both beautiful and at times cruel, a place where witches hold political power, and hair starts growing as if in lament for the lost men.

Roxie, also known as 'Toxic', (Paula-Luna Breitenfelder), is a pretty and strange young girl; one afternoon, while being bullied by her 'friends', they come across a living head in the desert wastelands. The head (and body on which it resides) belong to Kate Bush (Agata Buzek, and yes, named after the famed musicican), a serial killer left to die for her crimes. But Roxie is almost instanslty enamoured, despite Kate's rotting appearance, and digs her up. The killer screams in delight, murders Roxie's friends, and almost seduces the girl before running off. Now, Roxie and her mother Zora (Elina Löwensohn) are forced to track down and assasinate the killer.

Zora and Roxie's world may have been strange, but they were at least at the centre of their civilzation, surrounded by the council of maginificant witches, with a community to go to for help or solace. Now they are in the wilds. But these are not barren wilds, far from it; this is a world of strange hills teeming with (presumably magic) mushrooms, creatures adapted for sexual pleasuring, backwoods folks too long separated from conversation that their languages do not match; and the knowledge that at any moment, Bush can find them and kill them before they kill her.

Mandico gives us a trippy, sensual, frightening world, in which everything from plant to animal is either beautiful or will kill you, or often both. Just because this is a woman-only society, doesn't mean their isn't violence; but it doesn't mean there is only violence, either. Zora and Roxie's journey is not lonely, but at times it is lonesome, as mother and daughter's connection is tested. This is a world where guns are manufactured under designer labels like Gucci and Chanel; where survival is attainable in the natural resources, and therefore, it is the community they create that makes the society.

There might be (understandable) comparisons to a lot of 70s trippy surrealist cinema, especially the work of Alejandro Jodorowsky; which is a compliment, of course, but Mandico is creating a world of his own, supringsingly astute to what a world of women might look like: certain ideas, certain ways of living, a vision of society that might be a lot emotionally healthier than what we have now; but human nature is human nature. The heart wants, the body definitely wants, and the threat of violence might be less, but it still exists. Danger and blood and desire, and the state of pleasure is always just a finger-beckon away on this planet.

After Blue comes on like a slow-burning fever, with a meditative abstraction that is likely to test some people's patience, and yet there are rewards for those who succomb to its dream-nightmare that sits at the edge of waking.

Do you feel this content is inappropriate or infringes upon your rights? Click here to report it, or see our DMCA policy.
After BlueAgata BuzekBertrand MandicoElina LöwensohnFestival du Nouveau Cinema 2021Paula LunaVimala Pons