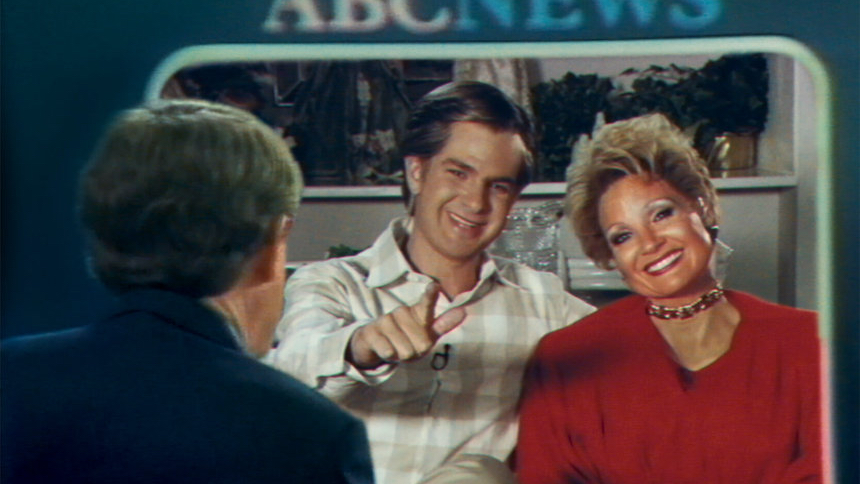 To her followers (“partners” in her preferred parlance), Tammy Faye Bakker was the Queen of Christian Televangelism, a compassionate, congenial face living her life’s dream and religious vocation: sharing the so-called “prosperity gospel” that placed — and continues to place — spiritual value on material wealth.

To her critics, Tammy Faye was something else altogether: the Queen of Christian Kitsch, a conservative grifter covered in brightly-colored clothing and raccoon-eyed makeup.

According to director Michael Showalter (The Lovebirds, The Big Sick, Wet Hot American Summer), the truth behind the public persona of Tammy Faye Bakker lies somewhere in between, sometimes closer to one extreme than another, but truth, his truth and the truth in producer-actor-star Jessica Chastain’s performance (here delivering an attention-grabbing, multi-faceted performance as the title character) nonetheless.

Working from an often reductive, simplistic screenplay written by Abe Sylvia (Dead to Me, Nurse Jackie) and drawn from Fenton Bailey and Randy Barbato’s 2000 documentary of the same title, Showalter centers Tammy Faye’s overriding, ultimately unquenchable compulsion for attention and approval, mostly, it seems from her unloving mother, Rachel (Cherry Jones), on the inflexible, patriarchal attitudes of 1950s America (Minnesota, to be exact) that put a young Tammy Faye (Chandler Head) literally on the outside looking in as her mother and step-father, Fred Grover (Fredric Lehne), participate in local church activities. Chastised by her mother and shunned by other parishioners, Tammy Faye prays for deliverance from the silent god she believes hovers over her bed at night.

That god — real or not, delusion or not — answers Tammy Faye, directing her first to the church, where she falls to the ground, speaking in tongues (attention achievement unlocked) and almost a decade later, a small bible college where she meets and becomes instantly besotted by her future husband, Jim Bakker (Andrew Garfield), as he preaches a crude form of the prosperity gospel to other students and a not quite approving pastor.

Like Tammy Faye, Jim has convinced himself that he’s destined for great things in the Christian world. He, like Tammy Faye, has the kind of self-belief, authentically derived or not, that gives him the inner strength to persevere through multiple setbacks, including the repossession of their shiny new car due to Jim’s deliberate or non-deliberate carelessness. Tammy Faye, of course, sides with the explanation that places Jim in the best possible light.

Self-delusion factors in significantly in Showalter and Chastain’s depiction of Tammy Faye. For their iteration of Tammy Faye, she’s as much victim as perpetrator, allowing her unqualified, unconditional love of her husband. It’s easy at first, especially after a chance meeting outside a motel leads them to a meeting with Pat Robertson (Gabriel Olds), a prominent evangelical leader at the time, and his small, but always growing, television empire centered around the “The 700 Club.”

With Tammy Faye as co-presenter, singer, and puppeteer — she instinctively understands that gaining viewership and followers begins with children — Jim rises to the equivalent of a Christian-oriented talk-show host. Seeing the risk to his own power and status, however, Robertson engineers the Bakers removal.

Robertson’s power move only accelerated the Bakkers' ascension to televangelical royalty as the co-hosts of their own show, “The PTL (Praise the Lord) Hour,” and their own Christian broadcasting network. In Showalter’s depiction, Tammy Faye fully embraced all of the material and social perks of her position, living lavishly in a waterfront mansion from the contributions of their partners, while ignoring Jim’s financial improprieties. Moments of self- and other awareness, of Jim’s greed, ambition, and hubris, don’t last long, not when Tammy Faye’s own non-material needs for attention, approval, and love are constantly being fed through her status as televangelical royalty.

The Eyes of Tammy Faye follows a familiar rise, fall, and redemption narrative typical of Hollywood-made biopics. It’s there that The Eyes of Tammy Faye stumbles, becoming increasingly episodic and hitting common tropes and conventions. In the second half, Tammy Faye’s marriage to Jim frays and she becomes addicted to prescription pills, eventually pushing Tammy Faye into a measure of self-reflection and self-awareness that only rings true when Tammy Faye, at least embracing part of the Christian message, steps out on a virtual limb by calling for love and compassion of AIDS victims and, specifically, gay men.

It’s practically revolutionary, especially given the longtime, long-term homophobia embedded in Christian evangelism (some things, it seems, never change), though it’s difficult not to sense Showalter and Chastain focusing on Tammy Faye’s pro-LGBTQ stance as a defense or deflection for the financial improprieties that eventually sank the PTL Club and sent Jim to federal prison after intense media interest and a public trial. Having both unfold near simultaneously helps to absolve Tammy Faye of any complicity in the massive fraud that brought down Jim.

Oddly, Tammy Faye’s second husband, Roe Messner (Sam Jaeger), appears in in the second half, first as an easy mark for Jim’s investment pitch that Tammy Faye saves with a turn of phrase, but but primarily as an adoring, smiling background character mesmerized by Tammy Faye’s bigger-than-life personality and her blunt outspokenness. Jumping ahead in time repeatedly, Showalter all but skips Tammy Faye’s decade-long battle with cancer, Messner’s imprisonment on charges of fraud and conspiracy, or her last days.

Instead, Showalter chooses to end on an admittedly upbeat, if ultimately false note: Tammy Faye’s return to performing in front of Christian crowds after a decade in the metaphorical and literal wilderness. It’s undoubtedly a touching, poignant moment, one meant to move audiences on the other side of the screen and Academy members looking to fill out their nomination cards in a few months time. It might just work. Whether it’s deserved or not, however, will likely remain the subject of heated debate for the next five or six months.

The Eyes of Tammy Faye