Jackson Rathbone and Andrea Londo star in an affecting fantasy-drama, directed and written by Hugh Schulze, and now on DVD. 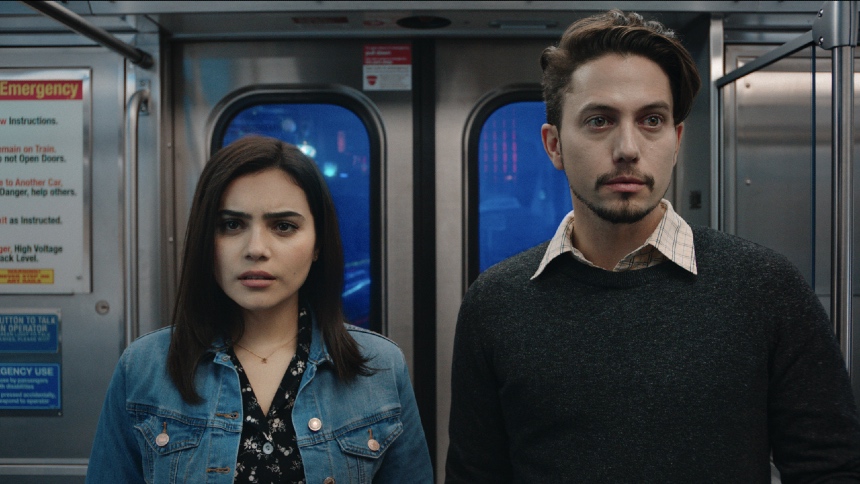 Chicago, the land of dreamers.

Dreaming Grand Avenue
The film is now available on DVD, via Music Box Films. It is also available via various VOD platforms, including Music Box Direct.

Where do dreams end and reality begins?

Sitting comfortably astride dreams and reality, Hugh Schulze's Dreaming Grand Avenue follows two young adults, Jimmy (Jackson Rathbone) and Maggie (Andrea Londo), as they cope with tragedies from their past, which define their dreams, which, in turn, inform their daytime experiences, and cause them to wonder about their futures.

Jimmy and Maggie have met in their dreams, though not in their reality. That makes any possible relationship well-nigh impossible, though it also points to what they hold in common and, of course, suggests that they will somehow, someway, find a way to meet and get together by the end of the movie.

Not so fast, says writer and director Hugh Schulze, who gives each of them obstacles to overcome that reveal aspects of their personalities that they may not yet have recognized in themselves. Mostly, what they hold in common is their determination to press forward, fighting through sad memories, while maintaining positive demeanors despite it all. They also must constantly navigate the tricky territory between dreams and reality.

It helps that both Rathbone and Londo are playing likable people, portrayed in an empathetic light by both actors, who avoid overdramatizing their roles. They are quiet people in a quiet world, even though they both live in Chicago, a big city that is not usually appreciated for its quieter places.

Filmmaker Schulze, however, has lived in Chicago for decades and knows the city well. As he notes in the special features, he surrounded Rathbone and Londo with Chicago actors, including a gruff yet warm "dream detective" (Tony Kirtpatrick) and the serene queen of all dreams, Andromeda, played by the wonderful Wendy Robie, who I will always think of as 'the one-eyed curtain lady' from David Lynch's Twin Peaks.

The film drifts along on its own poetic currents, propelled by positive emotions. Yet there is a strong current of tragedy, acknowledging both fictional deaths as well as the ongoing plague of children and young people who have been abused and murdered in Chicago. It's respectful of these tragedies, even as it is respectful in acknowledging and honoring the Native peoples who inhabit the lands now known as Chicago.

The lovely special features that are available on the DVD from Music Box Films enhance the viewing pleasure. Hugh Schulze's audio commentary often narrates the film, making clear his intentions, while also providing interesting background information on the cast and locations.

The DVD also includes interviews with Schulze, as well as actors Rathbone, Londo, Robie, and Fitgerald, about 12 minutes of deleted scenes (including those of an actor who was cut from the final film), and the theatrical trailer.

It's a fine package for a fine film. Dreaming Grand Avenue feels very much like a local product of Chicago, but it's very broadly appealing, and well-designed for a much wider audience.

Do you feel this content is inappropriate or infringes upon your rights? Click here to report it, or see our DMCA policy.
Andrea LondoHugh SchulzeJackson RathboneMusic Box FilmsTony FitzpatrickUSWendy Robie