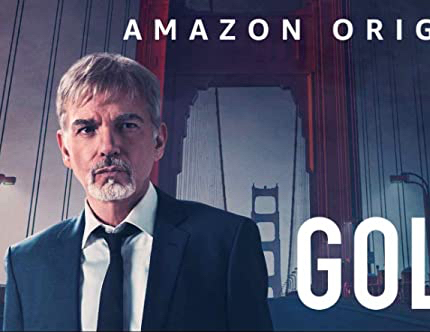 San Francisco can rip your heart out.

Goliath
All 32 episodes of the 4-season series, including the newly available fourth season, are now streaming on Amazon Prime Video. I've seen all 32 episodes.

The opioid industry is the 'goliath' in the fourth and final season of the series, and 'David,' the legendary Los Angeles lawyer Billy McBride (Billy Bob Thornton), starts off in the employ of a large San Francisco law firm.

It's an unlikely starting place for the taciturn attorney, who, once upon a time, was a partner in such a firm, before he was unceremoniously dumped and forced to start over, eventually winning a case against a formidable foe, with the assistance of unlikely associates Patty Solis-Papagian (Nina Arianda), a former real estate agent, and Brittany Gold ( Tania Raymonde), a former sex worker, dramatized in the first season of the series, created and largely written by David E. Kelley and Jonathan Shapiro.

His windfall victory earned him the freedom to pick and choose who or what he wanted to defend next, as dramatized in seasons two and three. As I noted then, I found the second season to be a dispiriting experience. The third season, however, proved to be excellent, a compelling mixture of legal wrangling and populist drama, ending on a cliffhanger, as Billy was shot and left for dead in a parking lot.

The fourth and final season begins on that note, before moving into a markedly different direction, drenched in a far more stylishly dark atmosphere, both in the visual and tonal senses. Directed by Billy Bob Thornton, his first helming effort in several years, the first episode caught me up on a few things that had happened previously, while teasing numerous possibilities for things that were not explained, and also setting up the narrative mystery/drama that is not resolved until the eighth and final episode.

In my experience, that's a rare thing for a serial drama. Written by executive producers Jennifer Aames and Steve Turner, in collaboration with co-executive producer Marisa Wegrzyn, the script accomplishes all this in remarkably neat and intriguing fashion. Aames, Turner, Wegrzyn, and Andrew Matisziw wrote season three and largely wrote season four as well, which gives the series an excellent narrative base, following Billy McBride after his arrival in San Francisco, where Patty has taken a job with a large law firm and recommended Billy to help with their ongoing cases against three pharmaceutical giants, one of which, run by the menacing yet soft-spoken George Zax (J.K. Simmons), has already settled.

There's much more than that, including Billy's difficult relationship with his daughter Denise (Diana Hopper), who has moved away from Billy in both location and in their relationship. All these issues are explored throughout the eight-episode season. Watching the episodes, I didn't find any fat; everything is essential. The storylines are laid out logically, even for non-legalese people like me. The atmosphere is wonderful to behold; it feels like a bold choice to make such changes in the location, even knowing that this is the final season.

The juicy performances are a treat unto themselves. Thornton, Ariana, Raymonde, and Hopper find new facets to reveal -- thanks also to the writers and directors -- while Elias Kotea contributes a strong turn as an insider who knows too much. Clara Wong is especially effective as a brilliant scientist who starts to crumble under the pressure.

Jena Malone and Bruce Dern play people who are damaged in different ways. To me, watching the 80-something Dern create a character who feels authentic and can be craggy, while also making him empathetic and understable, feels rejuvenating. For her part, Malone portrays someone who has agency to some extent, but finds herself treated as someone lesser, in part because of her physical condition, and in part because of her emotional and financial desperation. It too is amazing to watch.

Over its four seasons, Goliath has transformed from a strong legal drama into a potent artistic triumph. Highly recommended.