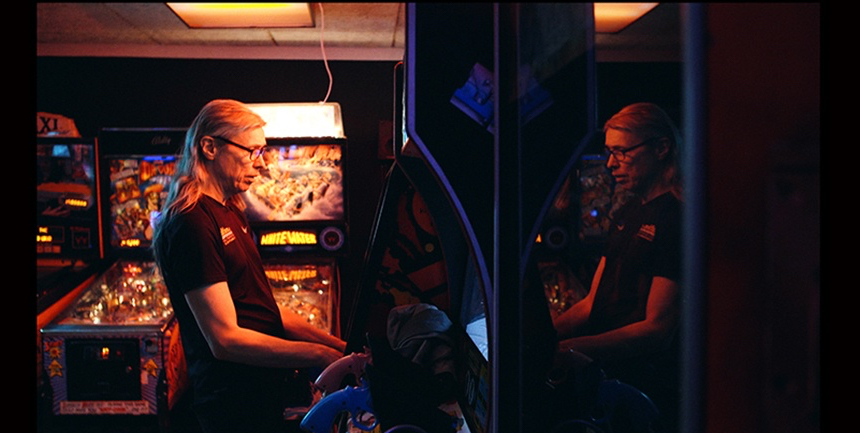 What transforms an ordinary human being into a superhero?

Cannon Arm and the Arcade Quest
The film makes its U.S. premiere at Fantastic Fest.

Taciturn to a fault, Kim may not talk very much, but over the years, he has endeared himself to a group of friends who are intensely loyal to the slender, friendly fellow with an uncanny ability to play a videogame for an amazing number of hours on a single coin.

Gyruss is a classic arcade game that is his favorite, and he only plays on arcade machines, of the type that he played endlessly in his youth, and continues to play to this day. He lives quietly in Copenhagen, Denmark, where he plays at the Bip Bop Bar and has collected a motley group of friends who are each following similar, obsessive paths in their lives, whether it's deciphering the music of Mozart or developing mathematical theories that I can't even begin to fathom.

No one talks of their family or romance or other ordinary things. Once Kim, who became known as "Cannon Arm" in his youth, declares his intention to smash the endurance record for video game playing by playing 100 (?!) hours straight through, his friends coalesce around him in order to help their friend to break the record.

They are eager to serve as his support staff, and spend hours strategizing with Kim to decide on the best ways they can help him stay awake and play an arcade game for more than four days straight. The game itself will not make it easy: the directions for playing are explained at least twice, and I couldn't make sense of it.

No matter. Viewers do not not need to love video games or video arcades, or even marathon competitions. Director Mads Hedegaard, who also narrates in a dry, wry manner, says he didn't know anything about video games before he began the film, but he became drawn in, as one does by making friends and learning about what makes them tick.

That's what happens here, as we learn something about the videogame world in general, but spend most of our time with Kim and his friends, who prove to be quite endearing in their 'normal' lives. They don't talk about love, but their association is overflowing with love for each other: tender concern, and putting the interests of others ahead of their own.

I kept thinking how "scruffy" this documentary looked, which works toward its advantage. It's not some slick, comprehensive overview of gaming in Denmark or on the world scene or anything like that. It personalizes the obsessions of a few friends who love videogames and each other, which makes it increasingly compelling to watch.

Be sure to stay through the credits to see how things turn out. It's worth it, as is this little movie, which has lasting power to affect.

Cannon Arm and the Arcade Quest

Do you feel this content is inappropriate or infringes upon your rights? Click here to report it, or see our DMCA policy.
DenmarkDocumentaryFantastic FestFantastic Fest 2021Mads Hedegaard

More about Cannon Arm and the Arcade Quest