Celebrate THE EVIL DEAD: 40 Years of Fear at The Mystic Museum in Burbank, CA

In 1979, three friends from Detroit set out to make a movie. Little did they know at the time that their labor of love and blood would become a cult classic revered by fans the world over.

The Evil Dead (directed by Sam Raimi, produced by Rob Tapert and starring Bruce Campbell), became the benchmark for aspiring filmmakers proving that you didn’t have to be part of the Hollywood mainstream to get your project made. This tale of college kids fighting flesh possessing demons in a remote cabin in the woods endures to this day making it one of the most beloved horror franchises.

With a new film in the series on the way (Evil Dead Rise) and a video game (Evil Dead: The Game) set for release in February 2022, The Evil Dead is more popular than ever. To celebrate it’s 40th anniversary, The Mystic Museum in Burbank, CA (located at 3200 W. Magnolia Blvd.) has created a terrifying, immersive experience designed to thrill the many admirers of Sam Raimi’s original chilling production.

Sponsored by Evil Dead: The Game, Fangoria and Shudder, this exciting event kicks off on Saturday, Sept. 18. Unfortunately, early access to view the exhibit has sold out. However, the special Deadite Package is still available for purchase for Sunday, Sept. 19. Click on this link to reserve your $20.00 pass. (Please note: General admission tickets will be available at the door starting at 12:30 PM for $15.00).

Here are some of the perks that lucky Deadite pass holders will receive:

In addition to the interactive horror display, there will be an art show, photo ops and a film prop exhibit as well. Some of the artists’ works that will be featured:

If you aren’t able to attend this weekend, don’t worry! The Evil Dead 40 Years of Fear immersive exhibit runs until the end of the year. Doors open every day at 12:00 PM and tickets can be purchased on the premises for $15.00. 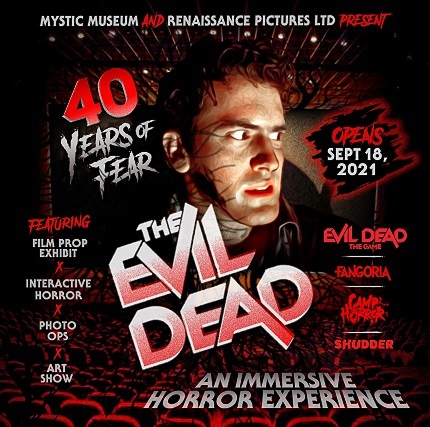 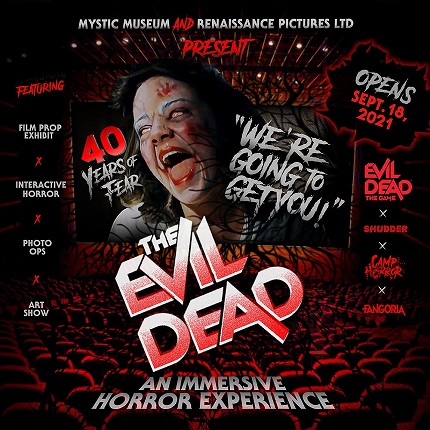