Review: USEDOM: A CLEAR VIEW OF THE SEA, Where Nothing Ever Happens, Except Everything

Director Heinz Brinkman's documentary is an absorbing look at a Baltic Sea Island, diving beneath its surface beauties. 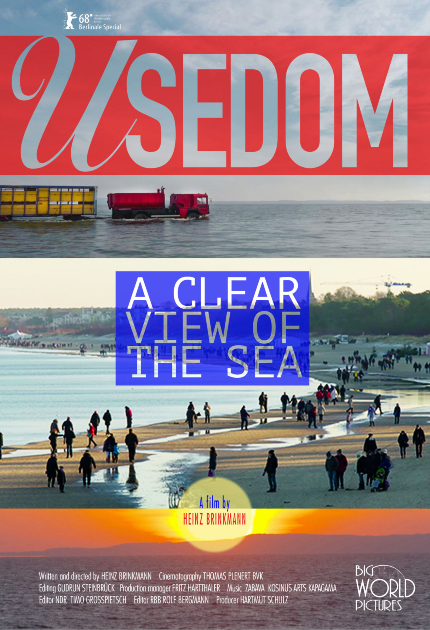 I need a vacation.

Usedom: A Clear View of the Sea
The film is released in U.S. theaters and virtual cinemas on August 13, 2021.

The opening scenes drift by like a summer's dream, lazily, in no particular rush to go anywhere. Then we take a step back and realize that many things are happening, all at once, and are a reflection of past activities that are only now coming to fruition.

Divided between German and Poland in 1945 as World War II came to a conclusion, the Baltic Sea Island of Usedom has long been known as a tourist destination, a calm and peaceful destination for those in search of lovely beaches, natural surroundings, and quaint little seaside towns, good for a holiday break, an extended vacation, or a dream location for a quiet retirement. What of the island's residents, however?

The late Heinz Brinkman, who was born on the island and previously made the documentary Usedom - Ein deutsches Inselleben (1993), returned to the island and completed Usedom: Der frie Blick aufs Meer before he passed away in 2019. Watching the melancholy documentary now, it's difficult to set aside the knowledge that the filmmaker was making a last will and testament, as it were, about his native island, informed by his own years of experience and the willingness of the island's residents to speak frankly with a friendly interviewer.

Brinkman weaves the island's history into his mournful yet dry-eyed narrative, contrasting Usedom's past glories, reflected in archival footage, photographs, and modern views of the island's classical architecture, with the changes that were wrought after the Berlin Wall fell in 1989, opening up the possibility of wealthy investors to swoop in and start buying up real estate on the island, with the intention of filling every square available centimeter with something new.

The clash of sensibilities is most keenly felt by the town's longtime residents, many of whom were born, raised, and remained on an island that is now a strange mishmash of cultural sensibilities. To some extent, this is familiar territory for documentaries, but Brinkman's respectful nostalgia is not ignorant of the island's past sins, and those of its citizens.

To put a modern spin on it, the island is not terribly diverse, yet immigrants have long worked there and even prospered, a few to great success. Others, naturally, are still struggling, along with younger natives who are eager to get out and move to someplace that is more cosmopolitan for their mates and children.

Filmmaker Heinz Brinkman balances the concerns of the native islanders with the immigrants in a very fair manner. For an outsider, the island remains a gloriously attractive place, and Usedom: A Clear View of the Sea is a reflective, calming meditation on the price of becoming known for only one thing, even as multitudes of possibilities bob beneath the surface.