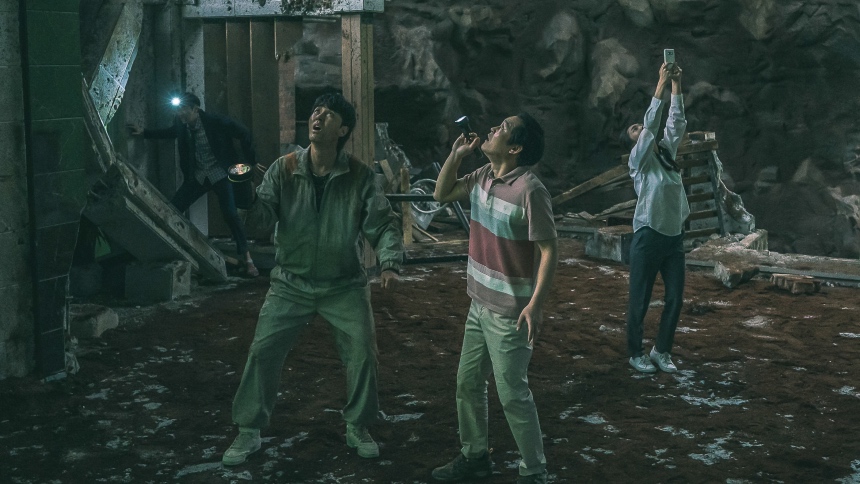 When a new genre catches on in Korean cinema, it tends to proliferate pretty quickly, but before audiences grow tired of it, filmmakers try to find new ways to freshen things up. Take the disaster film. A perennial favourite at the global box office, it was introduced in Korea through Haeundae (aka Tidal Wave) in 2009, at which point the local industry had finally achieved the technical knowhow to pull that kind of a film off.

Many other films have followed, including The Tower, Tunnel, Ashfall and the forthcoming Emergency Declaration, but in 2019, debut filmmaker Lee Sang-geun breathed new life into the genre by injecting a heavy dose of comedy into his disaster hit EXIT, but he also never lost sight of the fundamentals of the genre, delivering a thrilling and vertiginous adventure across Seoul's skyscrapers.

This summer, the disaster comedy returns to Korea with Sinkhole, the closing film of this year's New York Asian Film Festival. The film emulates EXIT's mix of family dramedy and survival thrills, but amid its pratfalls and shoddy visual effects, it struggles to emerge from a hole it digs itself into early on.

After toiling for 11 years, Dong-won (Kim Sung-kyun) has finally achieved his dream: he has become a homeowner. He beams with pride after getting on the real estate ladder and moves in with his wife and son, but the building soon reveals a few troubling quirks, such as uneven floors and cracks in the parking lot. Dong-won also has to deal with his macho neighbor Man-su (Cha Seung-won), who Dong-won keeps running into as he works in the local photo studio and gym, and also temps as a driver.

Dong-won invites his co-workers over for a boozy housewarming party but in the hungover haze of the next morning, disaster strikes. Sodden from days of heavy rain, the ground beneath the building gives way, sucking the five-storey residential block 500 meters below the surface. Dong-won, his colleagues Seung-hyun (Lee Kwang-soo) and Eun-joo (Kim Hye-jun), Man-su and Man-su's son (Nam Da-reum) have survived the fall, but now they must fend for themselves while they wait for help to reach them.

Real estate is an evergreen issue in Korea but of late property prices have been rising especially quickly. Apartment prices are a daily topic of conversation and a prevalent theme in most TV dramas. Dong-won's dreams are relatable, but even though he's bought property, he doesn't live in an apartment block. Instead, his family relocates to a cheaper kind of building known as a villa. During his party, he and his co-workers gaze longingly at the pricier real estate on the horizon and share bitter stories of acquaintances who've gotten rich quick through real estate.

These stories and feelings of inferiority are all too familiar. Rather than offer criticism of a broken system, Sinkhole's premise reinforces the aspirational value of Korea's overpriced and bland sky rises. Since Dong-won can't afford an apartment, he has to move in to a cheaper property, which literally sinks into the ground. Shoddy construction and safety issues have also long plagued Korea, but, whether intentional or not, the film uses them here to reinforce prejudices against any form of property that isn't a branded apartment.

Since viewers likely won't be too concerned with its troubling social implications, Sinkhole's most important assets are its comedy and technical staging. There are some occasional sparks of humor between a frazzled Kim Sung-kyun and a lumbering Cha Seung-won, who used to lead some of Korea's best comedies, like Kick the Moon and Ghost House, but the slapstick and disaster premise seldom gel well.

We may not be expected to believe that a multi-story structure could survive a tumble down a half-mile hole, but narrative impossibilities aside, the cheap and weightless visual effects make it almost impossible for us to see anything but actors prancing around dark sets. At least the art design shines.

The broad comedy and disingenuous social pandering may not be a surprise, but the technical shortcomings are somewhat unexpected, given that this is the latest film from director Kim Ji-hoon, the closest thing Korean cinema has to a disaster film specialist. He was the director of The Tower, Korea's The Towering Inferno, an accomplished ensemble inferno drama that hit its intended mark between melodrama and spine-tingling thrills. Granted, much as Sinkhole follows after EXIT, The Tower was also intended to recapture Haeundae's zeitgeist.

Sadly, director Kim leaves the things he did right in his inferno drama aside, and instead doubles down on the mistakes of his earlier films, namely the histrionic aspects of his treacly Gwangju Massacre drama May 18, and the baffling set pieces of his woe begotten creature feature Sector 7.

Though I won't spoil it here, the ending of Sinkhole is easily the film's most memorable sequence. Astonishingly illogical and cartoonishly staged, it almost works as outrageously silly fun, but as the capper of a consistently lazy and frequently ugly film, it's the last shoddy piece in a house of cards that comes tumbling down before the credits roll.