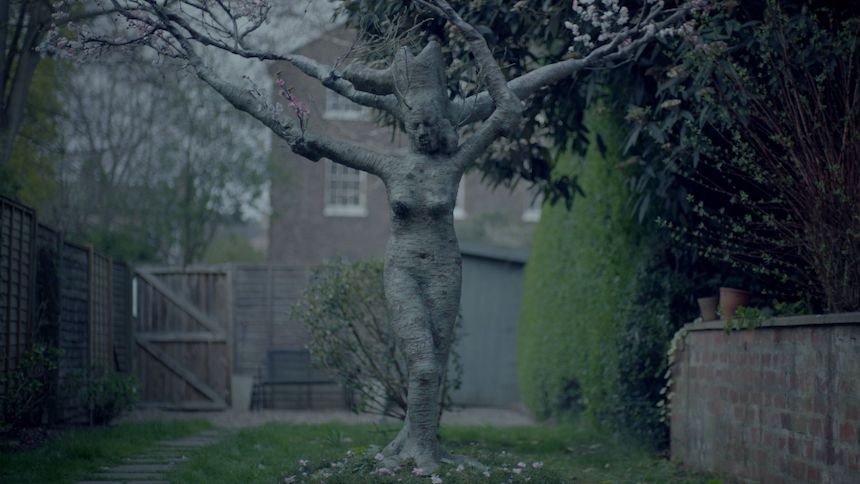 This year's International Science-Fiction Short Film Showcase at Fantasia spotlights works from Canada, Australia, three from the United States and one with a co-production with France, Italy, and even Greenland. (The still used here is from the U.K. short Standing Woman.) Let's get right to this season's films.

Mark II (Brent Howard, United States): Billed as "retro-futurism," Mark II takes place in either the late '80s or very early '90s (which were really still the '80s). The production design, costumes, props, and other filmic techniques definitely bring us back to a not-so-far place in the past, but in another timeline where scrunchies and the ability to put one's mind and spirit into a robot co-exist. Office drone Mark hears that his co-worker is about to get himself implanted into a robot. After a quick burst of research, which is just watching an old-school infomercial with terms and conditions in a font too small to read, Mark decides he wants to do the same. He's sick of being schlubby, but doesn't want to work at it, instead going for a quick fix. Without consulting his wife, he goes for it. Things don't end up as expected; he doesn't come back as a handsome android, but as a tiny, housebound robot, and he's pretty happy about it. A bit too Disney-esque in its happy ending, but altogether enjoyable.

Freya (Camille Hollett-French, Canada): Sometimes funny, sometimes alarming, this great, 16-minute short feels prescient and much shorter than its run time. It follows Jade, a woman living in the near future where our smart homes are powered by artificial intelligence within a true police state. What happens when you make decisions that go against the values and laws of society, or when you make choices for yourself and not the state, like attempting to induce a miscarriage? Like now and forever, the pressure on women and what to do with their bodies is strong in the world of Freya. Like all good sci-fi, we get a glimpse into a future of what could be if we let the wrong people enforce arcane law.

The Girl on the Moon (Georgina Jenkins, Australia): In 2069, Aboriginal girl Luna is the first and only girl to have been born on the Moon. She longs to go to Earth, of course. This short utilizes the Unreal Engine, which is pretty cool. At only five minutes, The Girl on the Moon feels a bit too short, but I assume this is either set up for a sequel or exists on its own as a proof of concept.

Updated (Nivi Pedersen, Greenland): I don't think I've ever seen a film from Greenland, so this by itself was refreshing. In Updated, a beautiful older woman suffers from dementia some time in the future. The woman experiences the past while still living in the present and due to her disease and some strange lenses in her eyes, suffers from horrifying hallucinations. The film asks questions about how to help care for our elders where technology and privacy intersect. Well-acted and very well-directed, with a shocking moment. I want to see more of this world, and this interesting premise --- there's a lot of substance in this 17-minute short, and I'm sure there's more than enough to expand. Excellent work.

The Offer (Sam Shapson, United States): This big-budget short comes wrapped in woodsy, science-fiction athleisure in this sci-fi drama that's more drama than sci-fi. Two sisters convene in the forest on a mountain top, in what is likely a proof of concept for a television series or full-length, feature film. It's beautifully shot and quite slick, professionally. There's a lot to like, but it never struck an authentic chord with me.

Rachels Don't Run (Joanny Causse, United States/France): A customer service rep for an artificial hostess service (bots that serve clients looking to connect, but with a safe edge) decides to impersonate one of them. She enters into a deep conversation, but goes too far, and is nearly discovered by the entitled male client, who complains about Rachel, his female A.I. hostess' issues. This short film is a spotlight on the disconnection we suffer as humans in a world where technology has replaced how we'd normally interact with each other. The result is sad and poignant.

Silly Human (Cory Williamson, United States): You'd never know that Silly Human is a student film without its logo and credits, because it speaks of an emotional sophistication that's not often earned in filmmaking until a few features or several shorts into a career. In the world of Silly Human, we're on a soundstage where an A.I. is the director of a popular 1950s-esque sitcom. This retro film is shot in black and white, and if I remember correctly, it's shot in 4:3 to reflect its television surroundings. The A.I. is programmed to be voiced as a stereotypical abusive male director, which spouts microagressions and snark to the newest cast member of the sitcom. This actress is warned by the long-standing male lead that anyone cast in the wife role opposite him never lasts more than two episodes. The humans wear shock collars, and well, you can imagine what happens if the A.I. is continually disappointed in a performance. This film's empathetic touch with its characters in light of the harsh overlord of the director also serves to highlight the masks we wear to hide our discomfort and fear in a world of slavery and absolute control. I'd love to see a feature version.

Standing Woman (Tony Hipwell, United Kingdom): Based on a short story by Yasutaka Tsutsui (Paprika, The Girl Who Leapt Through Time), Standing Woman wowed me with its direction, somber mood, practical effects and creature design. It's also well-directed and acted, and its drab palette reflects a dour existence in the United Kingdom where, once again, the state steps in and severely punishes those who don't play by whatever arbitrary rules. In this case, criminals of the state are planted and turned into trees. Trust me, it's so much cooler than it sounds. Eventually, they stop feeling pain and stop feeling human as they segue into vegetation. In the hands of a lesser filmmaker and source material, Standing Woman would not be as creepy, and meditative and poetic as it is. I hope this one gets expanded to a full-length film, because there's a lot to explore here.

The Recycling Man (Carlo Ballauri, Italy): In a block where there's so many strong films, this one is a standout with its worldbuilding. It's interesting to note that the block is just about bookended with films on women's bodies and pregnancy, choice, and a fascist police state. Whereas Freya explored a mostly internal world and one woman's struggles, The Recycling Man looks more outward and externally. This film appears to have had a big budget, mainly for the visual effects in its extreme wide shots of a possible post-apocalyptic landscape. Taking place in this burned out, industrial future, a child in a wheelchair spies on happenings with the neighbors Rear Window style. He sees a kidnapping and tells his hardened mom, who looks like she's seen some shit. Mom also has to deal with a pregnant neighbor who's looking to escape or hide. It's life in a "if you see something, say something" world. It's the same kind of world in which you violate the law if you get pregnant, so you can imagine that neighbors turning each other in becomes rampant and violent. Strong acting, directing, pace, and story. I'd really like to see more of this terrifying dystopia --- though not in real life. I can imagine The Recycling Man would make an excellent series or feature.

Do you feel this content is inappropriate or infringes upon your rights? Click here to report it, or see our DMCA policy.
Fantasia 2021science fictionshort films