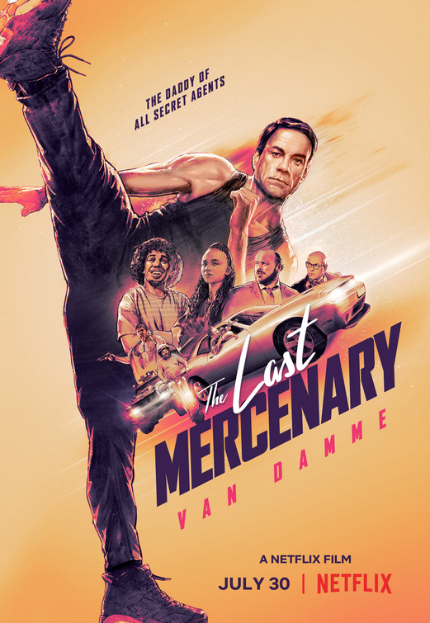 When is an action-comedy not an action-comedy? When it’s The Last Mercenary (Le dernier mercenaire), a French-language film starring the former “Muscles from Brussels,” Jean-Claude Van Damme, that’s woefully short on both action and comedy.

Between a handful of lazily directed, poorly choreographed action scenes and flaccid, faux-jokes without recognizable punchlines or laugh-lines, The Last Mercenary is a disappointing must-miss, a shockingly awful effort from a long-lived action star whose occasional ventures into self-parody, specifically JCVD, suggested more self-awareness and an uncharacteristic willingness to poke meta-fun at himself, his hyper-masculine action-star persona, and the slings and arrows of 20th- and 21st-century commercial filmmaking, than Van Damme had displayed in almost everything before (and since) JCVD.

The Last Mercenary opens semi-promisingly, with Van Damme’s character, Richard Brumère, a onetime French secret service agent (“the best of the best, etc.”) inexplicably turned mercenary, hanging in mid-air, legs impossibly splayed, as fourth-rate thugs out of a straight-to-streaming or VOD action entry threaten a young, kidnapped man’s life. Brumère dispatches them with ridiculous ease, as expected, though the scene, directed and co-written by the little-known David Charhon (Les naufragés, On the Other Side of the Tracks, Cyprien), leans heavily into the comedy side of action-comedy.

Before he can complete the far-flung assignment in the former Soviet Union (i.e., the Ukraine), however, Brumère receives a potentially life-changing phone call: Archibald (Samir Decazza), the large, adult son he’s never met in person, has lost the governmental immunity and monthly stipend Brumère acquired for him as part of a vaguely defined deal more than 25 years earlier that protected Archibald in exchange for Brumère’s permanent exile. Or something.

With Archibald newly vulnerable and Brumère, a man with a price on his mercenary head and a target for disgruntled government bureaucrats and a high-ranking official, Ministre Sivardière (Valérie Kaprisky), semi-obsessed with keeping Brumère's return a secret, the stage is set for Archibald and Brumère to not only cross paths as expected, but reluctantly join forces against  government corruption, a mercenary duo eager to burnish their reps by eliminating Brumère, and a Middle-Easterner, Simyon (Nassim Lyes), with an unhealthy Scarface obsession and a heavy-handed father back home.

The shoddily thrown-together screenplay also features a bumbling, stumbling, fumbling French bureaucrat, Alexandre (Alban Ivanov), who serves primarily as the object of low-brow, ableist humor, his contemptuous boss, Paul (Eric Judor), and Brumère’s former-ally-turned-enemy, Commandant Jouard (Patrick Timsit). Jouard serves primarily as the cringe-inducing receptacle for beta-male jokes (no guesses as to the identity of the alpha male in the equation), while Archibald, no alpha male himself, serves as the other one, though Archibald’s status as Brumère’s son guarantees a “redemption” of sorts. He may lack his father’s physical skills, self-confidence, or reaction time, but he also finds a way to extricate himself from a potentially deadly situation.

The abject laziness of the script extends to the virtual lack of action, comedy-inspired or otherwise. It seems like The Last Mercenary’s modest budget allowed for exactly one big action scene (the first scene), one chase scene (somewhere in the middle), a mildly amusing action scene set inside a gym locker room/bathroom, and a small-scale climax involving Brumère in a wig and dress taking down the usual assortment of interchangeable thugs without losing his wig or ripping a hole in his dress.

By the time The Last Mercenary reaches its supposedly uplifting all-for-one, one-for-all denouement, it has outstayed its welcome by more than a half hour (if it was ever welcome at all).

The Last Mercenary is now streaming on Netflix. 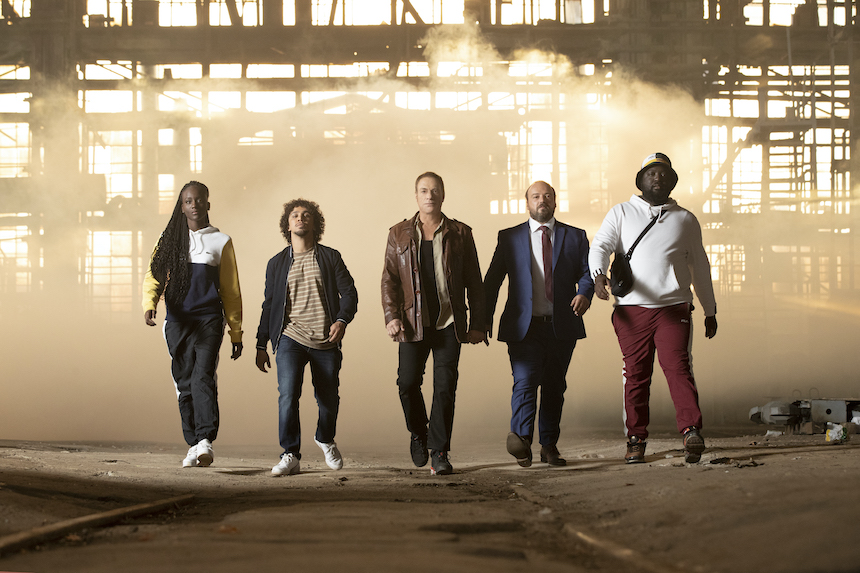