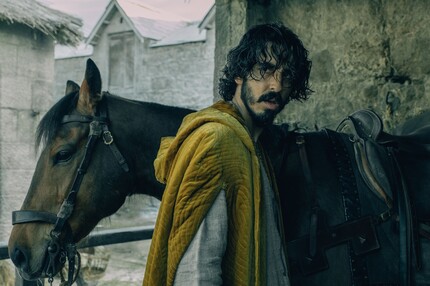 There is a scene early in The Green Knight, where our 'hero', Gawain, thinks he has beaten the odds; he stepped forward when none of the knights at the Round Table dared to accept the Green Knight's odd challenge, and Gawain believes that the swift cut of his blade has saved the day. But a bit of mediaevel magic happens, and the look on our hero's face reveals how little he knows and understands of the world he inhabits, and how that knowledge might just kill him.

David Lowery's The Green Knight has been hotly anticipated since its premiere was pushed back from 2020, and while it's arguably technically a Christmas film (hint to those who program films for the festive season), it fits the bill as a summer adventure film, an art house film, a historial drama, a fantasy, a horror, and all these labels might make it seem like the film (or I) can't decide what exactly it wants to be. And yet, all these elements blend perfectly in the Chivalric tradition, and Lowery and his team has evoked that tone of the fantastic, the dark humour, the bleakness, and the magic.

Gawain (Dev Patel) spends his days maybe learning some sword fighting, maybe sleeping, and his nights drinking or at the local brothel with his favourite lover, Essel (Alicia Vikander). But his mother, Morgan le Fey (the mesmerizing Sarita Choudhury) has other plans; at Christmas lunch, while Gawain is with his uncle, King Arthur (Sean Harris), she casts a dark spell, and The Green Knight arrives with a challenge. But what Gawain thinks is a simple matter turns out to be complicated, and possibly deadly; and so nearly a year later, he must set out for a dangerous ride to the north to face his fate.

The Arthurian legend and its surrounding stories have always been weird; yes, there are witches and dragons and magic and knights and feast, as viewers are familiar with (especially with recent television shows), but going back to the original Chivalric literature, written moslt at the end of the Dark Ages, when the western European world teetered between Paganism and Christianity; where the latter was appropriating the rituals of the former for its own; when people wore crosses and had conversations with foxes. As noted, the film finds the humour and storytelling richness in the absurdity of Gawain's situation, but it's not often that these films evoke the necessary bleakness and emptiness that the era commands.

For much of the film, Gawain is alone; this land, and this world, does not have the kind of population that means he can just wander into a local village to find assistance. Which way should he turn? Which fellow wanderer should he trust? Gawain is forced to learn from his easy trust and his mistakes; a man coddled his entire life has been thrown to the wolves and the empty world, and he must adapt or die. While the characters don't speak the Old English of the time (none of us would be able to understand it), the dialogue in Lowery's script is infused with this strangeness, this loneliness, that comes from a world where the lives of most are nasty, brutish, and short.

This world is not one bursting with colour and vibrancy; while it is beautiful, it is tainted all around with a dreariness (no wonder people tended to stick to the castles). Director of Photography Andrew Droz Palermo centres Gawain in this landscape not as a hero, but just one small point in a place must vaster and more frightening than Gawan could possibly have imagined. The weirdness and bleakness of the first half of the story give way a bit to a more earthy, lustful tale, as Gawain sees the literal and metaphorical routes he could take into full manhood, with the rights and responsibilities therein. The heaviness of the head that wears the crown means a heavy and often brutal hand, and Gawain's adventures, both quaint and dark and humiliating, lead him to a final choice.

Patel is uniquely situated to play Gawain, having both a boyish charm and winning smile, and knows how to slowly move towards the gravitas and maturity over the course of two hours. The acting ensemble moves towards a quiet oddity and sombre presentation, rather than the bombasity often associated with knightly tales; it serves to keep the audience within this strange tone, finding us, like Gawain, with one foot in the fantastic and another in the real, with him on cusp of his growth. As noted, Choudhury is dark and terrifying as she casts her dark spell, and Erin Kellyman as Winnifred, to whom Gawain offers some rather unusual assistance, and Barry Keoghan as a vagabond, show different sides of this world outside the protection of castle walls.

By setting a tone of the unusual, the dark, the austere, and the absurd bordering on madness, The Green Knight offers something unique and unsettling in a fantasy-adventure: a taste of that which would have been the mood of those in that time, when coins were buried at the base of trees becasue you could be robbed of everything at any moment; when fields of dead and decaying bodies were a frequent sight; where talking foxes and swords drawn from stones to crown a king were accepted on sight. Leaning into the Pagan roots of the story, The Green Knight keeps its story on the side of the beautiful and terrible.

The Green Knight will be release in The United States and Canada on Friday July 30th, and other countries shortly.

Do you feel this content is inappropriate or infringes upon your rights? Click here to report it, or see our DMCA policy.
David LoweryDev PatelAlicia VikanderJoel EdgertonAdventureDramaFantasy

More about The Green Knight