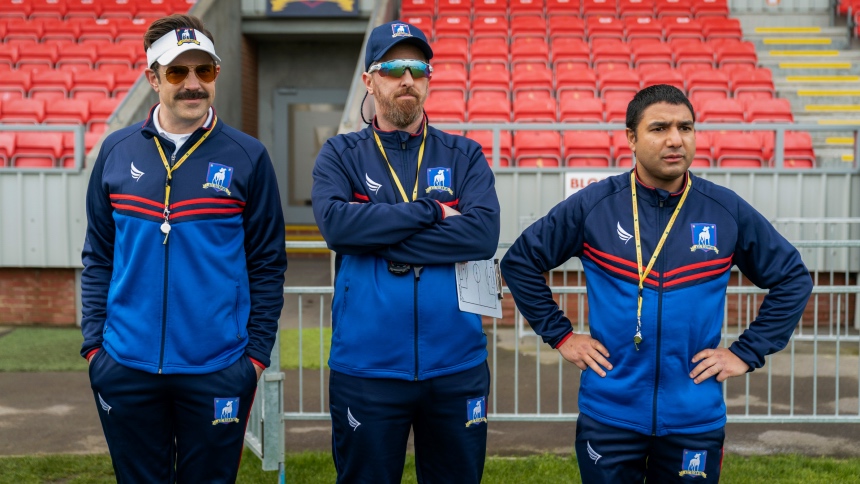 It is time to stop your sobbing.

Since I live in Dallas, Texas, where American football is practically a religion, I thought I'd heard every joke in the world about the differences between American and British definitions of football, and thus I did not hurry to check out Ted Lasso after it debuted last year. (Also, it took me a while to figure out how to use the Apple TV+ streaming service on my television.) Positive reports on the series came to me via Facebook, however, notably a rave by my former colleague Peter Hall, and so I was spurred to check it out after I returned home from hospitalization for a stroke.

Badly in need of something cheerful and -- dare I say, uplifting -- I was pleasantly surprised by the clever dialogue, brimming with insightful and witty cultural observations, that elevated Ted Lasso into the upper stratosphere of streaming series. Arriving as it did in the midst of the worldwide pandemic but having nothing to do with the pandemic, it felt like a warm embrace from a trusted friend.

Naturally, the prospect of a second series made me wary, especially since the first season came to a very satisfying conclusion. I needn't have worried, though.

To backtrack a bit: Jason Sudeikis portrays the titular character as a positive-thinking individual, the kind who always looks on the bright side, always has a smile on his face, and always speaks with a broad middle-American twang. Having achieved some success coaching an American college team (Division II, or second-level), he views the opportunity to coach a Premier League team as a promotion. Which, indeed, it would be, except that he's only been hired by new owner Rebecca Welton (Hannah Waddingham) with the expectation that he will fail miserably and thus exact gleeful vengeance upon Rebecca's former husband, who treated her quite badly, but was more faithful to his beloved football team, which he lost as part of their divorce settlement.

Things don't turn out as everyone expects. The team eventually buys into Coach Lasso's relentlessly cheery attitude and coaching strategies, finding a measure of success on the pitch. Behind the scenes, the show gave a fresh spin on workplace comedies, even as it trotted out old cliches and rusty stereotypes.

The new season begins by riffing on some of the same old stereotypes, though it works actively to show how each of the primary ensemble (notably, Juno Temple) have mellowed or developed or become radicalized or more self-confident or slipped into greater trouble. I suppose the most significant new player is a sports psychologist, who gives everyone a guarded new target to receive their closely-guarded secrets.

The show features far more raunchy language and obscenities than I remembered from the first season, but perhaps I'm just more sensitive to frankly rude talk. The laughter quotient remains high for me; the more things change, the funnier things get, in large measure because the characters are better defined and the actors have a better handle on what makes their personalities distinctive, and different from everyone else.

Even though I had higher expectations for the show, through the first six episodes of Season 2, my expectations have been exceeded, which is a very pleasant surprise.