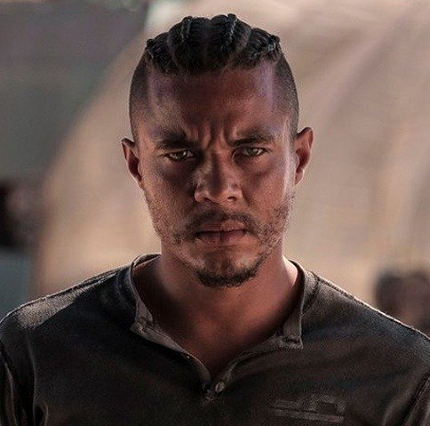 Uniquely American, the Western genre has changed radically over the last century, from nationalistic, myth-building propaganda to revisionist self-critique, specifically of the colonialist narrative that centered white Europeans and left indigenous peoples, in the margins at best or primitive, violent savages at worse.

Less rectified than simply ignored or set aside as a once dominant genre faded into disuse, the colonialist-imperialist narrative still exists, albeit often transposed to other settings and time periods like writer-director Wyatt Rockefeller’s feature-length debut, Settlers, a deeply unsettling, discomfiting exploration of a simple, if still provocative, thesis: Wherever we go, there we are, bringing our biases, prejudices, and propensity for violence to frontier life even in a far-flung, futuristic Martian settlement.

When we first meet Reza (Jonny Lee Miller, Elementary), his life-partner, Ilsa (Sofia Boutella, Kingsman: The Secret Service), and their preteen daughter, Remmy (Brooklynn Prince, The Florida Project), they’re quietly eking out a subsistence lifestyle, tending to plants and animals on a small patch of the dry, dusty Martian landscape. At night, Reza and Remmy bond over his intentionally vague descriptions of life on a long-lost Earth where climate change and environmental despoliation have made life there nearly impossible.

For an increasingly curious Remmy, Reza’s stories aren’t enough, something Reza seems to acknowledge by mentioning Remmy running away. Where Remmy can go in a barren, seemingly desolate, uninhabited Mars, however, seems to be an open question, one Remmy doesn’t answer for herself — and by extension, the audience — until the final moments  when she makes a life-changing decision that will determine her future, if any, on Mars.

Not everyone makes it to the end credits, though, an unsurprising development given the unexpected arrival of Jerry (Ismael Cruz Córdova, The Undoing), a volatile, angsty outsider who claims Ilsa and Reza’s homestead originally belonged to his family and thus belongs to Jerry as his inheritance. Seeing Reza, Ilsa, and Remmy as squatters and intruders, Jerry initiates a violent takeover, thus setting up the central, overarching conflict in Settlers, between the colonized and colonizer, with the definition of colonized and colonizer essentially a function of time (i.e., whoever got there first can claim the land and everything on it).

With Jerry displacing, if not outright replacing Reza, an uneasy truce fueled by mutual need emerges between Ilsa and Remmy on one side and Jerry on the other. Jerry, however, can’t escape either his violent past or his ideological leanings and with violence or the threat of violence hanging over the film until its final moments, it becomes increasingly clear that mutual coexistence is a near impossibility.

To his credit, Rockefeller doesn’t provide easy, pat answers to the questions he raises. Though our initial sympathies are with Reza, Ilsa, and especially Remmy, our viewpoint character throughout the entire film, culminating in the final third with a grown-up Remmy (Nell Tiger Free) retaking the agency the adults in her life denied her for almost two decades. There’s less hope in Remmy’s eventual decision than the inevitability inherent in a tragedy where everyone, from Remmy’s parents, Jerry, or herself (stand-ins for their frontier experience), can escape their worst impulses, to take by force and violence what they can’t take by persuasion or argument.

Settlers isn’t exactly uplifting or optimistic about what kind of post-Earth experience awaits us in the off-world colonies, especially for the non-billionaires among us. Considering an ongoing global pandemic, a rapidly worsening climate crisis, and escalating authoritarian threats to fragile democracies everywhere, Settlers feels like an imperfect mirror for our imperfect times. Lessons unlearned about American and Western history, Rockefeller argues, will have to be learned one way or another, here or elsewhere, if we’re to stand a chance of surviving the next century.

Settlers is now available theatrically and on-demand via IFC Midnight.