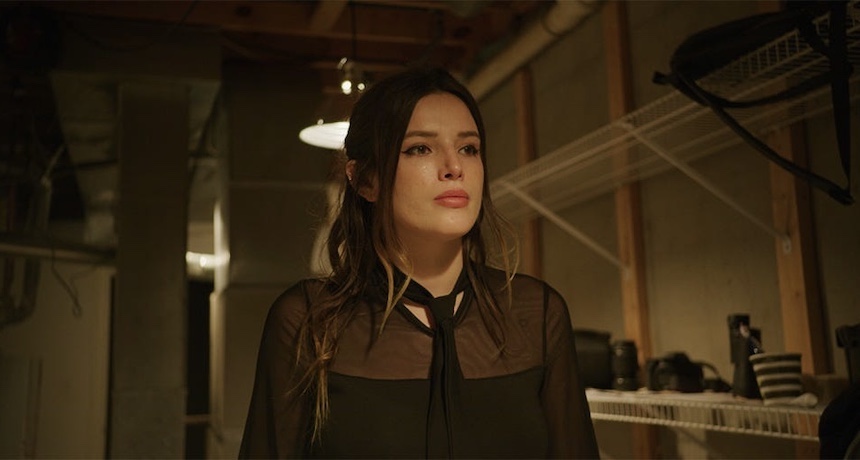 As a sub-genre of horror (a broad, at times vaguely defined category), the home-invasion thriller figuratively preys on the near-universal fear of the sanctity, safety, and security of whatever we call “home,” an inviolate, inviolable space, invaded by malevolent outsiders, intent on doing us harm.

If no space with locked doors and windows isn’t safe, then nothing is safe. Gated communities promise us an additional layer of safety, but even there, that safety can prove to be, if not nonexistent, then illusory. That alone can make the sub-genre the most inherently terrifying, though much depends on a combination of story, character, and, of course, execution.

Which brings us to Masquerade, writer-director’s Shane Dax Taylor’s slickly efficient, economic contribution to the home-invasion sub-genre. With former Disney star Bella Thorne (The Babysitter: Killer Queen, The Babysitter, Shake It Up) in a split lead or supporting role as Rose, an enigmatic young woman tangentially involved in a home invasion, keeping the owners, Daniel (Austin Nichols) and Olivia (Mircea Monroe), otherwise preoccupied, first at a charity event and later when she volunteers to slow-drive them home to their McManson in a gated community, Masquerade centers primarily on Casey (Alyvia Alyn Lind), a teen initially enjoying a quiet night with her babysitter, Sofia (Joana Metrass), while her parents enjoy a night of their own apart from their only daughter.

Just as Casey begins prepping for bed with an assist from Sofia, the power goes out, signaling the end of her life as she knows it. Almost immediately, a male-female duo dressed in black wearing fencing masks break into her now unprotected home and incapacitate Sofia, leaving Casey to fend for herself.

The thieves aren’t after Casey. She’s just an inconvenient obstacle to their real goals: Stealing the extremely valuable art that adorns the walls of Casey’s home. They’re not, however, typical smash-and-grab thieves. They need time to take down paintings, carefully extricate them from their frames, and store them in padded tubes for transport.

Casey manages to elude the thieves, first blocking access to her bedroom and then using her intimate knowledge of her home to evade capture and hiding from the thieves. It’s only a matter of time, however, before the thieves, specifically the female member of the duo (Skyler Samuels), finds Casey and tries to coax Casey into surrendering. As Casey and the thieves play a deadly game of cat-and-mouse, Taylor toggles between Casey and Rose’s attempts to delay Daniel and Olivia’s arrival at the family home, missing an exit here, driving past a turn there, but those delays can only last so long before the two stories inevitably merge at Daniel and Olivia’s powerless McMansion.

Somewhat to his detriment, Taylor wastes little time setting up the premise, the characters, or their relationships to one another. Outside of Rose in the latter/last moments of the film, the characters have little depth beyond their specified functions story-wise, meaning sympathy or empathy at their respective plights begins and ends with basic personality traits or generic backgrounds.

Rose, a part-time restaurant worker and self-described Uber driver, mentions her art school status to Daniel and Olivia, wealthy art brokers (Olivia notably knows almost nothing about art), but that’s as much detail until the final scenes reveal her connection to Casey and almost as importantly, the narrative game Taylor has been playing with the audience from the opening scene to the last.

It’s a clever plot device, though it’s the kind of story-based trick that once, revealed, makes more emotional and thematic sense than a narrative one. Taylor also risks alienating a significant subset of his audience once the Big Reveal hits, especially as said audience might feel like they’ve been deceived or fooled, thus breaking the unspoken contract between filmmaker and audience for a certain level of honesty, at least where narratives and plot devices are concerned.

Even with that potential misstep, Masquerade never outstays its welcome, delivering a fleet-footed, swift-moving home-invasion thriller with just enough tension, suspense, and conflict to justify its slim 80-minute running time.

Masquerade will be released July 30 via digital, on-demand, and in select movie theaters.

Do you feel this content is inappropriate or infringes upon your rights? Click here to report it, or see our DMCA policy.
Alyvia Alyn LindAustin NicholsBella ThorneJoana MetrassMasqueradeMircea MonroeShane Dax TaylorUS