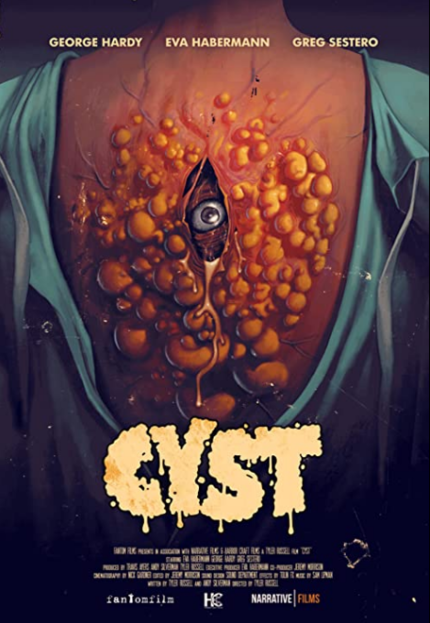 There just aren't enough movies these days about man-sized sentient pus monsters, and that's a shame.

Set in the early '60s, Tyler Russell's Cyst is a throwback creature feature that embraces the goofiness of the era's drive-in fare with a knowing wink and a great deal of love. Dermatologist Dr. Guy, played to the hilt by Troll 2's George Hardy, is a proto Dr. Pimple Popper, who seems to spend his entire day surgically draining various enormous cysts, which seems to always result in huge geysers of pus flying around his office. Unfortunately for his nurse, Patricia (Eva Haberman), it seems that the vast majority of this bodily waste appears to end up showering her in disgusting goo.

But Dr. Guy has big dreams, an experimental laser will be his ticket to riches if he can just get it past the patent examiners coming to visit. Patricia has less faith in his machine, and the scars to prove that it's probably not ready for prime time, and soon an argument between the two sparks her to declare that she's quitting, she just needs to finish out the day and she can start a new life. But it's never that easy, is it?

When the good doctor's demonstration goes awry, his machine inadvertently creates a giant, man-eating pus monster that has set its sights on devouring every living thing in the office. What was to be his triumph has become a deadly folly, destined to punish him and everyone it its path for his hubris. And hoo boy, is it fun.

In this world of genre cinema so overloaded with films trying desperately to turn every monster into a message, it's refreshing to have something like Cyst to remind us that it's okay to just make something fun. It's a quick moving little film, laser focused on a cast of half a dozen or so potential victims careening through this doctor's office looking for a way out. It is beautiful in its simplicity.

A fun little gross out with a killer cast, ace practical effects, and plenty of goo to go around, Cyst is a perfect crowd-pleaser. Living in the same tonal universe as the work of Larry Blamire (The Lost Skeleton of Cadavra), Russell and his extremely game cast and crew have come up with something truly outrageous and fun, and just the thing to take our minds off the trash fire that has been the last eighteen months.

Do you feel this content is inappropriate or infringes upon your rights? Click here to report it, or see our DMCA policy.
Tyler RussellAndy SilvermanEva HabermannGeorge HardyGreg SesteroHorrorSci-Fi