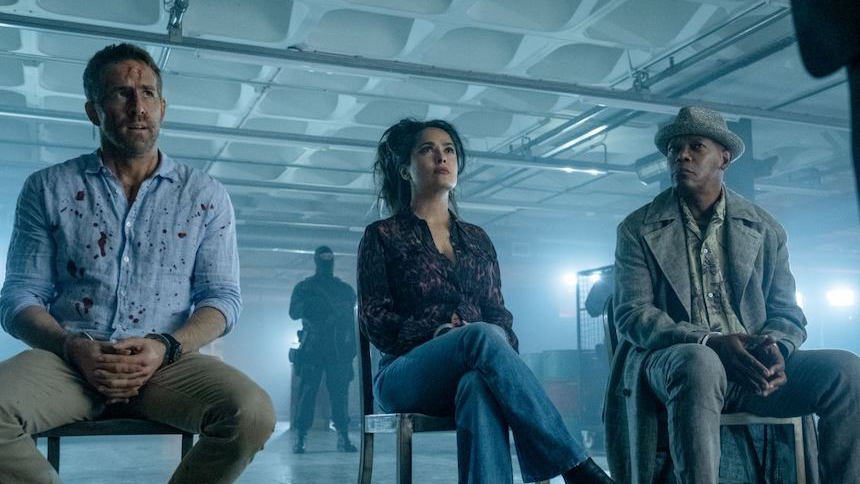 If there was an Academy Award for Best Skincare Routine And/Or Genetics (All Ages Category), Salma Hayek undoubtedly would take the award going away. There isn't, unfortunately.

Hayek, though, is practically flawless every time she makes a welcome appearance in the awkwardly titled The Hitman's Wife's Bodyguard, the not unexpected follow-up to the already forgotten, surprise 2017 box-office hit, The Hitman’s Bodyguard. Stepping up from a deliriously demented, if glorified, cameo to full-blown co-lead, Hayek brings her oft underused star power to Sonia Kincaid, the ultra-possessive, hyper-manic, sociopathic wife and partner-in-international crime to Samuel L. Jackson’s Darius, an unrepentant, expletive-prone, globe-trotting assassin-for-hire and inadvertent do-gooder, the “hitman” in The Hitman’s Bodyguard to Ryan Reynolds’s perpetually put-upon, mildly milquetoast “bodyguard.”

When we catch up with Reynolds’s character, Michael Bryce, a onetime AAA executive bodyguard and security expert to millionaires, billionaires, and multi-billionaires, he’s still reeling from the previous film’s events, including the impromptu collaboration with Darius that might have saved Europe from conflict and war, but left Bryce suspended from the John Wick-inspired international agency. Pending a hearing that might never come, Bryce gives in to his exasperated therapist’s advice and agrees to go on a weapons- and work-free vacation to the island of Capri. (In the first of seemingly countless, low-wattage jokes sprinkled prodigiously throughout The Hitman’s Wife’s Bodyguard, Bryce responds to the suggestion of vacationing in Capri with “Like the pants?”).

Bryce’s vacation doesn’t last long before Sonia enters the scene, guns blazing and bodies flying. A slightly clever gag juxtaposes Bryce’s obliviousness (he’s wearing headphones and reading “The Secret”) to the bloody carnage around him before Sonia tears him away from vacation for the inevitable escape from faceless, disposable henchmen of vaguely European origin. Sonia demands Bryce’s assistance in rescuing the recently kidnapped Darius from some Italian mobsters, a demand Bryce weakly attempts to resist before agreeing to help Sonia. Bryce doesn’t so much help as provide a steady stream of whiny commentary about anything except the immediate task at hand.

Bryce’s uselessness and/or cluelessness provides The Hitman’s Wife’s Bodyguard with its central dynamic: He hinders more than he helps, existing primarily as a foil to Darius, Sonia, and a marriage floundering on their inability to conceive a child. Bryce all but steps in as surrogate son to Sonia and Darius, witnessing the ups and downs of their hyper-exaggerated relationship without the ability to influence any particular outcome. To over-emphasize the parent-child dynamic further, The Hitman’s Wife’s Bodyguard also gives Bryce a separate father figure, one he’s undoubtedly disappointed in the past due to his inability to live up to the AAA Bodyguards-R-Us Agency (or whatever it’s called) and its rigorous standards.

Since Darius’s rescue takes up all less than 30 minutes of The Hitman’s Wife’s Bodyguard blissfully short running time, another, time-filling plot has to fill in the rest: Aristotle Papadopolous (Antonio Banderas), an anti-EU Greek billionaire and sub-basement Bond villain with a plan to knock out Europe’s digital infrastructure, thus somehow pushing a relatively powerless Greece back into prominence (or something). It’s never exactly clear how Papadopolous and his plan works or what effects it’ll actually have, but that’s unimportant in the grand scheme of action-comedy things, like Papadopolous and propensity for wearing the kind of colorful, couture-level attire that inevitably will turn into the source of listless, flaccid humor.

Much of what passes for comedy in The Hitman's Wife's Bodyguard also falls into the same uninspired category. Returning for a second go-around, the director, Patrick Hughes (The Expendables 3, Red Hill), and his screenwriting team, Tom O'Connor and Brendan Murphy, no longer have the benefit of novelty that the first film offered audiences, so they rely on an unsustainable combination of callbacks to the first entry and the central trio frantically screaming their lines at top volume during incoherently choreographed, shot, and edited car chases, periodic walks-and-talks, and sit-down dialogue scenes. And when that doesn’t work, Hughes relies on sight gags ranging from the juvenile to the sophomoric or a rapidly increasing, if ultimately meaningless, body count.

With Reynolds and Jackson often looking like they’d rather be enjoying the natural beauty of Italy away from the set or production, Hayek gives her absolute all to Sonia, adding a level of pathos to Sonia and her underwritten character arc that doesn’t appear anywhere on the page. Unfortunately, Hughes and his screenwriters couldn’t be bothered to give Sonia even the barest hint of depth or dimensionality, instead relying on tired Latinx stereotypes that should have been retired the last millennia. It’s really a pity. Salma Hayek deserved better from The Hitman’s Wife’s Bodyguard. Then again, so did we.

The Hitman's Wife's Bodyguard will be released theatrically on June 16.