Review: THE CONJURING: THE DEVIL MADE ME DO IT, A Floundering Franchise Missing the Wan Touch

Patrick Wilson and Vera Farmiga reprise their roles in the horror thriller series, directed by Michael Chaves, in theaters and also streaming on HBO Max. 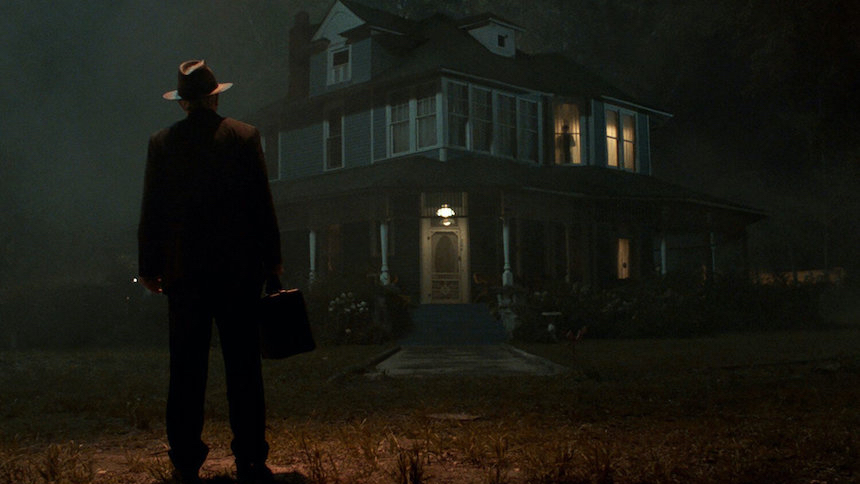 With a head-scratching, borderline laugh-inducing subtitle like “The Devil Made Me Do It,” it wouldn’t be entirely surprising for casual moviegoers or streaming viewers to guess that the latest addition to the ever-growing Conjuring-verse, The Conjuring: The Devil Made Me Do It, wasn’t actually a studio-sanctioned sequel, but a Scary Movie-inspired, gag-filled parody or a broad satire made by off-brand producers hoping to cash in on the Conjuring-verse's ongoing popularity.

Thankfully, it’s not, but eight entries into a franchise that impressively began with horror auteur James Wan’s (Aquaman, Death Sentence, Saw) The Conjuring in 2013 and continued with sequels, prequels, and spinoffs since, it’s clear the series either needs to take a much-needed break or find a new team to help revitalize it before it’s too late and The Conjuring brand becomes synonymous with studio-made, sub-par horror barely worth a stream, let alone a rental or an in-person theater experience.

Once again relying on the “based on a true story” line that gave the first and second entries in The Conjuring series an added layer of reality-adjacent dread and terror, The Conjuring: The Devil Made Me Do It purports to be drawn from the dusty, mold-covered files of real-life paranormal researchers and part-time demonologists Ed (Patrick Wilson) and Lorraine Warren (Vera Farmiga) and their decades-long battle against supernatural evil (Roman Catholic Edition) and the non-believers, cynics, and skeptics who questioned the Warrens and their real intentions (i.e., a peculiar form of self-delusion or con-artists/grifters).

The series, of course, has always treated the Warrens with the same straight-faced, camp-free seriousness about their claims that they themselves preferred in dealing with the mainstream media or via the profit-generating books they sold under their respective names, all but making them into (super) heroes for true believers, minus capes and cowls, of course, but plus the Holy Bible, the crucifix, and holy water as the only weapons they'd need to combat malevolent ghosts, cursed objects, and demomic possession. The Warren-centered films also make a repeated point about the Warrens and their mutual love, respect, and affection and the central importance of their monogamous, heteronormative marriage in fighting the supernatural evil infecting the world.

Wan sidestepped potential, veracity-centered criticisms by leaning hard into genre conventions and tropes, delivering master-class after master-class in scaring audiences through more than just a few well-timed jump scares or shocks. Wan’s earlier entries showed what a talented filmmaker could do with a genre often dismissed or disregarded by non-horror fans or critics. He didn’t elevate horror, but he did remind moviegoers about what horror could and couldn’t do.

Unfortunately, Wan decided not to return for the third entry in the series, handing off the directing reins to relative newcomer Michael Chaves (The Curse of La Llorona). Working from an unfocused script written by David Leslie Johnson-McGoldrick (The Conjuring 2, Red Riding Hood, Orphan), Chaves takes the Warrens through their supernatural evil-fighting ways, but too often relies on over-familiar, repetitive scenes, from the initial exorcism of a seriously disturbed preteen boy, David Glatzel (Julian Hilliard), in early ‘80s Connecticut, through the related case of Arne Cheyenne Johnson (Ruairi O’Connor), a family friend and boyfriend to David’s older sister, Debbie (Sarah Catherine Hook), who subsequently claimed that a body-hopping demon made him murder his obnoxious, bullying landlord, Bruno Keith (Ronnie Gene Blevins), after a particularly bad workday trimming trees.

That much generally fits what’s been documented by relatively credible sources concerning the interrelated Glatzel and Johnson cases, including Johnson’s attempt to claim demonic possession at his trial with the real-life Warrens, but from that point on, The Conjuring: The Devil Made Me Do It turns away from Johnson’s trial or even the outcome and turns into a supernatural murder-mystery of sorts. Ed and Lorraine become detectives more or less, digging up the backstory behind David’s possession, digging about clues about a nearby disappearance that may or may not be connected, and eventually tracing everything back to an occultist with evil intentions, a demon at his or her bidding, and someone’s immortal soul hanging in the balance.

With the Warrens in private detective mode, The Conjuring: The Devil Made Me Do It leaves one key element, the haunted house setting, behind with decidedly mixed results. Chaves periodically loses the narrative thread, skipping haphazardly between an imprisoned Johnson seemingly suffering a mental breakdown and the Warrens, sometimes frantically looking through boxes, other times frantically putting pins up on a wall map of Connecticut, and driving back and forth between multiple locations without a clear deadline or goal in sight beyond the need of the screenplay to make the Warrens look like they’re actually doing something constructive.

To be fair, the back half of The Conjuring: The Devil Made Me Do It features several modestly effective set pieces, including one set in a forest with time-shifting properties, another in a badly underlit funeral home straight out of the underappreciated Dead & Buried, and a third sequence shot in the bland, yawn-inducing villain’s labyrinthine, Silence of the Lambs-inspired underground lair, though both stand out in large part in comparison to the lack of sustained tension, suspense, and paltry scares that preceded them for the better part of an hour.

The Conjuring: The Devil Made Me Do it opens in movie theaters on Friday, June 4, and will be available to stream on HBO Max.