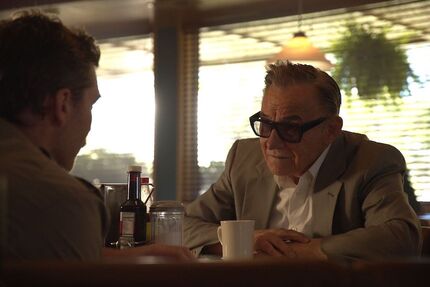 With a career spanning six decades and more than 150 credits, Harvey Keitel has made an indelible mark on American cinema and pop culture. Despite material of wildly varying quality, some of it forgettable, Keitel has rarely given a sub-par performance. More often than not, he’s elevated otherwise disposable material. What’s remarkable isn’t Keitel’s longevity (deserved), but the lack of recognition from yearly awards (undeserved), a testament both to Keitel’s understated performance style and awards groups taking Keitel’s perfectly calibrated performances for granted.

Look no further for evidence of that proposition than Keitel’s latest, Lansky, a dull, cliche-ridden gangster biopic that suffers badly whenever Keitel is offscreen and his co-leads, Sam Worthington as a down-and-out writer looking for one last, big writing score, and John Magaro, as a younger Meyer Lansky going through the biopic motions, are onscreen. When Keitel’s onscreen, playing the 78-year-old Lansky in his last, quiet days in retirement, Lansky (the movie) becomes instantly watchable, sometimes even more just watchable. It becomes almost sublime as Keitel, bringing decades of experience to the underwritten role of Meyer Lansky, adds layers of nuance and subtlety to otherwise banal, occasionally cringe-worthy dialogue.

It’s a major step down, then, when Lansky shifts its focus to Worthington and Magaro for minutes at a time. As the fictional David Stone, a writer eager to write a tell-all moneymaker about Meyer and his life and times, Worthington is fine, if a bit dull. That’s less a criticism aimed at Worthington’s talents as an actor than the bland, surface-deep character he’s forced to play in the film. Stone has a broken marriage, financial problems, and a smattering of self-doubt to overcome as gently pushes Meyer to reveal the bloods-and-bullets details of his past life as an early to mid-20th-century gangster, from a small-timer on the Lower East Side to the only Jewish member in a leadership position of the New York-based Mafia, the so-called “Five Families” made famous by Francis Ford Coppola’s far superior Godfather series.

While Stone falls prey to the questionable interest of an underdressed, younger woman, Maureen (Minka Kelly), living at the same rundown Florida motel he’s made temporary home while he researches and writes his magnum opus on Lansky, an FBI agent, Frank Rivers (David James Elliott), literally knocks on his door, eager to convince a hesitant Stone to essentially become an FBI informant. Rivers hopes Stone will uncover information that will lead the FBI to Lansky’s hidden millions (reportedly $300M) presumably stored in offshore banks or countries like Switzerland with impenetrable privacy laws. For Stone, it’s less a question of loyalty or integrity (he caves quickly to the FBI’s demands) than the risk to his personal safety that worries him more. (Insert multiple yawns here.)

In flashbacks strewn haphazardly throughout the main narrative, Lansky follows the younger Meyer (Magaro) as he predictably rises through the gangster ranks, usually with a little help from his friend, bodyguard, and enforcer, Benjamin “Bugsy” Siegel (David Cade). While Meyer, a wizard with numbers — or so we’re repeatedly told as opposed to shown — keeps his hands clean, Siegel handles the threats, beatdowns, and murders. Proving himself a loyal friend, Meyer keeps Siegel always close by, rewarding him with all the perks and privileges of a top-tier gangster even when it’s probably against Meyer’s best interests. Eventually, though, Siegel’s hedonistic excesses get the better of him and the Mafia’s Big Board decides Siegel poses a liability that must be removed from the ledger.

Working from his own underdeveloped screenplay, director Eytan Rockaway simply can’t decide where Lansky’s focus should be, Old Man Lansky, Stone, or Young Man Lansky/Siegel, so he decided to embrace an all-or-nothing approach. That lack of focus and attention proves all but fatal to the enterprise, especially when Rockaway the over-ambitious screenwriter can't help but fail Rockaway the over-ambitious director. Ambition is fine, welcome even, but here, it proves to be Rockaway’s undoing. Over and over again, Lansky repeatedly stumbles and fumbles over his attempts to wring profundity from a well-worn, over-familiar story. Relying on Keitel was a smart move, but also one with built-in limitations. Even an actor of Keitel’s caliber can’t turn turgid, flaccid prose into poetry.

Lansky will be released on June 25th in select theaters and VOD.