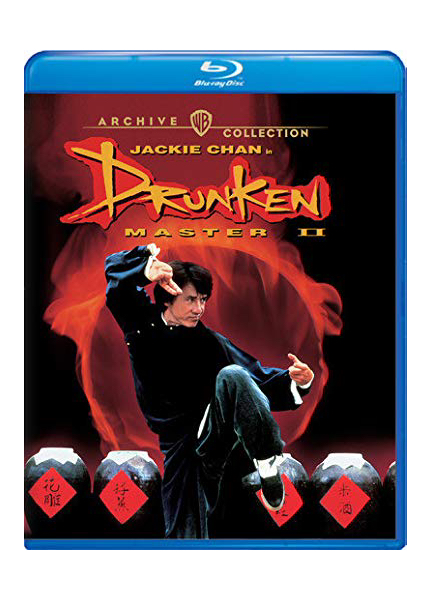 It's a bare-bones release, but what spec-tac-u-lar bare bones! Now, about those alcohol issues and that atrocious ending...

Drunken Master II (Jui kuen II) (1994)
The film is available for purchase from the Warner Archive Collection via Amazon.

A high point in Hong Kong action cinema, Drunken Master remains a kinetic masterpiece in its extended fight sequences, including the epic concluding battle between Ken Lo and Jackie Chan.

It's a radically different interpretation of legendary, real-life character Wong Fei-Hung's life story, which had recently been burnished in the equally spectacular Once Upon a Time in China (1991), starring Jet Li and directed by Tsai Hark.

Returning to a character he had first portrayed in Drunken Master (1979), Chan plays Fei-Hung as a foolish young man who continually frustrates his father (Ti Lung) and bemuses his step-mother (Anita Mui). One day, he backslides even further and indulges in a 'drunken' style of martial arts to defeat the outrageous evil Tsang (Felix Wong), inciting his father to banish him. He reforms, of course, just in time to foil foreigners from stealing priceless Chinese artifacts and prompting his father to acknowledge that 'drunken' martial arts are acceptable, only if used in moderation.

Directed by Lau Ka Leung, who helmed a slew of truly amazing martial arts films over the years, Drunken Master II establishes a broadly comic framework that allows Chan to appeal to the widest audience possible. When fights periodically break out, they're always mesmerizing to watch, especially with the historical perspective that Hong Kong cinema would soon enough begin to retreat from such ambitious productions in the face of the coming Handover from British colonial rule to stifling mainland Chinese rule.

Even so, it takes a leap of faith to ignore completely the worn-out stereotypes, especially the more offensive ideas, like the implicit agreement that 'it's OK to drink, because it makes you more powerful' or the unforgivable final shot, which makes a mental condition out to be a joke. In the overall context of the film, these blemishes detract, without completely halting any possible enjoyment, at least in my own personal experience.

In the 90s, Drunken Master II was relished as a high point, and I found it astounding a few years later to watch it on a low-quality (but legal) VCD. I was in attendance for the U.S. theatrical release in October 2020, when it was re-titled The Legend of Drunken Master. I was extremely happy to see it on a big screen, though that release version cut the final shot almost entirely. It's included here, as are the original English subtitles, as seen in the Hong Kong theatrical release.

The Blu-ray includes three audio tracks -- Cantonese, Mandarin, and English -- along with a choice of subtitles. I've only watched the Cantonese track so far, but I believe all three tracks were post-dubbed. The picture looks very good, though it doesn't always look rock solid; sometimes it appears that adjustments were made to the color.

With this release, Drunken Master II remains on my personal Top 10. The Blu-ray is the best US$17.29 I've spent in a very long time.

Do you feel this content is inappropriate or infringes upon your rights? Click here to report it, or see our DMCA policy.
Anita MuiHong KongJackie ChanLau Ka Leung