Now Streaming: INVINCIBLE, Got Blood If You Want It 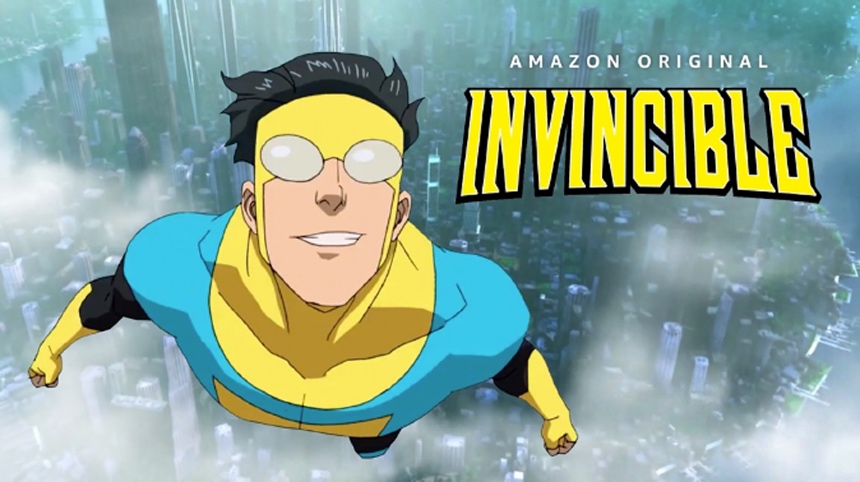 Learning to be a superhero involves much more loss and bloodshed than anticipated.

Created by writer Robert Kirkman and artist Cory Walker -- shortly before Kirkman and artist Tony Moore created The Walking Dead -- for a new line from Image Comics, Invincible, first published in 2003, presented a brightly-colored universe of superheroes with a counterintuitive sense of the explicit violence that was implicit in such a world. The series quickly drew the attention of the major Hollywood studios and Paramount Pictures announced the development of a feature film in 2005.

Meanwhile, Marvel Comics hired Kirkman as a freelance writer, and his work began to be published in 2004. He continued his work for Image Comics, and became a partner there in 2008. In 2010, The Walking Dead television series debuted on AMC, quickly becoming a smash and opening the uber-violent world of zombies to basic cable audiences.

Amazon Studios announced its animated adaptation of the comic-book series in 2018, with Kirkman on board as executive producer. A live-action film version remains in the early stages of development, per EW, with Seth Rogen and Evan Goldberg still involved.

The first three episodes of the series debuted this past Friday. I watched it out of curiosity, to see how its approach to superheroes plays in the many years since the comic-book series debuted, before the live-action Marvel Cinematic Universe began in 2008 with Iron Man and the shadow of superheroes grew to dominate mainstream entertainment.

As a reader of the comic-book series during its first several dozen issues -- until Kirkman's fake-out 'sincerity' in the back-pages of the book, about a certain character's fate, caused me to cancel my subscription -- I admit to harboring an unreasonable prejudice against the series. Watching the first episode, however, I found myself quickly engaged by the bright and bold 2-D graphics and the relationship between young Mark Grayson (voiced by Steven Yuen), his superhero father Omni-Man (J.K. Simmons), and his human mother Debbie Grayson (Sandra Oh).

Near the end of the first episode, however, I was reminded that the original comic-book series was notorious for its violent content, which is reproduced in the television series to the point of irrelevance. So much blood comes gushing out, it ceases to have much impact upon constant repetition, which continues in the second and third episodes; likewise, the torn-apart bodies and depiction of severed body parts has a numbing effect.

I'm sure that the creators and the adapters are driven by their own artistic impulses to make such depictions a calling card for the series. Certainly, it makes the series much more sobering to witness all the explicit carnage that ensues from earth-shaking encounters between murderous criminal invaders and heroic defenders of Earth.

So far, though, the series has not made a case to wade through all the bloodshed for an hour per week. It's an inextricable element of the series, which may attract the majority of viewers, who have a higher tolerance for such things than I do. That is more a comment on my own aging sensibilities than a condemnation of the series, by any means.

Content advisory: there will be blood. Spiced with profanities and severed body parts. Yikes! And more blood.

Do you feel this content is inappropriate or infringes upon your rights? Click here to report it, or see our DMCA policy.
Amazon Prime VideoGillian JacobsJK SimmonsRobert KirkmanSandra OhSteven YeunU.S.