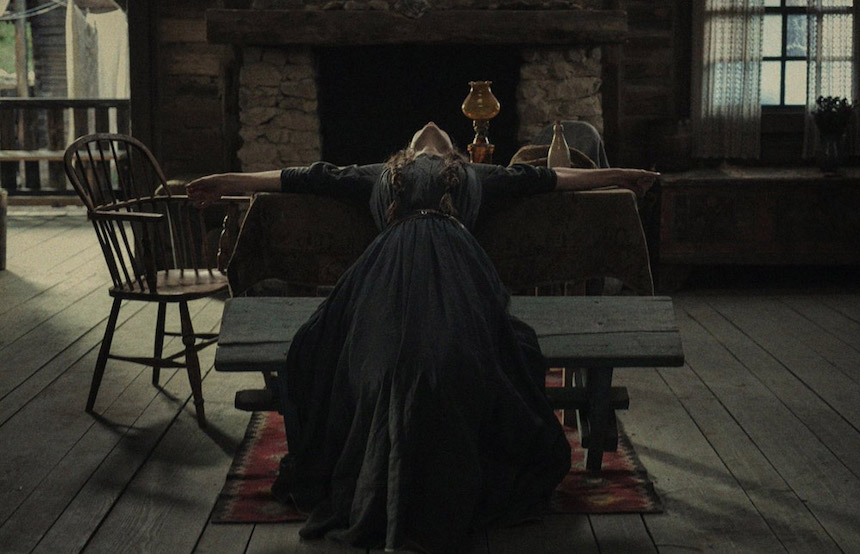 Along with the recently released Ammonite and 2019's Portrait of a Lady on Fire, Mona Fastvold’s (The Sleepwalker) enthralling, mesmerizing second, feature-length film, The World to Come, falls broadly into the burgeoning lesbian period romance sub-genre.

As an addition to a sub-genre that’s become both more mainstream, reaching cross-demographic audiences, and more acclaimed, recognized less for their commercial aspirations than their artistic ones, The World to Come closely follows the second trend, embracing an old-school literary style, complete with voiceover narration, elevated, non-naturalistic speech, and a languid, even leisurely pace attuned to the pre-technological rhythms of frontier life and the inexorable passing of the seasons.

Set in upstate New York circa 1856 (despite appearances, the Old East rather than the Old West), The World to Come revolves around Abigail (Katherine Waterston), a frontier woman and wife to a taciturn, withdrawn farmer, Dyer (Academy Award-winner Casey Affleck, taking a purely supportive role here). She’s also an obsessive chronicler of her inner life and her outer one, jotting down her daily thoughts in a diary ostensibly meant for an audience of one (her), but really meant for an audience of two or more (her, us).

Working from an adaptation co-scripted by novelist Ron Hansen (The Assassination of Jesse James by the Coward Robert Ford, Mariette in Ecstasy) and Jim Shepard (And Then I Go) from Shepard’s short story, Fastvold unapologetically embraces voiceover narration as a recurring device, allowing us to voyeuristically venture inside Abigail’s troubled, if exacting mind, her everyday, unfulfilling life as wife and servant, and more importantly, the devastating loss of the four-year-old daughter that’s created an unbridgeable chasm of grief between Abigail and Dyer, leaving an irrevocably broken relationship in its wake.

The abrupt arrival of Tallie, the wife of another farmer and religious zealot, Finney (Christopher Abbott), to the area functions as the inciting or triggering incident that forces Abigail, if not content with, then reconciled to her life as frontier wife, to reevaluate whether Tallie merely represents a diversion, a potential female friend in an area where other women are in scarce supply or something more meaningful and intimate. Fastvold answers that question definitively early on, but gives Abigail and Tallie’s relationship the space to grow and deepen over time, tying that deepening to the passing seasons (winter to begin, summer to end). As intoxicated as Abigail is with words, their meaning, usage, and potential, she’s just as intoxicated as what the absence of words can convey between two loving women.

Anchored by two quietly reserved, fully committed performances by Katherine Waterston and Vanessa Kirby, The World to Come also stands out for Fastvold's perceptive, unobtrusive direction, earthy, lived-in cinematography, courtesy of André Chemetoff, a subdued, minimalist score composed by Daniel Blumberg, and, of course, Ron Hansen and Jim Shepard’s measured, unhurried screenplay that gives equal weight to Abigail’s words and the visual world around her. While the screenplay’s empathy justifiably doesn’t extend to the abusive Finney, it does to Dyer. Dyer is neither hero nor villain, just a man slowly pushed to the margins of Abigail’s inner and outer life.

Fastvold treats Dyer’s gradual awakening to the true nature of Abigail and Tallie’s relationship less as betrayal than disappointment at his own failings and inability to emotionally reconnect with Abigail.

The World to Come opens today in select U.S. theaters and will be available on VOD March 2, 2021.

The World to Come