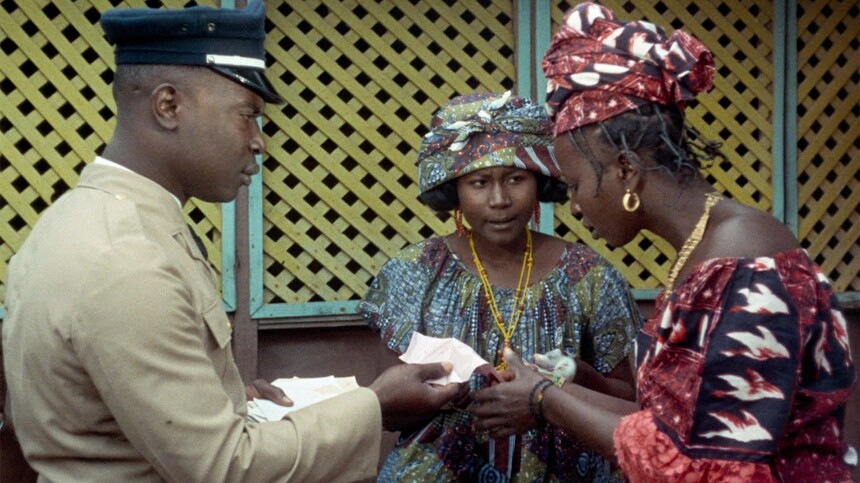 Ousmane Sembène's Mandabi -- the first feature film ever to be shot in an African language, and Sembène's second film to join the Criterion Collection, following their exquisite restoration of Black Girl -- is a work of translation. It adapts Sembène's own novella (reprinted and included in the Criterion edition), which Sembène wrote in French, the colonial language of his home country of Senegal, as he did with all of his works.

He disliked the choice: impossible, indeed, to narrate with his people about the destruction of colonialism and the continuing challenges of post-colonial life by using a colonial language. In cinema, Sembène saw the potential to speak more directly with Senegalese people who may not have been able to read his work (certainly not in French; probably not even had they been written in his native language, Wolof).

His making of Mandabi was part of this dialogue. Its primary language is Wolof (and, as the subtitles do not differentiate, if the audience has an ear for spoken French it's worth paying attention to which characters use which language, and when), and its lead character, Dieng, is illiterate, and at the mercy of a bureaucratic language -- both literal and figurative -- that he can't interpret for himself.

Mandabi concerns the titular money order, which has arrived at Dieng's home, sent by his nephew who is scraping out a living in Paris. He's sent the money home for safekeeping. Dieng and his family -- two wives; seven children -- are broke, and the 25,000 franc imbursement is both a godsend and a major source of trouble. Word of the boon spreads quickly through the neighbourhood, and suddenly Dieng is beset by supplicants on all sides, spouting ridiculous homilies about charity and piety (at best) or about the money Dieng already owes them (the rest of the time).

But it's hardly as simple as that, and in Sembène's satire of a disrupted and corrupt post-colonial Senegal, Dieng's efforts to cash the cheque prove to be a labyrinthine, nearly impossible, task. A pompous boob who has grown far too restive on the privileges afforded to him by an archly patriarchal society, Dieng isn't up to the challenge, and his treatment of his wives and associates makes him, at first, a risible figure. But as Dieng and his plight are passed from office to office, fetch-quest to fetch-quest, the sheer impossibility of his situation wins him our sympathy.

A sharply constructed picture with a keen ear for social dialogue and a beautiful, brightly-coloured palette, Mandabi gets a splendid presentation as it joins the Criterion Collection. The film has been remastered in 4K, and Sembène's bright mise-en-scène pops off the screen in vivid detail. Grain from the 35mm original is all but unnoticeable, and only a handful of aging artifacts remain.

Along with the reprint of the Mandabi novella, Tiana Reid's jacket essay provides useful context around Sembène's work as both a writer and a filmmaker. This is further bolstered by Aboubakar Sanogo's video introduction to the film, a nearly half-hour essay. The disc also includes a 20-minute video conversation between screenwriter Boubacar Boris Diop and activist Marie Angélique Savané, discussing Mandabi's reception in its home country.

Criterion's approach to Mandabi fits nicely with the film's intent, and the disc is worth owning for its thoughtful approach to both the growth of Senegalese cinema, and more widely, how nascent African filmmaking responded to, and reaffirmed, the oral traditions swept aside by European colonizers. There's something intrinsically pure-hearted about Mandabi as a work of storytelling; it's simple enough to behave as a fable, but sophisticated enough to reward rewatching. This release is a worthy successor to Criterion's disc of Black Girl, and a fine testament to an under-represented continent in Criterion's version of the canon.

Now available on Blu-ray and DVD from The Criterion Collection.

Do you feel this content is inappropriate or infringes upon your rights? Click here to report it, or see our DMCA policy.
Ousmane SembeneThe Criterion CollectionMakhouredia GueyeYnousse N'DiayeIsseu NiangSerigne N'DiayesDrama

MANBORG: Canadian Genre Classic Coming to VHS One Time Only

CEREBRUM Trailer: Back Up Your Brain

CEREBRUM Trailer: Back Up Your Brain