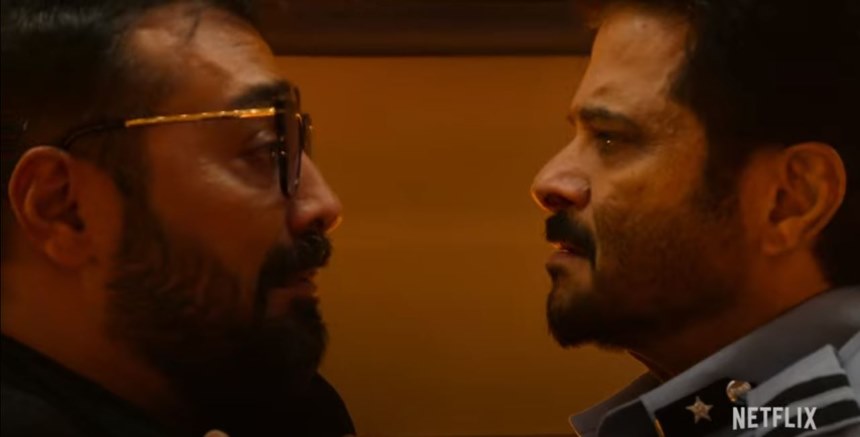 One of my most anticipated films of 2020 finally has a trailer! Wait, scratch that, Vikramaditya Motwane's (Bhavesh Joshi Superhero, Lootera, Udaan, Sacred Games) latest film, AK vs AK has multiple trailers, and they each point to this film being an absolute blast.

Announced at the beginning of the year as a Netflix original in pairing with Anurag Kashyap's Choked: Paisa Bolta Hai, Motwane's latest film looks like a complete and utter mindfuck adventure film pitting two of Hindi cinema's boldest talents against one another in a super tense death match. Iconic director, Kashyap stars as himself, a somewhat arrogant, anti-establishment filmmaker sick of the scourge of nepotism that has rendered much of Bollywood's product substandard. Facing off with Kashyap is '80s-'90s Bollywood heartthrob and action hero, Anil Kapoor (Mr. India, Slumdog Millionaire, 24), a descendent of a real life Bombay acting dynasty, and father to up and coming star, Sonam Kapoor.

Check out this amazing synopsis:

A visionary director, an old school actor, and a camera rolling for 10 hours. Anurag Kashyap, Indian cinema’s enfant terrible, kidnaps Sonam Kapoor and films her father, the evergreen, Anil Kapoor's search for his daughter in real-time, as his next blockbuster. AK vs AK is Vikramaditya Motwane's upcoming film, starring Anurag Kashyap and Anil Kapoor, as themselves. Catch the reality unfold on 24th December, only on Netflix.

Taking inspiration from real world nepotism debates that have been raging in Bollywood for decades, AK vs AK looks like a potential meta masterpiece. The film leans hard into Bollywood inside baseball, but the execution looks exceptional, so while those not familiar with the main players might miss some references, it looks like the ride will still be very worthwhile.

Netflix released a trailer earlier today (top video) that grabbed from moment one, THEN, a little later, Kashyap himself posted a second trailer with all new footage and a completely different perspective. I've got to give it up to Netflix India's marketing department and the Motwane/Kashyap machine, they know how to get people talking, and I cannot wait to see AK vs AK on Netflix, December 24th!